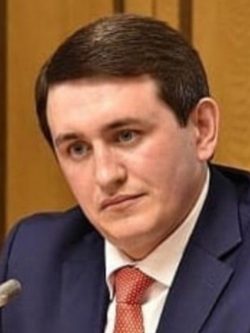 Head of the organization Federal Project for Security and Anti-Corruption in the city of Mytishchi, Moscow Region. Lawyer.

Vitaly Nikolayevich Borodin was born on November 13, 1983, in the village of Ploskoye, Stanovlyansky district, Lipetsk region. After graduating from a military school, he ended up in the Yelets criminal investigation department, and for several years worked as an operative of the Ministry of Internal Affairs and the State Drug Control Service. It is noteworthy that in 2017 he was detained in Moscow on suspicion of trying to sell cocaine. However, this episode did not have long-term unpleasant consequences for him.

In early 2009, Borodin, according to his words, went into business, becoming the director of economic security at Stroyinvest, a company that was engaged in the repair and construction of buildings. The media claimed that this company is affiliated with the former State Duma member from the Fair Russia Party, Igor Kasyanov. Already by 2012, according to SPARK-Interfax, he became a co-owner of this company, and by 2014 he received a share in another company - Spetspromstroy. From 2011 to 2014, Stroyinvest actively participated in public procurement, earning a total of about 160 million rubles.

In 2015, Borodin graduated from the RANEPA Master's program (Department of National Security). The following year, he simultaneously entered the leadership of the Youth Anti-Corruption Project of the United Russia Party, the public council at the Department of Internal Affairs of the North-Western District of Moscow, and the expert council of the State Duma committee on security. At the same time, he unsuccessfully ran for the State Duma as “an independent candidate and a supporter of United Russia.” Not getting into the Duma, Borodin became an adviser to the head of the Ingushetia Republic on a voluntary basis.

In 2017, Vitaly Borodin founded the non-profit organization Federal Project for Security and Anti-Corruption (FBPK). The project, registered in Mytishchi near Moscow, was associated with the structures of United Russia and the Presidential Administration and was called a spoiler of the Anti-Corruption Foundation of opposition politician Alexei Navalny. At the head of the project, Borodin was mainly engaged in writing complaints to supervisory authorities against regional officials, as well as organizing PR campaigns.

Vitaly Borodin was also the deputy head of the Solnechnogorsk city administration, responsible for security issues. However, he lost this position in May 2020, when one of his subordinates was detained while receiving a bribe. At the beginning of 2022, Borodin is the head of the Federal Project for Security and Anti-Corruption organization and is a member of the public council at the Department of Internal Affairs of the North-Western District of Moscow.

As a “social activist” Borodin began with an imitation of the fight against corruption within the limits allowed by the Kremlin. The connection of the Federal Project for Security and Anti-Corruption with the authorities was not particularly hidden. The leadership of the FBPK even provides for the position of the person responsible “for interaction with the Administration of the President of the Russian Federation.” The sources of funding for the organization are not disclosed, but it is obvious that a lot of money was spent on its promotion. The FBPK gathered “anti-corruption congresses” together with organizations playing the role of the Cossacks and the notorious “National Liberation Movement,” and also organized raids on grocery supermarkets and places where the homeless gathered. Dressed in branded polo shirts and down jackets, the activists were invariably accompanied by federal television cameras. At press conferences, Borodin defiantly chastised regional third-tier officials, causing the media to call his activists “political killers” who did dirty work for the mundane interests of regional clan groups.

The former regional operative, who later became the executor of traditionally corrupt public procurements, fully realized himself as a puppet of the Kremlin, playing the role of a fighter with the few independent publications and journalists remaining in Russia. It was from his pen that in 2021 denunciations to the Prosecutor General's Office came out against the Open Media and Project publications, as well as a number of journalists from these media. As a result, on July 15, the Prosecutor General's Office of the Russian Federation declared the activities of the American company Project Media, Inc, the publisher of the Project, “undesirable” in Russia. At the same time, the Ministry of Justice of Russia included five journalists of the webzine in the list of “media - foreign agents,” including the editor-in-chief of the Project, Roman Badanin. Besides, the editor-in-chief of Open Media Yulia Yarosh and her deputy Maxim Glikin, as well as Radio Liberty correspondent Elizaveta Maetnaya, were included in the list of “foreign agents.” Note that the recognition of an organization as “undesirable” entails criminal prosecution of all persons associated with it.

One of the documents claimed that the publications of Open Media were “clearly anti-Russian” and that the webzine itself formed public opinion, “to a greater extent” influencing children. Also, in a letter to the Prosecutor General, Open Media was called “foreign agents engaged in sabotage in our Motherland with impunity.” In a denunciation similar in style to the one against the Project, with reference to the RT article, it was said that the publication was controlled by the US Congress, and “there can be no question of its [in]dependence.”

Ironically, while demanding that journalists be held accountable for allegedly having connections with foreign structures, Borodin himself was trained by the American NED foundation in the past, which was the first to be recognized as an undesirable organization in Russia. Borodin himself spoke about this in an interview with TV-Tver. “I would like to thank Miriam Lanskoy, Senior Director for Russia and Eurasia at the National Endowment for Democracy, for inviting me to cooperate and for helping me pay for my studies. The fund paid 70% of the total amount,” Borodin said in 2019.

Unfortunately, turning meanings upside down has become an unkind tradition in Putin's Russia. So the “brave anti-corruptionist” Borodin, in addition to participating in talk shows and writing denunciations against journalists, is apparently involved in corruption. In 2020, his direct subordinate, environmentalist Denis Afinogentov, was already caught extorting bribes from a businessman. Borodin, as in the case of a gram of cocaine found on him three years earlier, escaped with a slight fright: he lost his position in the administration of Solnechnogorsk. However, during his turbulent activity, Borodin managed to accumulate good assets, recorded, as usual, on the next of kin. So, his mother, a kindergarten teacher in the Lipetsk region, owns a land plot with a house in the elite village of Gorki-2, located on Rublyovo-Uspenskoye Highway in the Moscow region. The plot area is 1000 square meters, the cottage area is 547.6 square meters. According to journalists, such mansions cost an average of 75 million rubles (over a million US dollars). Judging by the Instagram of Borodin and his wife Elena Krayt, they live with two children in this mansion.

The image of a pro-Putin activist would be incomplete without flaunting the silovik past. Borodin is a frequent guest on federal TV channels, where each time he emphasizes the fact of his work in the police and drug control. However, he also notes other “military merits” including “trips” to Syria, Crimea, and Donbas. “You can write down: I am a participant in a military operation in Syria,” says Borodin. — “I flew there a year ago. I was on a work trip in Luhansk, and in Donetsk - I was at the forefront and ran with a machine gun in my hands. Even though I appear in a suit and tie on TV, I can still sometimes pick up a machine gun and for me, I don’t afraid of it. I enjoy it.” It remains to be investigated to what extent there is just self-confident bragging is in these words or real facts of participation in hostilities.