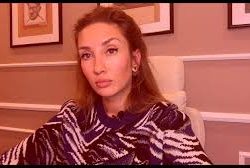 BONDARENKO, Olga Alexeyevna (b. 1989 in Kyiv) graduated from Taras Shevchenko National University in 2011 with a degree in political science. In the same year, she began writing as a journalist, she worked for the internet media Facenews and Gloss. In 2013-2014, she collaborated with From-UA, The Kyiv Times, and Correspondent. In 2013, she became engaged to Anatoly Shariy, a pro-Kremlin video blogger who lives in the European Union and is wanted in Ukraine. In 2017, she applied for membership in the Independent Media Union of Ukraine but was refused as her public statements contradicted to the union’s ethical statute.

In 2018, Olga Bondarenko-Shariy launched her channel on Youtube and began to appear regularly on the air of the pro-Kremlin Ukrainian TV channel NewsOne as an expert. Olga Bondarenko-Shariy is a co-founder and was the second on the list of the Shariy Party in the elections to the Verkhovna Rada of Ukraine on July 21, 2019. According to the election results, the party was not able to overcome the 5% threshold.

Complicity in anti-Ukrainian propaganda and provocations.

Olga Bondarenko is the right hand of the well-known Ukrainian video blogger Anatoly Shariy, who openly supports the opponents of Ukrainian sovereignty. Since Anatoly is wanted in Ukraine for two criminal cases, his wife Olga represents his interests in Ukraine. She also became a co-founder of a party named after him, created specifically for the elections to the Verkhovna Rada in 2019, and advocated the stance complementary to the Kremlin (non-aligned status of Ukraine, resumption of social payments to residents of occupied territories, etc.).

Olga Bondarenko participated in a provocation at the OSCE plenary meeting on freedom of speech on September 11, 2018, in Warsaw. She and several other pro-Kremlin journalists took part in one of the side events dedicated to the situation with the media and the status of journalists in the annexed Crimea, organized by the Permanent Mission of Russia to the OSCE. However, the delegation from the Russian Federation devoted most of its speeches to concerns about the situation with freedom of speech in Ukraine. The Russian delegation was followed by representatives of the pro-Russian administration of Crimea, as well as Kremlin-friendly Ukrainian journalists, including Bondarenko-Shariy. They unanimously claimed that there was supposedly no freedom of speech in Ukraine, they spoke about harassment and censorship by the Ukrainian government. Such statements were accompanied by applause from the Russian delegation. Besides, the Russian propaganda machine used Bondarenko’s demarche to develop the thesis of “rampant Nazis in Ukraine” and to hush up the full-scale attack on freedom of speech in Russia itself as well as in the occupied Crimea.