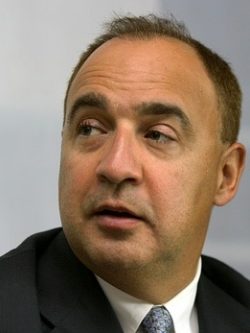 BLAVATNIK, Leonard (Leonid) Valentinovich (b.1957) is a British and American tycoon with strong Russian ties. He was born in Odessa and grew up in Yaroslavl and Moscow, in 1978 he emigrated to the United States with his parents. In 1981, Blavatnik got US citizenship. There he studied at Columbia University, where he received a master's degree in computer science. In 1989, he graduated from Harvard Business School. While studying, in 1986, he founded Access Industries, an investment company. In 1987, Blavatnik met with his old fellow from Moscow Vekselberg at an oil exhibition. Two years later, they created a joint venture that was engaged in the supply of computer equipment to the USSR. Encouraged by the success, in 1990 the friends established the Renova investment company, which was engaged in the export of Russian raw materials. Renova was able to gain control of the Ural and Irkutsk aluminum smelters, making it one of the ten largest metallurgical enterprises in the world (SUAL).

Since 1997, Access Industries together with Vekselberg’s Renova and Mikhail Fridman’s Alfa Group acquired 40% of the Tyumen Oil Company (TNC) from the government. After the 1998 crisis, AAR's shareholder group (Access/Alpha/Renova) acquired another 50 percent of TNC. Blavatnik's company is also a co-owner of Warner Media Group, Russian Amedia, and STS Media. Blavatnik also owns or has shares in several media and telecommunication assets outside of Russia. Blavatnik is known as a buyer of luxury real estate. In 2004, Blavatnik acquired a mansion in the downtown of London, Kensington Palace Gardens. A little later, he bought a chain of five-star hotels in France. In 2007, he acquired land in Hollywood worth $625 million. In 2014, Blavatnik bought 13-room two-level apartments in Manhattan for $77.5 million. His wealth is estimated at $20 billion (2019).

Leonard Blavatnik is actively investing in charity through his Blavatnik Family Foundation. In 2010, he donated £75 million to the Blavatnik School of Government at Oxford University. Harvard, Stanford, the University of Pennsylvania, the Hudson Institute and a few international Jewish organizations also accepted his money. In recent years, he has significantly increased his political donations in the United States.

Illegal enrichment at the expense of Russian taxpayers due to his close relations to the Kremlin; corruption of the Western elites in the interests of the Putin regime.

According to a number of experts, Leonard Blavatnik earned the main assets in Russia, thanks to his friendship with Viktor Vekselberg and Mikhail Fridman, as well as his close relations to the Russian leadership and FSB, and personally making a profit from their illegal actions.

According to Ilya Zaslavsky, a former consultant to TNK-BP, the best illustration is the sale of TNK-BP to Rosneft, as a result of which Blavatnik received about $7 billion: “Blavatnik and his oligarchic comrades from the Alfa Access Renova (AAR) consortium joined forces with Russian security services and other government agencies, including the main pro-Kremlin media in a government-sponsored baiting campaign to oust BP from the TNK-BP joint venture in 2008-2009.” As a result, “in 2012-2013, the government-controlled Rosneft bought back a stake from Kremlin-related oligarchs for $30 billion in cash through payments via offshore accounts, while the market value of AAR’s stake was about $20 billion.” Blavatnik is not just a businessman, but an insider of the Russian system. Zaslavsky also indicates that Blavatnik’s company Amediateka is featured in the Panama Papers as having a joint venture with former Russian Deputy Interior Minister Alexander Makhonov.

Huge scandals were caused by Blavatnik's charity projects, in particular, the investment of £75 million to Oxford University, which not only accepted his money but also named a new unit after him. The decision to accept Blavatnik’s money in Oxford was made by people implicated in oligarchic scandals and financial fraud themselves. According to Ilya Zaslavsky, he uses his philanthropy to expand his access to the Western political circles. Blavatnik, along with two other American businessmen, Simon Cooks and Andrew Intrater contributed nearly two million dollars to Donald Trump’s political funds during and after his election campaign. All three are united by relations with large Russian business and the president of the Skolkovo Foundation, Viktor Vekselberg, who is considered one of the richest people in Russia. Dr. Louise Shelley, director of the Terrorism, Transnational Crime and Corruption Center at George Mason University, is confident that these contributions were approved by the Kremlin.

From Russian oil to rock’n’roll: the rise of Len Blavatnik

Why comrade Sir Leonid (Len) Blavatnik is a Putin oligarch and why Hudson Institute, Harvard, Oxford and other entities should not accept his tainted money

A Soviet-Born Billionaire Is Buying Influence at US Institutions