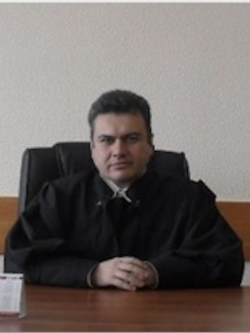 Judge of the Kirovsky District Court of Ufa

Bashkir judge Azamat Bikchurin became infamous in November 2021 when he ruled to arrest Lilia Chanysheva, the former head of Navalny's headquarters in Ufa, in connection with the creation of an extremist community. However, earlier he took part in the consideration of politically motivated cases. So, in June of the same 2021, in the Kirovsky District Court of Ufa, the trial under the chairmanship of Judge Bikchurin began in the criminal case of activist Ramila Saitova, accused of publicly calling for extremism. Interestingly, Ms. Saitova immediately demanded the dismissal of the judge because, according to her, Azamat Bikchurin at one time participated in the weaning of her business. In 2002 and 2003, while working at the Sovetskiy District Court of Ufa, he ordered the arrest of Ramilia Saitova, who was then involved in hooliganism and intentional harm to her health of moderate severity. On November 3, 2021, Bikchurin sentenced activist Saitova to three years in prison.

20 minutes - this is exactly how long it took for Judge Bikchurin to decide on the arrest of Lilia Chanysheva. Despite her pregnancy statement, the judge considered it impossible to choose a milder measure of restraint, and on November 21 she was transferred to the Moscow SIZO-6. The basis for choosing such a strict measure of restraint was a report from an employee of the Center for Countering Extremism (CPE) that the activist was allegedly going to leave the territory of Russia and continue to participate abroad in the activities of the Anti-Corruption Foundation and Navalny's headquarters that were previously banned in Russia. Later, on December 23, the Basmanny District Court of Moscow extended her detention until April 9, 2022.

Note that Lilia Chanysheva headed Navalny's headquarters in Ufa before the recognition of organizations associated with Navalny as extremist. After the dissolution of Navalny's headquarters, she retired from politics but decided to stay in Russia. The activist is accused of participating in the creation of an extremist community (part 1 of article 282.1 of the Criminal Code of the Russian Federation) solely in connection with the legal political activity that she was engaged in before the prohibition of Navalny's structures. Lilia Chanysheva's lawyer, Sergei Makarenko, said that he considers the case “the fantasies of the investigator to please the bosses from the Kremlin.” In his opinion, Navalny's headquarters and, in particular, the one headed by Lilia Chanysheva were engaged in “absolutely legal opposition activities.”

Judge Bikchurin denied Chanysheva's lawyers all requests, including a request for access for the accused's husband, parents, and brothers to the courtroom. It is noteworthy that the testimony against Chanysheva, in particular, was given by the Ufa blogger Arslan Nigamatianov, who had recently become a defendant in a criminal case of hooliganism. The lawyer noted that the blogger had never collaborated with Navalny's headquarters in Ufa, and all his testimonies relate to the activities of another headquarters - in Chelyabinsk, of which he was a volunteer. The Memorial Human Rights Center considers Lilia Chanysheva a political prisoner.