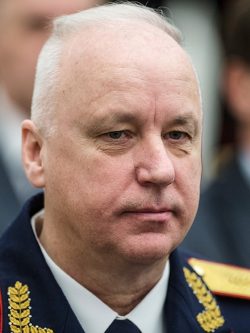 Chairman of the Investigative Committee of Russia (2011 — to date), Member of the National Anti-Terrorism Committee (2013 — to date)

BASTRYKIN, Alexander Ivanovich (b.1953) is a current Chairman of the Investigative Committee of Russia and one of the key figures in suppressing opposition and concealment corruption in Putin’s Russia. In the early 1970s, he studied Soviet Law at Leningrad State University (LSU) together with Vladimir Putin. After graduation, he worked as a criminal investigator and Law professor at LSU. After Putin came to power, in 2001 he headed the General Directorate of the Ministry of Justice for the North-West Federal District. In 2006, he was appointed Deputy Prosecutor General of the Russian Federation. The next year, he became the First Deputy Prosecutor General — Chairman of the Investigative Committee at the Prosecutor's Office of the Russian Federation. He continued to be the Chairman of the Investigative Committee when it became an independent body in 2010.

Active support for the usurpation of power by Vladimir Putin, corruption, the leadership of the punitive governmental body, repressions against the opposition, abuse of office.

Bastrykin openly interfered in the activities of the media, threatening reprisal to the chief editor of Novaya Gazeta Sergei Sokolov. On June 4, 2012, Bastrykin invited Sokolov on a board of an airplane flying to Nalchik. The head of the Investigative Committee demanded the journalist to apologize for his article. The article was about the verdict to Sergei Tsepovyaz (the person involved in the mass murder case in the town of Kushchevskaya), who escaped with a fine of 150 thousand rubles (approx. $5,000) for concealing this crime. After the plane landed, Bastrykin’s guards put Sokolov in a car and drove into the forest without explanation. There, Bastrykin asked the security service to leave him alone with the journalist. During their conversation, he criticized Novaya Gazeta, mocked the murdered journalist Anna Politkovskaya, and threatened Sokolov’s life.

Alexander Bastrykin was repeatedly accused of corruption. In 2008, Alexander Khinshtein accused Bastrykin of being the founder and director of the Czech company LAW Bohemia. In 2012, Alexei Navalny repeated these allegations, indicating that Bastrykin had retroactively sold his stake in a Czech company, accusing him of falsifying powers of attorney necessary to sell a stake in the company and demanding his resignation.

On January 9, 2017, under the Magnitsky Act, the United States Treasury's Office of Foreign Assets Control updated its Specially Designated Nationals List and blacklisted Aleksandr Bastrykin, which froze any of his assets held by American financial institutions or transactions with those institutions and banned his traveling to the United States.

U.S. to Blacklist 5 Russians, a Close Putin Aide among them

The Rise and Probable Fall of Putin’s Enforcer