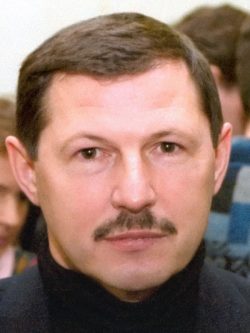 BARSUKOV (KUMARIN), Vladimir Sergeyevich (b. 1956) after serving in the army, in 1976, entered the Leningrad Institute of Precision Mechanics and Optics. Soon, however, he was expelled from the university for absenteeism and began to work as a bouncer in the Leningrad cafe Windrose. It is noteworthy that in 2001 he graduated from the institute, which had by then become a university, and received the qualification of a specialist in laser technologies. In the early 1980s, he worked as a freight forwarder and bartender at the Tallinn Cafe in Leningrad. At the same time, he joined one of the city gangs. In 1985, Kumarin went to jail for the first time. He was convicted of hooliganism, illegal possession of firearms, and forgery of documents.

After being released on parole in 1987, he decided to form his own team of his compatriots from Tambov. So, quite quickly he managed to create a Tambov gang. After the rivaling Tambov and Malyshev gangs broke out shootouts in Devyatkino in 1989, more than 70 Tambov gangsters were put on trial. Kumarin was convicted of extortion in 1990, having received four years in prison with confiscation of property. In 1993, he was released under an amnesty and returned to Petersburg where he continued to lead the Tambov group. In June 1994, an attempt was made on him, due to which Kumarin lost his right hand.

In 1995 (according to other sources, in 1996), Kumarin, taking his mother’s maiden name, Barsukov, returned from treatment in Europe to St. Petersburg. In 1996, he became one of the co-founders of the oil refinery OJSC Kirishinefteorgsintez, and from 1997 to 2000, he served as vice president of the Petersburg Fuel Company (PTK), which had strong ties with the governor’s office of St. Petersburg. In July 1998, he became Vice President of PTK, Deputy Chairman of the Board of Directors. In 2002, Barsukov left the company.

In 2000, publications appeared about the ties of the Kumarin group in the 1990s with the then chairman of the St. Petersburg City Hall Committee on External Economic Relations, Vladimir Putin, who from 1997 to 2000 was a consultant and member of the advisory board of Russian-German real estate company SPAG (St. Peterburg Immobilien und Beteiligungs AG; the city hall was a co-owner of the enterprise, according to Le Monde). They indicated that the group led by Barsukov-Kumarin “established control over the SPAG and used it to launder money.”

In 2007 there were raider seizures of several St. Petersburg stores. Kumarin participated in their organization and was arrested on August 22 for fraud and other related crimes. Prior to his arrest, he was an assistant to State Duma member and journalist Alexander Nevzorov. On November 12, 2009, the court sentenced Vladimir Barsukov (Kumarin) to 14 years in prison, other persons in the case received between 5 and 15 years. On August 18, 2016, by the verdict of the St. Petersburg City Court, Barsukov-Kumarin was convicted of an attempt on the co-owner of the St. Petersburg oil terminal Sergey Vasiliev and sentenced to 23 years in prison. In March 2019, a court in St. Petersburg sentenced Vladimir Barsukov-Kumarin to 24 years in a maximum-security penal colony and fined him one million rubles. He was found guilty under an article on the creation of a criminal community. In August 2015, ex-State Duma member Mikhail Glushchenko, accused of organizing the murder of Galina Starovoitova in 1998, said in court that Barsukov-Kumarin was the paymaster of the crime. In April 2019, the FSB investigation service in St. Petersburg indicted Barsukov in the case of the murder of State Duma member Galina Starovoitova.

Vladimir Barsukov-Kumarin, who called himself “the night governor of St. Petersburg,” was for a long time the most influential figure in the criminal world of the northern capital, gaining the infamous label of a “gangster Petersburg.” Since the early 1990s, the gangster and the legal world of St. Petersburg have been interconnected as communicating vessels, and, according to numerous evidence, Barsukov-Kumarin had strong ties with the city administration, and, in particular, with another Vladimir, Putin, who headed the Committee on External Economic Relations of the city ​​administration.

In 2000, the French Le Monde and the Russian Sovershenno Sekretno, and in 2001, the Italian La Repubblica and the American Newsweek (dated 09/03/2001) wrote about Vladimir Putin’s relationship with the Kumarin group through SPAG, the Western managers of which faced a criminal case on suspicion of money laundering of the Colombian drug cartel. In 1992, Putin, together with his friend from the Ozero (Lake) cooperative Vladimir Smirnov, convinced a group of Frankfurt investors to create the German company S. Peterburg Immobilien und Beteilgungen Aktiengesellschaft AG (SPAG), which, through subsidiaries of Russian-German companies, was engaged in investing in St. Petersburg real estate. Putin joined the SPAG advisory council, where he remained until his election as president of the Russian Federation.

Media sources indicated that the group led by Barsukov-Kumarin “established control over SPAG and used it to launder money.” It purchased real estate in St. Petersburg using the money of the Colombian drug cartel, and Barsukov was a member of the board of directors of SPAG’s Russian subsidiary, Znamenskaya JSC. In 1999, SPAG was inspected by the German intelligence service, and its head, Rudolf Ritter, was charged with money laundering for both Russian criminal groups and the Colombian Cali cocaine cartel. During the search, millions of Swiss francs were found in cash, and Ritter’s employees, as the prosecutor’s office found out, were transporting luggage full of Swiss francs to Liechtenstein.

There is other evidence of a connection between Putin and Kumarin. Thus, the security agency Reef Security, controlled by Barsukov-Kumarin and the aforementioned Smirnov, guarded the famous elite cottage cooperative Ozero (Lake) in the Leningrad Region, whose director was Smirnov, and among the founders were Vladimir Putin and his closest associates. Together with Vladimir Smirnov, Barsukov-Kumarin in 1995-1996 established control over the Petersburg Fuel Company (PTK), the initiator of which was the vice-mayor of St. Petersburg Vladimir Putin. Barsukov-Kumarin became vice president of PTK. It is believed that several other people involved in the Tambov-Malyshev group were also related to the PTK, and bloody criminal showdowns were carried out over its assets in the 1990s. So, in 1996, its president Dmitry Filippov was killed. At the end of March 2004, Barsukov was questioned by the German prosecutors about the SPAG case, but no official charges were brought against him. It should be noted that the city prosecutor's office formally interrogated him on behalf of their German colleagues with the participation of their representatives.

Kumarin was famous for his ambition and uncontrollability, so with the advent of Putin, the release of several compromising publications, and the ongoing investigation against him, he became a toxic asset. According to wiretaps from the case against the Tambov-Malyshev group in Spain, the new leader of the group, Gennady Petrov, stated that Kumarin had been imprisoned by order of the “king.” Note that Petrov himself had close ties to Putin's inner circle. However, Kumarin himself, in an interview from prison, denies being acquainted with Putin. It seems unlikely that he will be released or share the truth about Putin’s connections with the mafia while Putin is in power.

Testimony of Israeli businessman Maxim Freidzon, who worked in St. Petersburg in the 1990s: “Kumarin is a criminal with very great simplicity in making harsh decisions. At first, Putin was Tambov’s serviceman from the city hall. Moreover, he served both Kumarin and Kostya Mogila, who was at war with him. Putin served them and was afraid of both. Kostya was killed, and Kumarin is in prison. [...] Putin is tied to him with blood and cocaine money, which were laundered through the sale of petroleum products and other urban projects.”

The Times – Russia’s ‘Al Capone’ sneers at his trial

A Mobster Trial, and a Flash of a Violent Past