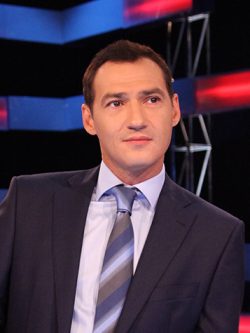 BABAYAN, Roman Georgievich (b. 1967 in Baku) is a host of a talk show Pravo Golosa (Right to Vote) on the TV Center channel, chief editor of the Govorit Moskva (Moscow Speaks) radio station. Born into an Armenian-Russian family, he studied at the Azerbaijan Polytechnic Institute and served in the Soviet occupational army troops in Hungary. In 1988 he moved to Moscow, where he graduated from the Moscow Institute of Communications in 1991 with a degree in radio engineering. In the same year, he began working as an engineer in the technical directorate of Radio Russia belonging to the state media holding VGTRK. In 1993, he became a correspondent for VGTRK. From 1994 to 2000, he worked for the Vesti newscast, starting as a correspondent and becoming a political observer. In 2000, Babayan switched to Channel One and became a political observer for the Novosti and Vremya newscasts.

From 2005 to 2012, Babayan worked on Channel Three, he was the chief editor of the Conclusions and Main Topic programs, and in 2008 became the anchor of the City newscast. From December 2009 to the present, she has been hosting the propaganda talk show Pravo Golosa, first on the Channel Three, and after its closure in December 2012, on the TV Center channel owned by the Moscow government. On June 24, 2019, Roman Babayan headed the Govorit Moskva radio station. In 2016, Roman Babayan unsuccessfully ran for the State Duma from the Just Russia party. In 2019, he became a “self-nominated candidate” for the Moscow City Duma, with administrative support from the Moscow Mayor's Office and United Russia party. His main rival from the opposition in the constituency, Dmitry Gudkov, was not allowed to run in the election. Roman Babayan is the author of several propaganda films.

Roman Babayan, despite his work on the secondary TV channel, is among the leading propagandists of the Kremlin. Their role is to provoke conflicts between the participants of the talk shows, to increase the degree of aggression and to expose opponents of the Kremlin’s policy as stupid, weak and hot-tempered people. Instead of being objective mediators, the hosts side exclusively with the Kremlin’s stance. Such talk shows usually involve the already selected pool of “liberal oppositionists” and “foreign experts” as whipping boys, while the real opposition speakers are in the stoplists on federal TV channels. After the beginning of Putin’s third term and, in particular, the Kremlin’s armed aggression against Ukraine, the fake talk shows serve to increase the degree of intolerance and moral disorientation in the society. Besides, they devalue political discussion, reducing it to pointless loud fighting on TV.

Roman Babayan is a typical example of the genre. Starting from the end of the 1990s, he was already a supporter of conspiracy theories and authoritarian rule. In his documentaries for Channel One, Iraq. One Hundred Days Without Saddam (2003), Santiago. Chile. 30 Years Later (2003) and American Formula for Freedom (2004), he expressed sympathy for dictators Saddam Hussein, Salvador Allende, and Slobodan Milosevic, he took part in setting up the public opinion in favor of strengthening authoritarianism in Russia. His broadcast The Tskhinvali Labyrinth (2004) shortly after the Rose Revolution in Georgia also made it possible to convey the Kremlin’s point of view on the conflict in Georgia to the general public and to prepare an informational excuse for Russia's armed aggression against Georgia in 2008.

As a presenter, Babayan invariably follows the official Kremlin propaganda position, covering the topics and expressing the opinion that is currently beneficial to the Presidential Administration. On his talk show, he regularly screams at his guests and even engages in fights.

Babayan declared his political ambitions outside the framework of talk shows too. In 2016, he (unsuccessfully) ran for the State Duma. In 2019, thanks to the owners of the TV channel, the Moscow government, he registered as a candidate for the Moscow City Duma and got elected. His main rival from the opposition in the constituency, Dmitry Gudkov, was not allowed to run in the election.