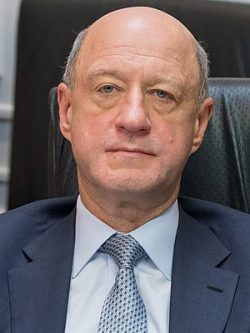 Deputy Chairman of the Federation Council Committee on Foreign Affairs, Special Representative of the President for Cooperation with Organizations of Compatriots Abroad.

BABAKOV, Alexander Mikhailovich (b. 19653 in Chisinau) graduated from the Economics Department of Moscow State University, Department of Economics of Foreign Countries, in 1985. After graduation, he entered graduate school and later defended his Kandidat thesis on “State regulation of agricultural relations in developing countries.” In 1988-2003 he was engaged in scientific and teaching activities at the Department of Economic Theory of Moscow State University. Alexander Babakov is a candidate of economic sciences, author of several monographs on economic issues.

On October 28, 2006, he was elected Secretary of the Presidium of the party “Just Russia: Homeland/Pensioners/Life.” On December 2, 2007, he was elected a member of the State Duma of the 5th convocation. He was a Deputy Chairman of the State Duma, a member of the Just Russia faction. On July 21, 2011, he left the party, and on December 4 of the same year, he was elected to the State Duma of the 6th convocation on the list of the United Russia party. In 2014, he was included in the EU sanctions list due to Russia's actions in Crimea. In May of the same year, he was included on Canada's sanctions list. On September 28, 2016, he was elected representative of the Federation Council from the Tambov Region. He is married and has three children.

Stanislav Belkovsky expressed suspicion of Babakov organizing contract killings of mafia boss Maxim Kurochkin, with whom, according to media reports, Babakov had been conducting a joint business for a long time. Together with Kurochkin, according to Ukrainian media reports, he led the Luzhniki organized crime group, which is associated with Moscow ex-Mayor Yuri Luzhkov. There have been repeated allegations of Babakov's involvement in raider seizures of real estate in Ukraine, including at official press conferences. Member of the Committee on Combating Corruption, MP for Ukraine Yuriy Derevyanko said that Babakov could be involved in the financing of terrorism in Ukraine. The disruptive effect on democracy is one of the main channels of Russian corruption influence in Ukraine.

Babakov has a close relationship with Russian politician Dmitry Rogozin. According to some reports, he is directly related to the Russian special services and has access to state secrets as his companies fulfill orders of the Ministry of Defense of the Russian Federation for cryptographic encryption and maintenance of nuclear submarines. Since 2003, the Ministry of Defense of the Russian Federation has appointed TERNA-SB, a subsidiary of the TERNA group, one of the founders of which was Alexander Babakov, as the managing company of the Arctic Military-Environmental Cooperation program. The company is licensed by the FSB to work with state secrets, and, according to Novaya Gazeta, is close to the Russian military. Among the facilities at which it carried out the work are the General Staff, the General Staff of the Navy, and the base of nuclear submarines in Kamchatka.

During his last MP term, Babakov became the chairman of the Duma commission on legal support for the development of organizations of the military-industrial complex of the Russian Federation. On June 17, 2012, Russian President Vladimir Putin appointed Babakov as his special representative for cooperation with organizations of compatriots abroad. In this post, according to media reports, he participated in the financing of the French far-right party Popular Front. “On November 22, 2014, in the article “The National Front receives Russian millions,” the Mediapart website reported that Marine Le Pen’s party received the first tranche of a loan totaling 9 million euros from the First Czech-Russian Bank (PCRB). The mediators in obtaining the loan were allegedly a member of the European Parliament Schaffhauser and the member of the State Duma, the special representative of the President of Russia for cooperation with organizations of compatriots abroad, Alexander Babakov,” Novaya Gazeta reports.

Regarding Babakov’s political ties in Ukraine, the media note that the Luzhniki organized crime group, one of whose leaders was Babakov, came to Ukraine in the late 90s. Then, through Igor Bakay, the former head of Naftogaz of Ukraine, they contacted the associate of Vladimir Putin, Viktor Medvedchuk. It was noted that the Luzhniki led the business through forceful seizures, torture, threats, and kidnappings. With the assistance of Russian Ambassador to Ukraine Viktor Chernomyrdin, and tone of the first ideologists of the Russi Mir, Gleb Pavlovsky, they created the Russian Club, which included Kuchma, Medvedchuk, and Yanukovych.

In the late August 2016, one of the main critics of Alexander Babakov, who published revealing materials about his actions in Ukraine for several years, Alexander Shchetinin, was found dead in his apartment shot in the head. However, officially, the connection of this death to Babakov has not been revealed.

At the end of March 2017, after the assassination of former State Duma member Denis Voronenkov in Kyiv, Ukrainian political expert Alexandra Reshmedilova noted that the murder occurred at the exit from the Premier Palace Hotel, owned by “one of the leaders of the Luzhniki gang, and now a special representative of Vladimir Putin on interactions with organizations of Russians abroad, Alexander Babakov.” “Activists have repeatedly demanded that the SBU respond to the fact that FSB officers can work under the cover of a hotel in Kyiv. Alexander Babakov is directly related to the Russian special services, has access to state secrets, besides, his companies fulfill orders of the Ministry of Defense of the Russian Federation for cryptographic encryption and maintenance of nuclear submarines,” she emphasized.

According to data published by Alexei Navalny at the end of December 2013, Alexander Babakov has undeclared real estate in France, in particular, an estate in the French commune Saint-Léger-en-Yvelines, 37 km south-west of Versailles, with an area of ​​10.9 hectares, SCI DU CHATEAU DU CLOS RENARD. To own the mansion, a special company Du Chateau De Saint Leger was created, which in 2009 was acquired by the wife of the politician, Irina Babakova. The approximate cost of the estate is estimated by Navalny at $15.7 million (490 million rubles). Moreover, this estate is included in the register of the historical and cultural heritage of France. Also, according to Navalny, Babakov owns an apartment in Paris at 169 Rue de l'Université, Paris.

According to the Panama Papers, from 2007 to 2011, Babakov owned the offshore AED International Limited. In September 2011, the company was transferred to his 23-year-old daughter. This happened a month before the parliamentary elections when he had to submit a property declaration.