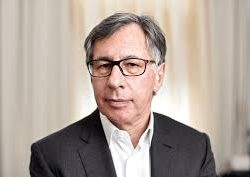 Chairman of the Board of Directors of Alfa Banking Group (commonly known as Alfa-Bank), co-founder of the LetterOne investment firm.
Mr. Pyotr Aven was born on 16th March 1955 in Moscow. In 1997 he graduated from the School (Faculty) of Economics and received his graduate degree at the Department of Mathematical Methods in Economic Analysis. In 1980 he received a postgraduate degree in Economics (Candidate of Sciences diploma, quasi-equal to Ph.D. in Economics). During his studies at Moscow State University, he met Mr. Mikhail Fridman, who later became his business partner.
From 1981 to 1988 he worked for the Institute of System Studies of the State Committee for Science and Technology and for the Academy of Sciences of the USSR, first as a junior research fellow, and later as a senior research fellow, where he met Mr. Yegor Gaidar. In 1989 he left the USSR holding a contract with the International Institute for Applied Systems Analysis, located in Laxenburg, Austria. There he also worked as a research fellow and held this position until 1991.
In autumn 1991 Mr. Yegor Gaidar offered him the position of chairman of the Committee on Foreign Economic Relations, simultaneously with the position of First Deputy Minister of Foreign Affairs. In 1992 he was appointed as the head of the newly-created Ministry of Foreign Economic Relations of the Russian Federation. At the same time, he was named as the official representative of former Russian President Boris Yeltsin in the Group of Seven (the most advanced economies and developed states in the world).
In December 1992, after Gaidar’s resignation, Pyotr Aven also left his office. During the same month, he was appointed as an adviser to the Corporate President (quasi-CEO) of the JSC LogoVAZ Mr. Boris Berezovsky. He held this position until the end of February 1993.
In 1993 Pyotr Aven created and led the consultancy firm FinPA (Finances of Pyotr Aven). FinPA regularly consulted Mikhail Fridman’s company Alfa Bank. In 1994 he exchanged 50% of total shares of FinPA to 10% of Alfa Bank’s total shares by bilateral stock swap. The same year he was appointed as the Corporate President of Alfa Bank.
In 1998, in addition to banking operations, Pyotr Aven was elected to the Board of Directors of Samara-based OJSC Aviakor, and was appointed as the chairman of the Board of Directors of the television holding CJSC Alfa-TV and CJSC Set' Televizionnykh Stantsiy (STS) / CTC Media. Since 2001 Mr. Aven occupies top managerial positions at Alfa Banking Group. Since 2007, he has also been the Chairman of the Board of Directors of the insurance company Alfa Strakhovanie.

Criminal abuse and misconduct in public office, corruption, economic and financial crime, gross interference in internal affairs of the foreign sovereign state.
In the early 1990s, there had been proven allegations in the press that Mr. Pyotr Aven, “using his official public position and classified inside information," was supposed to perform numerous transactions with the USSR's public debt. According to the media, he “…, without any shame and embarrassment, received kick-back commissions and even expensive gifts for concluding deals and facilitating transactions in foreign trade for foreign companies”.
He was also alleged to have implemented lobbying functions for the Russian Government, aimed at making the decision that customs duties on imported cars had to be increased sharply. The primary beneficiary was supposed to be the JSC LogoVAZ of Mr. Boris Berezovsky.
In 1998 journalists of the Sovershenno Sekretno newspaper accused Pyotr Aven of illegal acquisition of a state villa residence in Barvikha (Moscow-region settlement), which had been previously owned by Aleksey Tolstoy. According to the journalists, Director General (CEO) of the State Unitary Enterprise Zhukovka Health and Wellness Centre Facility Vladimir Ryabenko officially applied for underestimated value sale of the villa residence to Pyotr Aven. The total relief and final cost were supposed to be 200,000.00 USD due to his so-called investments in the capital construction of Zhukovka facilities. Attention was also drawn to the fact that the payment order, confirming the sale transaction, showed the use of services of Alfa bank by both the parties – the Payer and the Recipient. The payment for the acquisition of the residence was converted into investment contribution, free of additional taxes and fees.
In 1997 former Head of Nizhnevartovskneftegaz (a subsidiary enterprise of the TNK/ Tyumen Oil Company company) Viktor Paliy accused Alfa Bank of predatory and illegal privatization of TNK/ Tyumen Oil Company. Pyotr Aven, who was responsible for government relations at the highest level, was supposed to collude with Chairman of the State Committee for State Property Management Goskomimushchestvo Alfred Kokh, who helped him to win this bid and buy TNK’s shares with significant cost relief. Thus, the State Treasury had lost about 1.4 bln USD.
In 2006 IPOC Capital Partners, Ltd. brought legal action to the U. S. District Court for the Southern District of New York (S.D.N.Y.) against Alfa Banking Group, in particular, against Pyotr Aven, Mikhail Fridman, Leonid Rozhetskin and Hans Bodmer – the latter was the former head of a Swiss legal firm, called Von Meiss Blum & Partners, based in Zurich, which was used as an agent in regard to the sale of 25.1% of MegaFon’s shares in 2003. The lawsuit was filed under the Racketeer Influence and Corrupt Organizations Act (RICO Act). According to IPOC Capital Partners, Ltd., actions of the respondent party had led to the creation of an extensive network of misappropriated funds and shares’ illegal acquisition. These actions seriously affected and damaged IPOC Capital Partners, Ltd. So, the aggrieved party reclaimed stolen shares and the payment of 150 mln USD.
In 2017 BuzzFeed (an American Internet-media) published a report, based on the information of the former SIS-MI6 British agent, who had worked for Donald Trump’s opponents in the Democratic and Republican Parties. The report stated that Alfa Bank had been involved in the Russian network's influence on the 2016 U.S. presidential election. It also confirms that Alfa Bank and its representatives had collaborated with “the Kremlin interference campaign in U.S. elections”; and “Mr. Fridman and Mr. Aven informally provide financial and political advice to Vladimir Putin, especially on U.S. topics”. Alfa-Bank objected to this information in U.S. Court. BuzzFeed considered these claims an attempt of media harassment.
In April 2019 the U.S. Department of Justice published a redacted version of the Report on the Investigation into Russian Interference in the 2016 presidential election of Special Counsel Robert Mueller. The report states that co-owner of Alfa Banking Group and co-founder of the investment firm LetterOne Pyotr Aven testified that in late 2016 he had given promises to Russian President Vladimir Putin that he would establish channels of communication between Moscow and Donald Trump’s future administration. After Trump’s victory, Pyotr Aven gave Richard R. Burt, member of LetterOne’s Board of Directors, an assignment to find contacts in the transitional administration. This assignment was given shortly after Putin’s meeting with Russia's richest businessmen and tycoons in Kremlin and a few weeks later after Aven’s personal meeting with the Russian leader face-to-face.

These Reports Allege Trump Has Deep Ties To Russia.