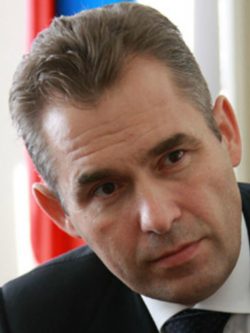 He was born on 8th September 1966 in Moscow.
In 1984 – he graduated from High School № 609 in Zelenograd.
In 1984-1986 - military service in the Soviet Border Troops of the KGB (Committee for State Security); was an activist of the All-Union Leninist Young Communist League – Komsomol.
In 1986-1987 – entered the Higher School of the Committee for State Security; School (Faculty) of Law (also known as School/Faculty of Foreign Intelligence).
In 1991 – he resigned from KGB at the rank of lieutenant. In the same year, due to formal liquidation of the Communist Party of the Soviet Union –KPSS, Astakhov’s membership in the political party ended.
In 1994 – entered the Moscow city Professional Chamber of Lawyers / Bar Association; created Pavel Astakhov Lawyers Board.
In 2007: - created and became a leader of the social-political movement For Putin!; - was elected as a co-chairman of the All-Russian Council of Initiative Groups of Support of Putin - For Putin!; -was elected in the Civic Chamber of the Russian Federation from the Diabetic Society of Disabled Persons of Bryansk region, entered the Commission on Communications, Information Policy and Freedom of Speech in Media and affiliated Working Group on Organization of Expert Assessment Activities. Also, created the Center of Legal Assistance to Journalists.
In 2008 – he was included in the Civic Council under the FSB (Federal Security Service).
In 2009 - he was reelected in the Civic Chamber of the Russian Federation.
In 2009 – he was appointed as the Children's Rights Commissioner for the President of the Russian Federation.
In 2016 - released from the position of the Children's Rights Commissioner for the President of the Russian Federation.
Education:
The Higher School of the Committee for State Security of the USSR; School (Faculty) of Law (1991).
School of Law, the University of Pittsburgh, LL.M. (graduate) degree (2002).
Family:
Astakhov’s great grandfather (paternal ancestor) was a Cossack ataman. His grandfather (maternal ancestor) was an officer of the Joint State Political Directorate – OGPU on the basis of the State Political Directorate – GPU of The People's Commissariat for Internal Affairs (NKVD) of the Russian SFSR; was close to and cooperated with Vyacheslav Rudolfovich Menzhinsky. His mother was a teacher; his father was a printing office employee.
Married, 3 children.

Legal occupation:
Among Astakhov’s clients, there are famous businessmen, show-business entrepreneurs, politicians. Mr. Astakhov became popular lawyer after a series of scandalous lawsuits. One of them was a case of Valentina Solovyeva, founder of the investment Ponzi-scheme Vlastelina, who was accused of the financial fraud of 17 thousand investors, which estimated total amount was 536.7 bln. roubles.
Mr. Astakhov, as a lawyer, also assisted to Yelena Baturina (the wife of the former Moscow mayor began legal action against Forbes magazine because of the article, which provoked a “wrong, misleading perception” of the audience about INTEKO company’s activities, particularly, the article stated that INTEKO had been supported by local state authorities); famous businessman Telman Ismailov (due to the investigation of the illegal actions and breaches of law at the Cherkizovsky Market, owned by the businessman), Mayor of Volgograd city Yevgeny Ishchenko (was engaged in the crime case of malpractice and abuse of authority, ammunition storage, illegal participation in business enterprises), etc.
According to some reports, in 2003 the famous lawyer expressed his willingness to defend Saddam Hussein in court in case of the International Criminal Tribunal. However, the latter one did not express the same desire.
Apart of his legal practice, Pavel Astakhov wrote books and was a TV-show presenter.
The lawyer holds different prizes and awards (the Order of Honour, the Commemorative Service Medal of the Investigative Committee of the Russian Federation, etc.), as well as anti-awards (Sexist of the Year).
After release from the position of the Children's Rights Commissioner for the President of the Russian Federation, Pavel Astakhov recommenced his professional legal activity as a lawyer.