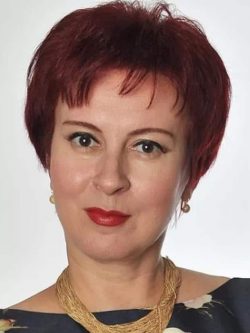 Aslamova Darya Mikhailovna (b. 1969) graduated from the Faculty of Journalism of Lomonosov Moscow State University. She worked as a military correspondent for the Komsomolskaya Pravda newspaper in "hot spots" (Abkhazia, Nagorno-Karabakh, Cambodia, Ossetia, Tajikistan, Yugoslavia, Rwanda, Chechnya, Mali, Syria). She was also a prisoner of war and described this period of biography in series of her reports. In 1999, she was a special correspondent for the odious tabloid newspaper AIDS-Info, which was popular in Russia in the 1990s. In 2003, she took an interview from Saddam Hussein.
Beginning in the 1990s, she wrote several books, mostly on "adventure-military-sexual" themes. She has a daughter Sophia from first marriage to businessman Andrey Svetov. Since 2005, she has been married to a Croatian journalist, Robert Valdec.

Propaganda of aggressive and invasive war of Russian Federation against Ukraine.

Aslamova is a typical “propaganda maker”, which is notably rude.

To start with, it’s mportant to notice that in her publications, Aslamova doesn’t shy away from obvious lies and unexplained accusations. As an example, in her comment about protests and intervention of ODKB military forces in Kazakhstan, she directly called NATO as a culprit of these events: “... guys, did we get a backlash from NATO just before the negotiations? They hit in the very underbelly, in Kazakhstan (we have 7600 km of border) and put a knife in the side of China.”

At most, Aslamova's professional approach is emphatically "tabloid" and "yellow", for her even the most obvious exaggeration and distortion of meaning are seemed to be normal. For example, when in September 2022, Aslamova’s husband, Robert Valdets, on the occasion of his “pro-Russian” position, had a fight in Croatia with unknown persons, as a result of which he received several mild (judging by the photo published by Aslamova) punches in his face, then this unremarkable story she presented in Russian media as "a terrible fascist attack for the purpose of intimidation."
According to the GuildHall media, Aslamova is on the black lists of a number of countries - in particular Ukraine and Turkey - as a Russian military intelligence agent, and together with her Croatian husband, she participated in the campaign of destabilization of Spain through the crisis in Catalonia, and also actively supports pro-Putin right-wing populist party Alternative for Germany (AfD).

It must be mentioned that Ukraine and Turkey are far from the only states that do not want to see this propagandist on their territory. In particular, in September 2017, Aslamova was not allowed to enter Moldova, where the “journalist” planned to interview Igor Dodon, who served as president of the country. In August 2022, Aslamova was detained at the border of Kosovo - the head of the Ministry of Internal Affairs of this country, Celal Shvetsla, accused her of "working for Russian intelligence under the guise of journalistic activities, saying that several countries proved Aslamova's involvement in the activities of Russian military intelligence, as well as her participation in military operations in Ukraine and propaganda of the Russian occupation”. “Her attempt to infiltrate our country, in addition to coinciding with the development of events in the north of the country, clearly testifies to the Russian trace and propaganda aimed at destabilizing our country, which Serbia has already joined.” After interrogation, Aslamova was released and went to Serbia.

Indirect confirmation of Aslamova’s successful cooperation with Russian government agencies (considering her “military” profile, we are really talking about the security forces) are quite high state awards: in 2014, Aslamova publicly demonstrated the medal of the Order of Merit for the Fatherland, 1st class, and the medal “For the return of the Crimea”.
Aslamova has really actively participated in the hybrid war against Ukraine since at least 2014 – in particular, it was then that she made the film “Donbass also wants to go home. To Russia! ". Subsequently, she was in the occupied territories many times, met with the leaders of “LPR” and “DPR” separatist groups. After the start of a full-scale occupation, together with Russian troops, she participated in the invasion, including being present in Mariupol, which she openly wrote about in her Telegram channel.

From January to June 2022, Daria Aslamova, as a “military correspondent” of the notorious “Tsargrad” TV channel, prepared a large amount of propaganda materials glorifying Russian aggression and inciting hatred of Ukraine among the audience - here are some examples of them:

• “THE SWASTIKA IS CUTTED ON THE CHEST: TERRIBLE DETAILS OF MASSACTIONS OVER PRISONERS AND PEACEFUL PEOPLE. Ukrainian patriots, who so zealously aspired to the EU and proudly called themselves enlightened Europeans, showed their true essence. Numerous outcast mercenaries from all over the planet joined them. Tsargrad military correspondent Daria Aslamova spoke in unpleasant details about how they behave and what the thugs who have occupied Ukraine are doing. She visited the front line as part of the Chechen division of the Russian Guard and knows for sure: the Russian army is fighting demons, hellish fiends.

“The Drama Theater is destroyed” Darya Aslamova, military commander of Tsargrad, reports from the center of Mariupol. The city has been smashed to pieces. After all, the Ukronazis promised to turn Mariupol into Stalingrad, and they are doing it without sparing anyone.”

“... A terrible battle for Donbass lies ahead,” Oleg says. And then it is important not to stop. The military is ready to go only forward. To Kyiv! The fascist creatures must be crushed and forgotten. You can't negotiate with them."

• "THEY’ RE CRUISING AROUND AND BOMBING": NAZIS SHOOT PEOPLE. INTERVIEW WITH THOSE, WHO ESCAPED HELL”. Vicinities of Mariupol. The Russian army is clearing its left bank from the national battalion "Azov" (banned organisation in the Russian Federation) ... Vladimir, together with his family, has just escaped from the area where the beasts are operating. They are surrounded and that’s why they become even more bloodthirsty.

• “Azov fighters” (*an organization banned in the Russian Federation) - to the pit, Zelensky - to prison” - this is the opinion of an ordinary woman from Mariupol. The brave Sasha, military correspondent of Tsargrad, Darya Aslamova, says that Russia is doing everything right. Ukraine has long demanded a general cleaning and diplomacy would not have helped here. “Ukrainian authorities are crazy,” Sasha puts an end to it. And finally, she asks me to tell the President of Russia that they will tolerate life in basements. Donbass lived under shelling for 8 years. Russia has come, so everything will work out - people believe.

So, it is obvious that the openly misanthropic propaganda activities of Darya Aslamova directly break both international law (in particular, Article 20 of the International Covenant on Civil and Political Rights of 1966), and, at a minimum, the criminal law of the Russian Federation (Article 354 of the Criminal Code of the Russian Federation) and Ukraine (Article 436 of the Criminal Code of Ukraine), and must receive a proper official legal assessment, with the ensuing consequences for this person.