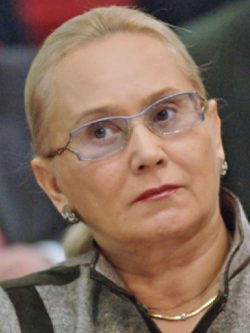 ANODINA, Tatyana Grigoryevna (b. 1939 in Leningrad) graduated from the Lviv Polytechnic Institute with a degree in design engineering in 1961. She worked as a test engineer, and later as a director at the Civil Aviation Research Institute. Her career went uphill in the mid-1960s after marriage to Colonel General Pyotr Pleshakov, Deputy Minister, and later Minister of Radio Industry of the USSR. In the 1970s, Anodina became the head of the technical department of the Ministry of Civil Aviation.

After the death of her husband in 1987, Yevgeny Primakov took patronage of Anodina. In 1991, Tatyana Anodina initiated the creation of the Interstate Aviation Committee (IAC) under the Interstate Council for Aviation and Airspace Use of the CIS and became its chairman. Since then, she has invariably led this interstate body, and her position has been equated to that of a minister.

She holds a Ph.D. in technical sciences and has the rank of aviation general and academician of the International Academy of Sciences. Her adoptive son, Alexander Pleshakov, and his wife, Anodina’s daughter-in-law, Olga Pleshakova, were founders and directors of Transaero, the once-largest Russian airline after Aeroflot. According to Forbes, after the collapse of the airline in 2015, Anodina, her son and daughter-in-law left Russia and settled in France, and the IAC headquarters moved to Baku.

The example of Tatyana Anodina demonstrates the fragility and unreliability of the system of nepotism and extra-institutional relations in Russian big business and politics. As soon as the main patron of the Anodina-Pleshakovs business, Yevgeny Primakov, died in 2015, the company was no longer able to maintain a multibillion-dollar debt and went bankrupt. Throughout all the time since 1991, no one in the country's leadership has found the will to point out an obvious corruption conflict of interest. Anodina led the body, which coordinated the civil aviation industry and the use of airspace of the CIS countries, and at the same time was a co-owner and relative of the founders of the second-largest airline in Russia. It is noteworthy that at the end of 2015, the powers of the IAC in Russia were suspended.

The Transaero, which had just been created at the end of 1991 and had no aircraft at that time, got a flight route to Israel, an extremely profitable destination for those times. The company was chosen as a carrier at a tender after long negotiations between the Ministry of Foreign Affairs, the Ministry of Transport, and other civilian and law enforcement agencies. In 1994, Transaero became the only private airline that the government exempted from paying customs duties and taxes on the import of aircraft, equipment, and spare parts for five years. The benefit continued after 1999, despite the company's unfulfilled obligations to purchase Russian Tu-204 aircraft. By the mid-2000s, Pleshakov became the largest shareholder of Transaero, his wife Olga became the general director, and Pleshakov’s mother and the head of IAC Anodina became a member of the board and owner of a 3% stake. All in all, the family owned a 53% stake in Transaero.

Using the highest patronage, the company received more and more new flight destinations and actively underbid the cost of tickets, which put it in debt. It should be noted that in such a situation, the 2014 crisis, provoked by the Kremlin’s external aggression against Ukraine and the subsequent devaluation of the ruble and a decline in the tourist activity of Russians, hit Transaero especially strongly. The total debts of Transaero by the time the company was shut down amounted to almost 250 billion rubles. The Anodins-Pleshakovs went bankrupt but did not become poor. According to the airline’s main creditor, VTB, they still enjoy a beautiful life, staying either in the USA, then on the Cote d'Azur, or in Azerbaijan.

As the Central Bank discovered, from September to December 2016, Alexander Pleshakov transferred shares from his account to his mother's one under donation agreements. In total, Anodina received 41.4% of the securities. In order not to attract attention, the shares were transferred in small blocks, up to 5%. Anodina, having received the shares, then sold them on the stock exchange. And although Transaero had been deprived of its license already for a year, its shares sometimes soared up that fall. As soon as the entire package was sold from Anodina’s account, Transaero ceased to distribute information about the restoration of the airline’s work. According to the Central Bank, due to these transactions, more than 2,000 investors who bought Transaero securities lost over 200 million rubles.

The consequences of the bankruptcy of Transaero shook the entire air transportation market in Russia. Aeroflot was able to continue to monopolize it; banks no longer agree to restructure the bad debts of other airlines, which continue to accumulate losses. Accordingly, companies have become unable to renew their fleets, and the most experienced pilots are increasingly leaving the Russian jobs marked for Middle Eastern and East Asian airlines with stable prospects and high salaries. Ultimately, Russian passengers and taxpayers suffer: the cost of tickets of Russian airlines is increasing, and flight safety is degrading. The degradation of the existing system in Russia exposes its deadly vices: nepotism and no free competition.