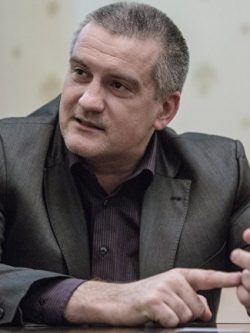 AKSYONOV, Sergey Valeryevich (b. 1972) studied as a political instructor at the Simferopol Higher Military-Political Construction School from 1989 to 1993. In 1993-1998, Aksyonov was deputy director of the Hellas cooperative, engaged in retail. From October 1998 to March 2001, he was Deputy Director of Asterix LLC, then the Deputy Director of Eskada Firm LLC. According to media reports, in the 1990s, Aksyonov was a member of the Salem organized crime group, nicknamed Aksen or Goblin, and was involved in a series of contract killings and extortion. The Salem gang has been charged with about 50 murders.

In 2008, Aksenov became a member of the organization “Russian Community of Crimea” and a member of the public organization Civil Asset of Crimea. The next year, he entered the board of the Civil Asset of Crimea, became the co-chairman of the Coordinating Council of the movement “For Russian Unity in Crimea!” and chairman of the all-Ukrainian party Russian Unity. In 2010, he was elected to the Supreme Council of the Autonomous Republic of Crimea in the multi-member district from Russian Unity, which gained 4% of the vote in elections to the Supreme Council of Crimea.

On February 27, 2014, the Supreme Council of Crimea, under pressure from Russian special forces, which seized control of the administrative buildings, appointed Sergei Aksenov as head of the council of ministers. On March 1, 2014, the acting President of Ukraine Olexander Turchinov declared the appointment illegal, noting that it was made in violation of the Constitution of Ukraine, the Constitution of the Autonomous Republic of Crimea, and the laws of Ukraine. On the same day, Aksyonov issued an order to reassign all the armed structures of Crimea to himself. From that day, he assumed the powers of the Supreme Commander-in-Chief of the Armed Forces of the Autonomous Republic of Crimea and Sevastopol.

On March 17, 2014, Aksyonov was included in the sanctions list of the United States and the European Union. In Ukraine, criminal proceedings were instituted against Aksyonov under Article 109 of the Criminal Code of Ukraine (forcibly changing or overthrowing the constitutional order or seizing state power). On April 13, 2016, the Pechersky District Court of Kyiv authorized the detention of Sergei Aksyonov on suspicion of committing a crime under Part 5 of Art. 191 (misappropriation, embezzlement of property or possession by abuse of official position) of the Criminal Code of Ukraine.

Participation in the illegal annexation of Crimea by the Russian Federation, the leadership of the occupation administration of Crimea, ties to organized crime, corruption.

Sergey Aksyonov’s career grew from a gang member through the status of an “authoritative businessman” and head of the marginal Ukrainian pro-Kremlin party to the head of the collaborationist administration of Crimea and a member of the ruling United Russia party. As the “head of the Crimea,” Aksyonov organized a corruption clan consisting of his relatives and friends, members of criminal gangs. His past deeds and involvement in the criminal world of Crimea made him a vulnerable figure for those who had plans to use outlaws to establish political power on the peninsula. Indirect evidence of his cooperation with Russian special services since at least the mid-2000s is his rapid progress as a leader of the radical pro-Kremlin movement on the peninsula after the Kremlin began to develop plans for its annexation.

The participation of the future politician in criminal structures was first publicly announced by the deputy head of the Supreme Council of Crimea, Mikhail Bakharev, in 2009. He accused Aksyonov of the raider's capture of two sanatoriums, several residential buildings, and a train station in Simferopol. According to media reports, Aksyonov started illegal activities in the Greki organized crime group in the early 1990s, where he was at first a simple militant, then, after the defeat of the gang, he joined the Salem group. He was the general director of several firms, shops, restaurants, and bars which he supervised on behalf of a criminal group.

In 2015, the former president of Crimea, Yuri Meshkov, published documents of the Crimean police confirming Aksyonov’s membership in the Salem gang and involvement in several contract killings. One report, dating back to 1996, spoke about an attempt on the current head of Crimea. The car in which Aksyonov and other Salem fighters rode was fired upon by members of the Greki. After the incident, according to the information, Aksyonov was in the Republican hospital Semashko with gunshot wounds. The documents laid out by the ex-president of Crimea also indicated that the current head of Crimea in the 1990s was associated with the organization of contract killings. So, for example, one of the operational reports says that Aksenov could be involved in the murder of the head of the Crimean heating system Kuzin, and in 1996, he was looking for people who were ready to kill the mafia boss Vasya Krasnogvardeisky.

On February 27, 2014, the building of the Supreme Council of Crimea was seized by a detachment of Russian special forces without identification marks. The officers of the Ministry of Internal Affairs of Ukraine guarding the building were dispersed, and the flag of the Russian Federation was hoisted on the building. The captors allowed a group of deputies inside, having previously taken away their mobile phones. Deputies voted to appoint Aksyonov as the prime minister of the new government and decided to hold a referendum on the status of Crimea. According to the official statement of the Council press service, 53 deputies voted for this decision, however, according to reports from some deputies, at the time of the vote, less than 40 deputies were present in the Supreme Council with a quorum of 51 people, and among the “voters” were the names of the deputies who did not vote or were absent. Based on this, the event can be qualified as an illegitimate and armed seizure of power.

Aksyonov claimed responsibility for organizing the secession of the peninsula from Ukraine in violation of the Constitution of Ukraine. Even before the so-called status referendum, on March 1, 2014, Aksyonov issued an order to reassign all the armed structures of Crimea to himself, the next day he announced the creation of the Crimean Navy, and on March 11, he announced the nationalization of the Ukrainian fleet in Sevastopol. A member of the regional parliament from a marginal party, which received 4% in the election, could not carry out without the financial and armed support of the Russian Federation. In late March, Der Spiegel wrote about Sergei Aksyonov: “He is an ideal puppet, because of his past, he is vulnerable to blackmail.”

Having gained power and becoming a member of the United Russia party, Aksyonov started to enrich his closest relatives and associates. His father, Valery Aksyonov, became deputy chairman of the construction committee of the State Council of the Republic. The wife of the head of the occupation administration, Elena, gained control of a dozen real estate and trade firms; she owns premium cars, two land plots, one house, two apartments, and six non-residential premises. Aksyonov’s sister-in-law, Evgenia Dobrynya, became the chairman of the property rights committee. It is this department that determines to whom and for how much to sell or rent state property. Her husband became the head of the Department of Fisheries of the Republican Ministry of Agriculture. Numerous associates of Sergei Aksyonov in the Russian Unity party also received official positions in the leadership of the region. Three former members of the same party — Mikhail Sheremet, Andrei Kosenko, and Dmitry Polonsky — became deputy prime ministers of the republic’s government. In 2016, Kozenko and Sheremet became members of the State Duma.