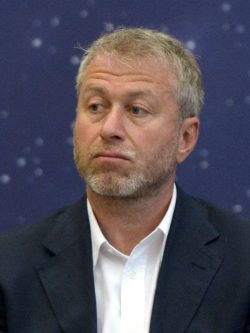 ABRAMOVICH, Roman Arkadievich (b. 1966) began his career after military service in 1987 as the mechanic of the construction department No. 122 of the Mosspetsmontazh trust. From January 1989 to May 1991, together with Eugene Shvidler, he founded the Uyut cooperative, which was engaged in the production of toys from polymers. In 1991-1993, he was the director of the small enterprise AVK, engaged in commercial and intermediary activities, including the resale of petroleum products. In 1992, he was accused by the Moscow city prosecutor of theft of state property and detained. At the end of the year, the case was dismissed due to the lack of corpus delicti.

Since 1993, Roman Abramovich concentrated his business on oil trade at Noyabrskneftegaz. Around the same time, he met businessman Boris Berezovsky and together they created the offshore company Runicom Ltd, registered in Gibraltar, and several subsidiaries in Western Europe. Abramovich himself headed the Moscow office of the Swiss company Runicom S.A. and Sibneft. In September 1996, he was elected to the board of Sibneft. The president of the company was Eugene Shvidler. In 1998, the media first mentioned Abramovich's name. Until that time, he managed to remain in the shadows so successfully that the public had not even known what he looked like. Everything changed when the press became aware that Roman Arkadievich is a confidant of President Yeltsin, who also sponsors his daughter and son-in-law and finances the politician’s election campaign in 1996. In December 1999, Abramovich became the owner of a fortune of $1.4 billion.

At the end of 1999, Abramovich became a public politician: he was elected as a member of the State Duma of the 3rd convocation. In December 2000, he left the Duma due to his election as governor of the Chukotka Autonomous Region. From January 17, 2001, to July 3, 2008, Abramovich served as governor of the Chukotka Autonomous Okrug, after which, from October 22, 2008, to July 2, 2013, he was chairman of the Duma of the Okrug.

In the late 1990s and early 2000s relations of the former partners, Abramovich and Berezovsky, sharply worsened. Disagreements were both financial and political in nature. Assumingly, the 1998 merger of Sibneft and Yukos was the first call, and the breakup occurred a little later in 2000, when Berezovsky opposed Vladimir Putin, who became president, and lost this fight. Abramovich, however, never opposed the authorities. In the early 2000s, the businessman created the Russian Aluminum company together with Oleg Deripaska. Roman also bought back the shares of ORT, owned by Berezovsky. He also bought out a controlling stake in Aeroflot. In 2005, Abramovich sold Sibneft to state-owned Gazprom for $13 billion. Until recently, Abramovich controlled 24% of Channel One (sold to VTB on March 7, 2019), 38.9% of the Federal Property Management Agency, 25% of Rastrkom-2002 LLC, 31% of Evraz. Roman Abramovich also owns the Rost registrar and the White Gardens business center.

In the West, Abramovich was famous for the extravagant purchase of the Chelsea football club, which cost the billionaire £140 million in the summer of 2003. By then, he had already settled in London, despite a governorship at the other end of the world. He paid the debts of the club, staffed it with expensive football players, and eventually achieved the revival of the team. On May 10, 2012, Chelsea, for the first time in their history, won the UEFA Champions League.

According to experts, a collection of Abramovich's art objects costs at least $1 billion. The billionaire also owns one of the largest private yachts, Eclipse, the cost of which at the time of purchase in 2010 amounted to $400 million and a Boeing 767. In 2018, Abramovich’s fortune was estimated at $12.4 billion, and he ranks tenth among the richest Russians. On May 28, 2018, Abramovich received an Israeli passport in Tel Aviv, becoming, according to media reports, the richest citizen of Israel.

Using his financial influence in the interests of the Putin regime.

Abramovich was one of the first who recommended Yeltsin to choose Putin as his successor and has demonstrated loyalty to Putin throughout the twenty years. According to the testimony of the late oligarch Boris Berezovsky, given in a London court, Abramovich has enjoyed significant political influence in the Kremlin since the second half of the 1990s. In October 1999, he attended Putin's birthday party. Soon after, Abramovich allegedly bought Putin, then the prime minister, a yacht for $50 million. By the time Putin became president in 2000, Abramovich was playing a key role in forming the new government, Berezovsky added in his testimony. Abramovich could even choose ministers, according to Berezovsky. He could open or close criminal cases, as well as institute investigations and arrests. Abramovich’s sale of Sibneft to the state-controlled Gazprom for $13 billion allowed the government to consolidate most of the oil and gas industry.

In April 2018, shortly after the Kremlin’s agents attempted to kill Sergey Skripal, Roman Abramovich was put on the list of Russian oligarchs against whom British intelligence would take action under its campaign to combat the influence of the Putin regime. The purpose of the sanctions is to “limit the ability of oligarchs to move freely and manage their business empires.” So, the authorities of the United Kingdom refused to renew his investor visa, and also announced their intention to investigate the origin of his assets registered in the country and the legality of the acquisition of real estate. According to the British authorities, Abramovich and other Russian oligarchs play the role of state emissaries of the Putin system in the West, serve as backup “wallets” of the Kremlin, and may also be involved in the Kremlin’s attempts to interfere in domestic political processes in the West in the interests of the kleptocratic regime. According to the British Parliament’s report on “dirty money” from Russia, using London as a “base for corrupt assets of Kremlin-related individuals” has implications for UK national security and “weakens our alliances and undermines faith in our institutions” through money laundering.

Recently, due to his problems in the UK and getting into the US Kremlin report, Roman Abramovich began to change the structure of his assets to avoid new waves of US sanctions. So, he reduced his participation in the Cyprus offshore Crispian Investments Limited, which owns the shares of Norilsk Nickel, to a package of 49.95% of the shares. Earlier, the billionaire and his business partners reshaped the shareholding structure of Evraz, a metallurgical and mining holding with assets in the Russian Federation, the USA, Canada, the Czech Republic, Italy, Kazakhstan and with headquarters in London. Until now, Abramovich, unlike his other fellow oligarchs, has managed to evade Western sanctions, and he even managed to bypass the refusal to extend a British visa by accepting Israeli citizenship. Nevertheless, the promised legal checks of the earned fortune can tell a lot of interesting things about the nuances of relations between the authorities and big business under Putin, and Western pressure can complicate the possibility of the Kremlin using its “wallets.”

Is Abramovich at last paying the price for being too close to Putin?