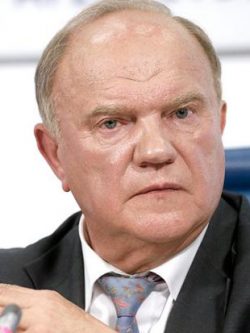 Chairman of the Communist Party of the Russian Federation, Member of the State Duma of Russia (1993 - to date)

ZYUGANOV, Gennady Andreyevich (b. 1944) has been in the communist movement since 1957. In the 1960s, he served in the Soviet army and was a teacher at a school and a pedagogical institute in the Oryol region. From 1970 - 1978, he was a member of the Oryol city and regional councils. In 1974 - 1978, he was Secretary of the Oryol City Committee of the Communist Party (CPSU), and later became the Head of the Propaganda Department of the Oryol Regional Party Committee. In 1983, he joined the Central Committee of the CPSU. Between 1989 and 1990, he was Deputy Head of the Ideological Department of the CPSU Central Committee.

Complicity in the establishment of a regime of personalist dictatorship, violation of human and civil rights, imitation of opposition activities, justification of war crimes, promoting Stalinism.

Gennady Zyuganov and his Communist Party of the Russian Federation are the most important elements of the system of “managed democracy,” created back in the 1990s and finally formed already in the 2000s under Vladimir Putin. In this system, simulacra parties act and imitate opposition activities within the framework of the Kremlin’s narrative instead of real political parties expressing the interests of voters and competing for power. The task of Zyuganov and the Communist Party is to imitate opposition activities on the left-patriotic flank, which they have been successfully dealing with for many years.

Officially, the Communist Party is the main opposition party in Russia. The Communist Party criticized Yeltsin when he was president (and even attempted to impeach him), and when Putin came to power, it also criticized him. This toothless criticism continues to this day. However, the Communist Party as a whole and personally Zyuganov always avoided a tough, irreconcilable conflict with the authorities when it directly threatened their political existence.

On June 16, 1996, the presidential election took place. As a result of the vote, the leader of the Communist Party got 32.03% of the voters, while the then acting President Boris Yeltsin got 35%. In the second round of the election, Zyuganov scored significantly less than his rival, about 40% of the vote. Thus, Boris Yeltsin became president of Russia. Although the loser candidate challenged the results of the voting in some regions, many politicians and experts are sure that Zyuganov was the real winner in the election race, who knew this very well but preferred to trade the victory. As it turned out, this view is shared by former President Dmitry Medvedev. On February 20, 2012, he met with the “non-systemic opposition,” at which, according to the testimonies of Sergei Udaltsov, Sergei Baburin and other participants in the event, the ex-president spoke about the 1996 election as follows: “It is unlikely that anyone has any doubts about who won the election of 1996. It was not Boris Nikolaevich Yeltsin.”

An analysis of the economic and socio-political situation in Russia, as well as other conditions that could contribute to the real victory of Mr. Zyuganov, shows that:
- the reforms carried out by the Yeltsin government can hardly be called successful and led to a popular disappointment;
- between the first and second round, the main rival of the Communist Party, Boris Yeltsin had a heart attack;
- according to some sources, the best analysts from the state security sympathized with the Communists and offered their services for action in the situation.

According to the testimony of Zyuganov’s colleagues, it was his conscious decision not to use the opportunities: “Even before the first round, the campaign was artificially curtailed. Kuptsov, for example, forbade me to organize a press center, where about 500 journalists had already submitted applications. He said that it’s better to create a press center in the State Duma, but they didn’t do it nevertheless,” said Podberezkin, a former member of the Communist Party of the Russian Federation.

Two versions explain this behavior. According to the first one, it is believed that the leader of the Communist Party did so under strong pressure from the Kremlin out of fear that his victory would lead to the ban of the party. The second one, the most common, shared by most of the experts and even associates of Mr. Zyuganov. The reason for this decision was the politician’s unpreparedness for responsibility, as well as the desire to preserve the preferences and benefits that the new political system provided for the party (including Mr. Zyuganov personally). In particular, it was about the generous “donations” from representatives of the big business elite and heads of large state corporations and opportunities for lobbyism.

According to the materials posted on the website of Kompromat.ru, one of the sources of income for the Communist Party was the sale of mandates. The cost of one mandate of a member of the State Duma reached $2 million. Besides, the money came through the collection of “black tribute” from businessmen. The leader of the Communist Party took advantage of the fears of the young business elite regarding the possibility of the Communists returning to power. Thus, paying impressive amounts to the Communist Party, business magnates bought themselves “insurance” for the future and won the sympathies of potential Kremlin owners in advance. As indicated in some articles referring to a confidential source in the Kremlin, even the heads of some federal ministries and state corporations practiced this: “As they say, the Ministry of Railways, Gazprom, RAO UES under Anatoly Dyakov paid tribute to the Reds...”

Thus, the federal politician chose to opt for a stable position, guaranteeing wide career and financial opportunities, in the complete absence of any political responsibility. The opposition activities of the leader of the Communist Party of the Russian Federation began to bear an imitative character and was intended, mainly, to capture the left-wing part of the electorate to neutralize it. Experts say that this was the immediate task of the Communist Party, defined as a result of unofficial agreements between its leader and the Kremlin. Mr. Zyuganov used the position of the leader of the Communist Party to strengthen his status, get government posts, and enrich himself.

An analysis of the party policy in subsequent years shows that the actions of the leader of the Communist Party were in line with the officially proclaimed political course. In most cases, his statements did not go beyond the limits of acceptable criticism of the authorities and rather supported their decisions than challenged them. While any real opposition was being methodically destroyed, the Communist Party maintained certain stability, mobilizing its electorate to support the government initiatives from time to time.

In 2012, supporting anti-Americanism, the leader of the Communist Party published an infamous blog entry in which he contemptuously spoke about the tragic death of the American ambassador in Libya. In particular, he wrote that “the American ambassador was shot as the filthy dog,” that he is the mastermind of the Libyan revolution and deserved such a death.

In 2014, after the Russian military invasion of Ukraine, Mr. Zyuganov strongly supported the criminal foreign policy of the Russian president. In particular, in his speeches he openly advocated for:
• the accession of Crimea to the Russian Federation;
• legal recognition of pro-Kremlin referenda;
• granting official status to the Russian language;
• federalization of Ukraine.

The Main Investigation Department of the Ministry of Internal Affairs of Ukraine launched criminal proceedings against Gennady Zyuganov on suspicion of “financing actions against the sovereignty of Ukraine, changing its political system or borders on a particularly large scale by a group of individuals”.

In 2015, Zyuganov publicly approved the actions of the Russian president in Syria. He called the rule of Assad, who had been in power for the past 30 years and accused of mass killings of civilians and other war crimes by the international community, legal, and urged Putin to provide all kinds of support to Syria, including weapons. In the same year, Mr. Zyuganov was awarded the medal “To a participant in the military operation in Syria.”

General public and experts have repeatedly noted the commitment of Zyuganov to the ideology of Stalinism. Mr. Zyuganov does not deny this and considers it appropriate to use Leninist dialectics and Stalinist practice to achieve the party's goals.

Russian Elections: An Oxymoron of Democracy

Where Communists See an Opening, Many Russians See a Closed Door

US ambassador to Libya was shot like a dog’ – Zyuganov