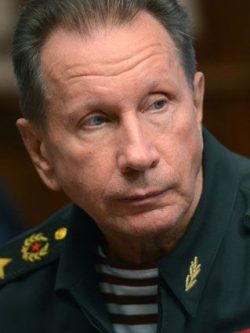 Viktor Zolotov was one of the closest people to Vladimir Putin for many years, the one responsible for his personal safety. He is considered one of the “hardliners” inside the Kremlin, those who advocate for the suppression of political opposition and for a more radical anti-Western policy. Currently, he is the head of a significant military organization of Putin’s regime: the National Guard, which is directly subordinate to President Putin. The newly established body (2016), according to a number of analysts and observers, serves as Putin’s personal army and aims to counter the “internal enemy,” i.e. any attempts of an elite coup or civil unrest and disobedience. Russia’s Defense Minister Sergei Shoygu himself stated that “the newly established National Guard... can be used without intermediaries, such as a defense minister, and bypassing the constitutional procedure on the use of the Armed Forces.” The National Guard has powers to fire into unarmed crowds if a government building comes under attack. According to the law, the National Guard can also be used abroad. In addition, the agency has also a special cyber intelligence unit that monitors and analyses social media.

The National Guard became notorious for its participation in the dispersal of peaceful protests, detainment and beating of opposition members and civil activists. Viktor Zolotov himself publicly threatened one on Russia’s opposition leaders, Alexei Navalny, in response to an investigation about corruption inside the agency. Navalny, in return, deemed Zolotov one of the officials responsible for the assassination of Boris Nemtsov and concealment of the crime. Most recently, the National Guard was involved in the violent suppression of protests against the non-admission of opposition candidates in elections to the Moscow City Duma. It can confidently be stated that the National Guard led by Zolotov is one of the main pillars of authoritarianism in Russia. The United States and Canada imposed sanctions against Zolotov in 2018 and 2019, respectively.