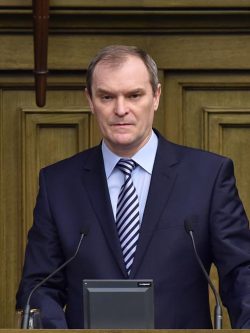 ZAMASHNYUK, Alexander Nikolayevich is a judge who made deliberately unlawful decisions against the participants of the opposition. From May 14, 2010, to June 18, 2014, he was the judge of the Moscow City Court. After the verdicts against Udaltsov and Razvozzhayev, he was appointed a Justice of the Supreme Court of the Russian Federation in 2014.

In 2014, Zamashnyuk twice extended the house arrest to Sergei Udaltsov. Udaltsov was accused of organizing “mass riots” on Bolotnaya Square in May 2012. Zamashnyuk also extended the arrest of Leonid Razvozhaev in a pre-trial detention center, who was charged with similar charges. In the same 2014, on July 24, Zamashnyuk sentenced each of these protesters to 4.5 years in prison. Besides, Leonid Razvozhaev was fined for 50,000 rubles for illegal border crossing, even though there were the Russian security officers who forcibly abducted Razvozzhaev on the territory of Ukraine and illegally took him to Russia.

As a Justice of the Supreme Court of the Russian Federation, he ruled to prolong the detainment of Anton Izokaitis, who was accused of promoting terrorism, extremism, violence, and discrimination. His crime was based on swearing while being drunk in the police department. The Memorial human rights center recognized Anton Izokaitis as a political prisoner.

On July 16, 2015, Zamashnyuk upheld the sentence (7 years in a strict regime penal colony) to Alexei Chirniy, a Ukrainian activist from Crimea. His detention and testimony allegedly given under torture started a case against Oleg Sentsov and Alexander Kolchenko.

On July 23, 2015, Zamashnyuk upheld the verdict for publicist Boris Stomakhin, accused of calls for terrorism and extremism and sentenced him for his texts to 7 years of strict regime penal colony.