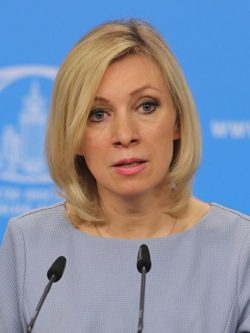 ZAKHAROVA, Maria Vladimirovna (b. 1975 in Moscow) spent most of her childhood in Beijing, where her father worked as a diplomat. In 1998 she graduated from the Faculty of International Journalism at Moscow State Institute of International Relations (MGIMO). From 2005 to 2008, he was the head of the Press Service of the Permanent Mission of Russia to the United Nations in New York. She became known to the general public, working as Deputy Head of the Information and Press Department of the Russian Ministry of Foreign Affairs (2011-2015). She organized briefings by the official representative of the Russian Foreign Ministry and accompanied the head of the Ministry of Foreign Affairs, Sergey Lavrov, during foreign visits. She was responsible for the popularization of the Ministry on social media.

Since 2015, she has been the official representative of the Russian Ministry of Foreign Affairs, the Director of the Information and Press Department. In her current position, Maria Zakharova holds weekly briefings for the media, where she comments on current news both in world politics and the Russian domestic issues, while expressing both the official opinion of the Foreign Ministry and her personal one. She regularly accuses the entire international community of Russophobic sentiments, which are to be resisted. On January 26, 2017, Maria Zakharova received the first order in her career, the Order of Friendship, presented by Vladimir Putin.

Maria Zakharova is the public mouthpiece of the Kremlin’s foreign policy. She invariably supports the foreign policy aggression of the Putin regime, the policy of self-isolation of Russia, justifies domestic political repressions and the confrontation of Russia with the West. She supported the annexation of Crimea and denied the presence of Russian troops in the Donbas.

Maria Zakharova accused Ukraine of provocation in the Black Sea during the incident in the Kerch Strait (November 25, 2018), when the ships of the Coast Guard of the Border Service of the FSB of Russia captured the Ukrainian Navy ships and 24 Ukrainian sailors who were kept as prisoners of war until exchanged for captured pro-Kremlin fighters in Ukraine in September 2019. The world community condemned the actions of Russia and demanded to restore freedom of navigation in the international waters of the Kerch Strait.

Maria Zakharova often uses aggressive and offensive rhetoric in her articles and comments on social media, at press conferences, and public meetings. She intentionally distorts facts and uses unjustified harsh statements against the opponents of the Putin regime.

Meet The Woman Who Is Proudly Russia’s Troll-In-Chief

Russian Government Spokeswoman Suggests Trump Won Thanks To ‘The Jews