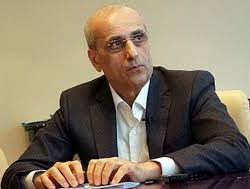 YUSUFOV, Igor Khanukovich (b. 1956) was born in a nomenklatura family — his father was the chairman of the Council of Ministers of Soviet Dagestan. In 1979, he graduated from the Novocherkassk Polytechnic Institute with a degree in electrical engineering. At the institute, Yusufov was a secretary of the Komsomol Committee and a member of the Communist Party. After graduation, he began working as an engineer at Mosenergo. In 1984-1987, Yusufov worked in the USSR trade mission in Cuba. He was a senior expert on the construction of the Havana thermoelectric power station. In 1991, he graduated from the All-Union Academy of Foreign Trade.

In the early 1990s, Yusufov collaborated with the Renaissance Social Development Fund of Russia, whose leaders at different times were Boris Yeltsin, Chairman of the RSFSR Supreme Council, and Alexander Rutskoi, vice-president of the country. In 1991-1992, Yusufov served as deputy chairman of the Committee on the Protection of Economic Interests of the Russian Federation. In April 1993, Yusufov was appointed Deputy Minister of Foreign Economic Relations of the Russian Federation. In 1994, after the liquidation of the ministry, he became a manager at Rosvooruzhenie. In 1996-1997, Yusufov served as Deputy Minister of Industry of Russia, where he was responsible for the gold and diamond industry.

In 1998, Yusufov got the post of first deputy chairman of the State Committee of the Russian Federation for State Reserves (Rosrezerv) and later became acting chairman. In December 1998, he was appointed chairman of the committee, later transformed into the Russian Agency for State Reserves. The department was called one of the “key mechanisms for federal influence on the regions and the most important source of resources beyond the control of the Duma.” Using barter deals, it provided the regions with fuel during the winter and spring-sowing seasons.

In 2001, Yusufov was appointed Minister of Energy of the Russian Federation. As a minister, he was elected Chairman of the Boards of Rosneft and Transnefteprodukt (TNP). In 2003, he was elected to the Board of Gazprom. Yusufov left the Ministry of Energy in 2004 after the reform of the government. From July 2004 to April 2011, he served as Special Representative of the President for International Energy Cooperation and Ambassador on Special Assignments of the Russian Ministry of Foreign Affairs. Since 2011, Igor Yusufov has been carrying out private investment activities through the Energy Fund established by him.

His eldest son, Vitaliy, was the director of the Moscow branch of Nord Stream AG, the operator of the Nord Stream project, until 2009. After that, he acquired two bankrupt shipyards of the shipbuilding holding Wadan Yards (later renamed to Nordic Yards) from the authorities of Mecklenburg-Vorpommern in North-Eastern Germany. He sold them in 2016.

As follows from the data published by the State Duma’s anti-corruption commission, during Yusufov’s leadership, billions of rubles were stolen from the Rosrezerv. Agency management replenished the reserve base mainly on paper, distributing money to their cronies. They also organized a scheme of supply of enterprises, which, having borrowed tons of metals — nickel, bronze, cast iron, food products, grain, flour, and other reserves, went bankrupt shortly.

After the accident at the Sayano-Shushenskaya HPP on August 17, 2009, the Rostekhnadzor commission revealed reasons for what had happened and, in particular, announced the list of people whose actions contributed to the accident. Among them was Yusufov, who, when he was the head of the Ministry of Energy, “did not create... mechanisms for real state control and supervision of the safe operation of energy facilities.”

Yusufov is also associated with the redistribution of control over the Bank of Moscow after the dismissal of Yuri Luzhkov in 2010. The former co-owner of the Bank of Moscow, Pavel Borodin, residing in the UK, said that he was forced to sell a block of shares at a lower price by Igor Yusufov, who guaranteed the banker immunity from persecution and the opportunity to leave the country. Later, VTB State Bank, which became the final owner of the securities, paid $300 million more for them. In an interview, Borodin said that Yusufov demanded the sale of shares at a reduced cost in the interests of then-President Dmitry Medvedev.

Yusufov is involved and is the likely paymaster of the murder of the former owner of the Wadan Yards shipyards Andrei Burlakov in 2011 and the attempt on the life of his wife Anna Etkina. Andrei Burlakov, who was the deputy general director of the Financial Leasing Company (FLC) in 2008, organized a scheme with unsecured loans and bought a shipbuilding company for some of this money. FLC West Holding also bought shipyards in Germany and Ukraine from the Norwegian company Aker Yards. Based on these assets, worth almost 300 million euros, the businessmen created Wadan Yards, where Andrei Burlakov became the chairman of the board. However, when the shipyards went bankrupt as a result of the global crisis, and Igor Yusufov’s son Vitaliy bought them cheaply, he promised the German authorities to arrange the construction of icebreakers as soon as possible, pay loans, pay off debts of 376 million euros, and also save 1,200 jobs. But a year later, in 2010, Vitaly Yusufov pledged the shares of a shipbuilding company and with the money received acquired a 20% stake in the Bank of Moscow exactly before its merger with VTB. Burlakov asked to institute criminal proceedings against Vitaly Yusufov and tried to seize his assets, as well as to arrest his stake in the Bank of Moscow, but a month later he was shot by a killer in a restaurant in Moscow.

Father and son Yusufovs are associated with several other dubious schemes in the telecommunications, oil, banking, and shipbuilding businesses. The German Prosecutor’s Office suspects the Yusufovs of money laundering. Their invulnerability in Russia is associated primarily with their role as performers of dirty financial work in the interests of the ruling regime. Carrying out gray schemes in Rosrezerv and the Ministry of Energy, the Yusufovs filled the wallets of the higher officials, the capture of the Bank of Moscow eliminated a potentially politically dangerous competitor with a strong financial base, and the purchase of unprofitable shipyards in the Merkel constituency served to motivate the German authorities to conclude an agreement on the Nord Stream pipeline, in which Yusufovs also had an interest. To achieve these goals, the Russian authorities did not pay attention to murders, intimidation, and the withdrawal of capital abroad, which says a lot about the nature of this government. Cooperation with the Yusufovs is extremely toxic, and their names deserve to be included in the sanctions lists.