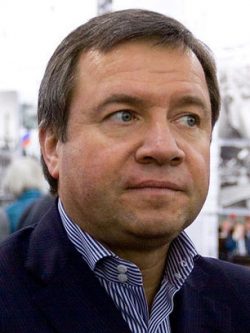 Counselor to the President of the Russian Federation

YUMASHEV, Valentin Borisovich (b. 1967) is one of the key figures in Putin's rise to power. Born in Perm, he graduated from the Moscow State University with a major in journalism in 1979. Since 1978 he was a correspondent for Moskovsky Komsomolets. In 1979-1987, he worked at Komsomolskaya Pravda and was a columnist for the Izvestia newspaper. In 1987 he began writing for the Ogonyok magazine. Later, he became the editor-in-chief of the magazine.

In the early 1990s, Yumashev became close to Yeltsin and his family. He edited Yeltsin’s memoirs “Confession on a given topic” and “Notes by the President”. He took part in Yeltsin’s 1996 presidential campaign. After the victory of Boris Yeltsin in the election, he was appointed his adviser on media relations. From March 1997 to December 1998, Yumashev served as head of the Presidential Administration (Presidential Executive Office), then became an adviser to President Yeltsin. In 2000, Valentin Yumashev became one of the founders of the Yeltsin Foundation. On June 22, 2018, President Putin made officially Yumashev his adviser. Later that day, President’s spokesman Peskov announced that Yumashev has been Putin’s adviser already for 18 years. Valentin Yumashev and his wife Tatyana Yumasheva (daughter of Boris Yeltsin) own half of the Imperia Tower in Moscow International Business Center and half of the CITY business center.

Involvement in the transfer of power to Putin, nepotism.

Yumashev successfully capitalized on his close relations to the family of the first president of Russia and became one of those who made Vladimir Putin a successor to Yeltsin.

The Presidential Administration (PA) began playing a decisive role in shaping Russian politics under Yumashev's predecessor, Anatoly Chubais. Yumashev continued such a practice. The Presidential Administration first made to serve as a “technical department” turned into the main center for government decision-making bypassing the Constitution. When Yumashev headed the PA in March 1997, Chubais took Alexey Kudrin, deputy head of the PA, to the government with him and asked him to find a replacement. Kudrin suggested his friend from Saint Petersburg, Vladimir Putin. Yumashev liked Putin and he lobbied for him to become the head of the FSB, and then the prime minister, whom Yeltsin directly called his successor as president. Curiously, all the successor candidates proposed by Yumashev turned out to be connected with the state security agencies. Besides Putin, Yumashev brought the people to the Kremlin who are still shaping the domestic politics of the Putin regime: Alexei Gromov, the current first deputy head of the PA responsible for media relations, and Alexander Voloshin, who, in turn, invited Vladislav Surkov and other key figures of the Putin era.

The former head of the presidential administration promoted Putin as Yeltsin’s successor in the same way that he had once helped Yeltsin himself — with the help of a biographical book written by a group of journalists under Yumashev’s patronage just before the election, which was distributed free of charge to Russian regions. “Still, I considered myself to some extent responsible for Putin, because I invited him to work, I promoted him, I introduced him to Boris Nikolaevich” Yumashev said in an interview with Meduza.

After Putin came to power, Yumashev left public politics, but became literally related to the Russian elite: in 2001, his daughter Polina got married to oligarch Oleg Deripaska, and in 2002 Yumashev himself married Tatyana Dyachenko (Yumasheva), daughter of Boris Yeltsin. Despite keeping a low profile, Yumashev remained a presidential adviser and continued to influence political issues. Supposedly, that was Yumashev who recommended Medvedev as a successor to Putin, and also oversaw Vladislav Surkov, the architect of Putin's “sovereign democracy”. Now, Valentin Yumashev, in his words, stands up to Putin for arrested influential people — friends of oligarchs who consider themselves obligated to Yumashev for their current status.

Putin and Yumashev: Survivors of the Nineties

Putin appoints Yeltsin’s old chief of staff to serve as an adviser, but the Kremlin says he’s been helping out for 18 years