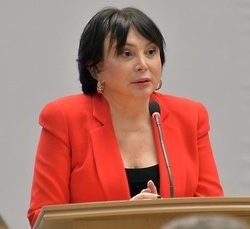 Head of the Human Rights Council of the Moscow Region

YUDENICH, Marina Andreyevna (b. 1959 in Ordzhonikidze) was born in a family of a Justice of the Supreme Court of the North Ossetian ASSR. Thrice failing the entrance exams at the All-Russian State Institute of Cinematography and Moscow State University, in 1977 she left for the Chita Region, where she worked for the Krasnoye Znamya regional newspaper. In 1981, she worked for several months as a court clerk in the Supreme Court of North Ossetia. In 1982, she married Igor Nekrasov, the son of the head of a department at the USSR State Planning Commission, settled in Moscow, worked in the Ministry of Radio Industry, and then the Ministry of Aviation Industry. In the late 1980s, she was secretary of the Sokolniki district Komsomol committee, while studying at the All-Union Correspondence Law Institute in absentia. In 1988-90, she created the Youth Commercial Center at the district Komsomol committee, which opened the first paid public restrooms in Moscow. She was a Member of the Communist party until its ban in August 1991.

From 1990 to 1992, she worked as an editor-in-chief of the youth channel of the Yunost radio station. In 1992-94, she was the head of the TV programs on the Ostankino channel, the host of the Nota Bene program. On July 21, 1994, she was appointed deputy chief for the preparation of television and radio programs of the Information Department of the Presidential Administration. In December 1994, on the air of the Nota Bene program, she explained the attack of the Presidential Security Service against Vladimir Gusinsky’s Media-Most group by the discovery of unregistered weapons and dubious identification cards. On January 24, 1995, she was appointed acting Head of the Press Service of the President of the Russian Federation. In April 1995, she left the post due to the reorganization of the department. From October 1996 to October 1997, she was the Chairman of the Board of CJSC ENCIES. In the late 1990s, she lived mainly in France.

Since 1998, Yudenich has been the author of detective novels. From 2008 to 2013, she was Creative Director of the pro-Kremlin portal Politonline.ru. In 2012, she became a confidant of Vladimir Putin in the presidential election. From fall 2013 to November 2016, she headed the Information Security Agency. Since 2014, she has been a Member of the Human Rights Council under the Governor of the Moscow Region. Since April 2017, Yudenich has been an op-ed writer on the RT channel's website. Since December 12, 2017, she has been the Chairman of the Council for the Development of Civil Society and Human Rights of the Moscow Region.

Adventurer from the 1990s, Marina Yudenich built many myths around her biography. Among them were her allegations of being the relative of the White Army general Yudenich; the stories about her studies at the Sorbonne and Moscow State University; claims that Roman Polanski was going to film her detective novels, etc. In the bottom line, we have a lively woman who has found her role in broadcasting pro-Kremlin propaganda and simulating civil society.

In 2007, she released the book Oil. In it, she broadcasted typical pro-Putin propaganda about the Western conspiracy against Russia and its “wise” president Putin. The main villain in the book was Mikhail Khodorkovsky. It is noteworthy that, according to the book, the first and most dangerous point in the “US plan for the collapse of Russia” is “the destruction of the structures of the former KGB.” Marina Yudenich also found a place for Putin’s political opponents in her book. According to its colorful description, the leaders of the opposition “have long and firmly hung on strong strings, like puppets in a very professional puppet theater, and move solely at the command of the puppet master.”

The puppeteer of Yudenich at that time was Konstantin Rykov, one of the first propagandists of Putin, who, together with the Kremlin media curators Kostin and Gorshenin, launched the Internet portal Pravda.ru. The holding, which included Politonline.ru of Yudenich, was engaged in political bullying and information attacks against opponents of the government and regional elites. In this position, she took part in the scandalous presidential election in 2012 as Putin's confidant.

Having demonstrated her consistent loyalty to the Putin regime, she switched to the civil service and now positions herself as a “political strategist.” The so-called “human rights councils” in Russia are organized by federal and local authorities and serve the purpose of simulating a dialogue between the authorities and civil society on the terms of the ruling group. However, Yudenich here became famous for her controversial statements. In 2014, in her LiveJournal, she published an offer to Ramzan Kadyrov to kill the opposition journalist Arkady Babchenko, who survived a planned assassination attempt in 2018. In 2015, she stated that the liberal opposition is “absolutely politically ill people, people who hate their country.” Every year, she organizes propaganda forums “Moscow Region. The ideology of leadership” in all municipalities of the Moscow region at the expense of the regional budget.

From time to time, Marina Yudenich manifests her real attitude to the people. In 2018, she called the protest of the residents of Volokolamsk against the poisonous incinerator the machinations of enemies and provocateurs. In January 2019, while discussing plans to restore the historical quarter of the city of Korolev with its residents, she claimed that locals don’t contribute enough to the budget: “You say so easily: And let's take this or that from the budget...But have you contributed anything to that budget to take anything from it?”

Marina Yudenich was a communist activist in the 1980s, a media killer in the 1990s, an author of pulp fiction detectives and a pro-Kremlin conspiracy theorist in the 2000s, and a boorish official under the late Putinism. All of this should have put an end to her career and reputation in the democratic state and society. Unfortunately, the weakness of civic consciousness and the repressive nature of the political regime allows such persons to prosper.