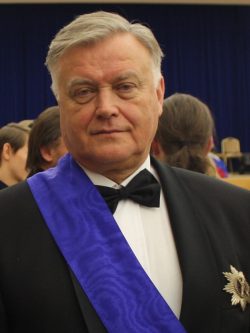 YAKUNIN, Vladimir Ivanovich (b. 1948) graduated from Voenmekh (Leningrad Mechanical Institute) in 1972 majoring in aircraft manufacturing. Later, Yakunin took part in the designing and maintenance of long-range ballistic missiles. In 2018, Yakunin confirmed in his book that he was an officer of the KGB, working in the scientific and technical department of its First Main Directorate, which was engaged in espionage and all kinds of sabotage outside the USSR. In his own words, his position in the KGB was “captain-engineer.” Like many KGB officers, Yakunin, who worked in this structure for a total of 22 years, soon found himself in the “diplomatic” work in the West. In 1985-91, he was the secretary of the Permanent Mission of the USSR to the UN in New York.

In February 1991, Yakunin returned to Russia. Upon returning, he became the head of the board of the company International Center for Business Cooperation (St. Petersburg). Around this time, he met with Vladimir Putin. On November 10 of the same year, he, together with Putin and his friends, co-founded the Lake (Ozero) Dacha cooperative to the north of St. Petersburg. In 1997, Vladimir Putin moved to Moscow and in March became the head of the Main Control Directorate (GKU) in the presidential administration, and Vladimir Yakunin was soon appointed head of the northwestern branch of the GKU.

After Putin came to power in 2000, Yakunin also moved to Moscow and took the post of Deputy Minister of Transport of the Russian Federation. In this ministry, he oversaw the merchant fleet and seaports. In February 2002, Yakunin received the position of Deputy Minister of Railways of Russia. This ministry was abolished on March 9, 2004. Part of the functions of this ministry was transferred to the newly created Russian Railways state corporation. Almost a month after the creation of Russian Railways, its board unanimously approved Yakunin's candidacy for vice president of the new structures. On June 14, 2005, by order of the Russian government, Vladimir Ivanovich headed this largest railway company in Eurasia. Besides, in 2008, Yakunin also headed the Armenian South Caucasus Railway (SCR), which was completely dependent on Russian Railways, and was meddled in corruption scandals (for example, the Armenian authorities accused the road of tax evasion, embezzlement and non-fulfillment of obligations to develop the infrastructure of the SCR).

Despite corruption scandals in Russian Railways itself, Yakunin was twice reassigned to the post of head of this railway giant. After Russia annexed Crimea in 2014, he was included on the US sanctions list (and on Canada’s extended sanctions list in 2019). However, the EU did not include Yakunin on its lists. Yakunin (who was also the head of the International Union of Railways) got under American sanctions not for the activities of Russian Railways in Crimea, because formally so-called The Crimean Railway, managed by the occupation authorities of the peninsula, is not part of the Russian Railways, but because he was and is one of Putin’s closest associates and, as such, supported the annexation of Crimea. We know about his position from his own words (we quote his blog):

“A group of French parliamentarians, members of the French National Assembly and Senate, visited Crimea. The visit caused a great public outcry, and I have a cue about this. Such a visit, of course, means the desire to get objective information about the situation in Crimea, since the desire to know the truth is natural for any politician. Moreover, the French distrust of their media is equal to the degree of the hypocrisy of these media in covering events related to Ukraine and Crimea …”

As for corruption scandals in Russian Railways that are directly related to Yakunin, they began back in 2013 after a series of investigations by Alexey Navalny’s Anti-Corruption Fund. Briefly summarizing these investigations, we were talking about the misappropriation of enormous amounts of money by the state-owned company, which was used for the construction of huge mansions in the Moscow Region. It is highly likely that the enormous resonance caused by these investigations made the Kremlin finally dismiss Yakunin in 2015. The large-scale corruption in Russian Railways associated with the enrichment of the company's top management led to a sharp impoverishment of its ordinary employees, which it was not possible to hide. In 2013, Yakunin personally reported to Putin about the difficult financial situation in Russian Railways, but he explained it by the falling demand for rail transportation. This reason really played a role, but not the main one, because the decline in economic performance in the company amounted to only a few percents and would hardly lead to problems that the industry did not even have in the 1990s, before the corporatization of railways in Russia.

After his dismissal, Yakunin opened the “Dialogue of Civilizations” Forum in Berlin in 2016. The goal of this organization is to advocate the views of the Kremlin on Russia's foreign policy as its “civilizational uniqueness” before the German authorities (the largest trade partner of the Russian Federation in the EU). Unfortunately, the German authorities reacted to this activity of Putin's close associate quite loyally granting him a residence permit.

- abuse of official position and corruption as the head of Russian Railways (illegal enrichment, bringing a previously profitable company to the brink of bankruptcy, impoverishing ordinary employees of Russian Railways and neglecting their economic interests);

- actively promoting the domestic and aggressive foreign policy of the Putin regime (both as head of the Russian Railways and, since 2016, as the head of an “independent think-tank” in the German capital);

- being one of Putin’s closest oligarchs, whose financial power and personal devotion to the leader is a foundation of the Putin regime of uncontrolled personal power to this day.