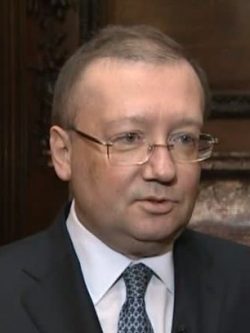 Rector of the Diplomatic Academy of the Ministry of Foreign Affairs of the Russian Federation, Ambassador of Russia to the United Kingdom (2011—2019)

YAKOVENKO, Alexander Vladimirovich (b. 1954) graduated from MGIMO in 1976 and began diplomatic service at the Office of International Organizations of the USSR Ministry of Foreign Affairs. In 1981, he joined the Permanent Mission of the USSR to the UN in New York, where, according to British media, he was suspected of espionage. From 1986 to 1990, Alexander Yakovenko worked as head of the Department of Foreign Policy Planning of the Ministry of Foreign Affairs of the USSR.

Attempts to intervene in UK domestic affairs in the interests of the Kremlin, involvement in attempted murder, corruption.

Career Soviet diplomat Yakovenko, who was fortunate enough to get a job in New York at the height of the Cold War at the age of 27, is extremely loyal to the Kremlin. Relations between Moscow and London have remained very tense since the assassination of Alexander Litvinenko, and the Kremlin needed a reliable person to work on the “enemy” territory. The attempt by Russian intelligence agents to kill Sergei Skripal in the spring of 2018, the media publication about Yakovenko’s participation in lobbying for Brexit in the summer of that year, and his past espionage activities accelerated his departure from the post of ambassador.

According to The Sunday Times and the Dossier Center, the Russian ambassador, Alexander Yakovenko, offered the millionaire Arron Banks, who had spent £12 million on the Brexit campaign, the gold mines of Siman (Sergei) Povarenkin. The Russian special services employee Alexander Udod, expelled after the Skripals case, organized meetings with Mr. Banks at the embassy. The Times learned about Arron Banks’ contacts with Russian officials from his correspondence. As it turned out, Banks met with the Russian ambassador to Britain, Alexander Yakovenko, four times. Shortly before the referendum on leaving the EU, Yakovenko suggested he take part in a deal involving “six gold mines in Siberia” owned by Russian gold miner Sergei Povarenkin. It was supposed to merge six Russian companies into one under the management of British Oakwell Capital. The deal fell through for an unknown reason, but collaboration continued. Already, after Brexit, Banks again negotiated joint gold mining with the Russians, this time in Guinea with Ilya Karas. Another Brexit lobbyist, and Banks’ business partner, Jim Mellon, acquired a stake in the Russian Alrosa diamond mining group with the help of Povarenkin.

According to The Times, Russia and Alexander Yakovenko were accused of interfering in Britain’s internal affairs during the election campaign. According to the publication, about 6,500 Twitter accounts were created in Russia to support the Labour Party and its leader, socialist Jeremy Corbin, before the parliamentary election. By the way, the Twitter account of the Russian embassy in the UK under Yakovenko became a collection of trolling. In a non-diplomatic manner, it regularly published openly homophobic and sharply anti-Western posts and whataboutery statements as an answer to any criticism of Russian politics.

We undoubtedly oppose to the inheritance of the Soviet or Putin diplomatic style in a future free Russia. Not confrontation with the free world, but full integration into it is in the interests of the Russian people. However, one should not expect this to happen by itself. This should be preceded by the recovery of Russian society, the elimination of the Soviet neglect of personal freedoms, and of treating a person as a raw material in the state mechanism. This is a difficult process, but necessary and inevitable, and the longer the power of the heirs of the Chekists and Bolsheviks lasts in Russia, the more painful it may turn out for Russian citizens.

Kicked out for being a SOVIET AGENT: The damning evidence that Putin’s man in London, who mocks Britain at every turn as his countrymen murder their enemies on our soil, was expelled from the US in a Cold War spy purge