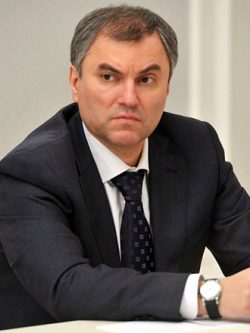 VOLODIN, Vyacheslav Viktorovich (b.1964) is one of the key figures in modern Russian politics. Vyacheslav Volodin was a member of the Communist Party of the Soviet Union since 1985, and up until the collapse of the USSR he was teaching at the Saratov Institute of Agricultural Mechanization. In 1990, he was elected as a member of the City Council of Saratov. Since 1992 Volodin was the Deputy of the Head of Administration of Saratov, since 1994 deputy chairman of the Saratov Regional Duma and in 1996 he was appointed to the Vice Governor of the Saratov region. In 1999, he was elected to the State Duma, becoming deputy chairman and the head of the Fatherland-All Russia party until it merged with the Unity party. In October 2010 he was appointed Deputy Prime Minister and in December 2011 he became the first Deputy Chief of Staff of the Presidential Executive Office (Presidential Administration). From January 22, 2017, he has been a member of the Supreme Council of the United Russia party. On October 5, 2019, he became the 10th Chairman of the State Duma.

Contributing to the anti-democratic seizure and retention of power.

Vyacheslav Volodin invariably supported Vladimir Putin’s policy of the usurpation of power, suppression of civil rights and freedoms, elimination of democratic institutions, creation of a dictatorial regime in Russia, and aggravation relations with the West. As the first deputy head of the Presidential Administration, he actually ran the entire domestic policy in Russia. At that time, the Kremlin tightened control over the media, labeled many independent NGOs as “foreign agents” and granted the security services broader powers of surveillance. It won't be an exaggeration to say that under Volodin the Putin regime finally devolved into a dictatorship.

In 2014, Vyacheslav Volodin supported the annexation of Crimea and Russian armed involvement in the war in the South-East of Ukraine. Thus, in April 2014, the U.S. Treasury put Volodin on the Specially Designated Nationals List (SDN), a list of individuals sanctioned as “members of the Russian leadership's inner circle.” In May 2014, Volodin was added to the European Union sanctions list due to his role in the 2014 Crimean crisis. In October 2014, at a meeting of the Valdai International Club, Volodin, when asked about the sanctions against the Kremlin, stated that “attacks on Putin are attacks on Russia”, and “if there is no Putin — there is no Russia.”

From Imperious Curator to Outspoken Speaker: The Curious Fate of Vyacheslav Volodin