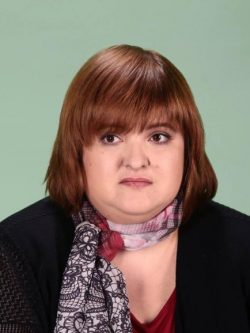 VOLKOVA, Violetta Vladimirovna (b. 1973 in Moscow) graduated from Moscow State Law Academy in 1996 and started her career as an assistant prosecutor in the Kuzminki District Prosecutor’s Office in Moscow. In 1997, she began working at the Garantia veteran social security fund, and in the early 2000s, she started private legal practice. In 2002, she became an attorney and began working at the Moscow Regional Collegium of Advocates. In 2006, together with an attorney Lesnikov, she created her own Collegium, where she was involved in raiding cases.

Violetta Volkova became known to a wider public after the start of mass protests against falsified election results in 2011-2012, when she provided legal assistance to detainees, in particular, Sergei Udaltsov and Left Front activists. Then, Violetta Volkova became the lawyer of Ekaterina Samutsevich, one of the members of the Pussy Riot protest punk-rock band. In October 2012, she represented a leftist activist Leonid Razvozzhaev.

Soon after the annexation of Crimea and the outbreak of war in eastern Ukraine, she openly switched the sides. In December 2017, Volkova was a lawyer for the leader of the pro-Kremlin SERB movement Igor Beketov (nicknamed Gosha Tarasevich) in the hooliganism case. He had disrupted the screening of the film about Ukrainian fighters, Flight of a Bullet, in the Oktyabr movie theater on Novy Arbat.

Cooperation with the state security agencies of the Russian Federation, discrediting the Russian opposition movement, corruption.

Violetta Volkova was repeatedly exposed in collaboration with the FSB of the Russian Federation starting with the Pussy Riot case. Volkova takes part in FSB special operations to discredit the Russian opposition movement and initiate the persecution of opposition members. She acts as a Kremlin propagandist on Russian state TV channels. She was allegedly involved in corrupt activities and raider attacks on enterprises in Moscow since the late 1990s.

The agencies Volkova was involved in have long and tight connections with Russian state security agencies and authorities. Her first job after the prosecutor’s office, the Garantia Fund, was created directly by the FSB and the Ministry of State Property in the early 1990s, while the fund’s headquarters located in the building of the Moscow government. Officially, it resolved the social issues of veterans, however, as an examination showed, the fund allocated only 1.2 percent of its expenses for these purposes. The audit revealed inappropriate use of state budget funds and there were no reports for some financial operations.

Having received an attorney’s license, Volkova began to deal with raiding cases. In 2007-2008, she represented the interests of the co-owner and president of the Financegroup Oleg Shvartsman. According to him, the companies that belonged to him had “relations with the Presidential Administration and its security block.” His political organization, the Union of Social Justice of Russia, had a clear pro-Kremlin stance. By his admission, his business was “consolidation of various assets” with the help of “voluntary-compulsory instruments” in the interests of the state corporation Rosboronexport, which is, in fact, state-approved raiding.

Volkova’s defendant in the Pussy Riot case, Ekaterina Samutsevich, refused her services and filed complaints with the Attorney Chamber twice about Violetta Volkova. For the first time, Volkova did not return the keys to her apartment and her passport and refused to give the complaint to the ECHR to her new lawyers. Another time, according to Samutsevich, Volkova provided unqualified legal assistance and contributed to the conviction. Another convict in the Pussy Riot case, Nadezhda Tolokonnikova, claimed that after the conflict between Tolokonnikova and the administration of the penal colony arose, Volkova offered her to “quietly solve the problem of transfer” [to another colony], “using her personal connections in the leadership of the Federal Penitentiary Service,” calling her “not to escalate the scandal.”

The common interests of Volkova and the Kremlin were manifested in the defense strategy of the Bolotnaya Square case participant Leonid Razvozhzhaev, whom Russian security agencies illegally abducted in October 2012 in Kyiv and soon delivered to Moscow. His lawyers were Mark Feygin, Dmitry Agranovsky, and Violetta Volkova, but soon Mark Feigin was suspended from participation in the case. According to him, the investigation put serious pressure on Razvozzhaev through Volkova and Agranovsky. Three years later, these fears fully got confirmed. In 2015, NTV released the propaganda film “Pathology of Protest” with Leonid Razvozzhaev as the main speaker. Guided by Volkova and Agranovsky Razvozzhaev blamed the police provocation and forceful dispersal of the protest on May 6, 2012, on the leaders of the liberal opposition, who allegedly provoked leftist activists. Volkova and Agranovsky publicly adhered to this position. However, “confession” did not help Razvozzhaev to go on parole, and he was released only in the spring of 2017.

After the annexation of Crimea and the outbreak of war in eastern Ukraine, Volkova openly sided with the Putin regime. She became one of the instigators of anti-Ukrainian hysteria and a frequent guest on propaganda shows of Russian federal TV. She ceased to hide her cooperation with the authorities. In December 2016, under the control of operatives, she transferred a bribe of 600 thousand rubles to the Interior Ministry investigator Pavel Yurchenko. When receiving money, he was detained by FSB officers. In 2017, she released a propaganda film denouncing the “black bookkeeping” of Alexei Navalny. Based on that film, two years later the Investigative Committee opened a case against the Anti-Corruption Foundation. In the same year, she defended the well-known pro-Kremlin provocateur Igor Beketov (nicknamed Gosh Tarasevich) in the hooliganism case. He had disrupted the screening of the film about Ukrainian fighters, Flight of a Bullet, in the Oktyabr movie theater on Novy Arbat.