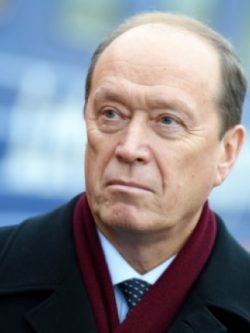 VESHNYAKOV, Alexander Albertovich (b. 1952) is a Russian politician and diplomat, a former Chairman of the Central Election Commission of Russia in 1999-2007. He grew up in Arkhangelsk and graduated from the Arkhangelsk Naval College and the Leningrad Higher Marine Engineering School, and worked as a sailor on ships of the Northern Shipping Company. Being a member of the Communist party helped him to grow in his career and led him to the post of secretary of the Arkhangelsk City Committee of the Communist party in the late 1980s. In 1990-93, as a People’s Deputy of the Supreme Council, he voted for the ratification of the Bialowieza Agreement on the termination of the USSR.

Veshnyakov left the Communist party in 1991 after the failed August coup. In November 1993, he became an adviser to the Sea Transport Department of the Russian Ministry of Transport. In 1995, Veshnyakov graduated from the Diplomatic Academy of the Ministry of Foreign Affairs of Russia with a degree in international law. Two years later, he got a Ph.D. in law, majoring in electoral standards in international law and their implementation in the legislation of the Russian Federation.

Since March 1994, Veshnyakov began to work in the Central Election Commission (CEC) of the Russian Federation. In March 1995, he was elected Secretary of the CEC. In 1999 and 2003, he was elected and re-elected Chairman of the CEC. Under his guidance, the Duma (1999, 2003) and the presidential (2000, 2004) elections were held twice. In March 2007, his term expired. In early 2008, Veshnyakov was appointed Ambassador Extraordinary and Plenipotentiary of the Russian Federation to Latvia, where he worked until the end of 2016.

Creating conditions for usurping power by Putin and the United Russia party and establishing authoritarianism in Russia.

In one of his interviews, Veshnyakov said that he had come to the CEC because he was “obsessed” in democratic elections. He probably did not dissemble: until a certain time, the elections in Russia corresponded to international standards and, although not ideally, reflected the political climate. According to Veshnyakov, he held “the most democratic elections in the history of our country.” However, after Putin came to power with his desire to usurp power, Veshnyakov did nothing to prevent this, although he had a good reputation and a certain authority.

In 2004, Veshnyakov called the proposal put forward by Putin to abolish direct gubernatorial elections “a necessary political measure,” and the electoral reform that he supported made it easier for the Kremlin to take total control over the State Duma. According to the federal law on the election of members of the State Duma of the Federal Assembly adopted in 2005, the barrier for parties running in the Duma on party lists was raised from 5% to 7%, the lower turnout threshold and the ability to vote against all candidates were removed by law, single-member voting constituencies were canceled, members of one party were now forbidden to run on another party’s lists, and parties were prohibited from joining electoral blocs. The first parliamentary elections under the new law, which turned out to be one of the dirtiest in modern Russian history, took place right after Veshnyakov’s resignation, under Vladimir Churov, which, however, does not remove responsibility from Veshnyakov for granting legitimacy to innovations that caused significant damage to the institutional foundations of Russian statehood.

As authoritarian tendencies developed, Kremlin’s priorities began to change. The “autonomous” and insufficiently obedient Veshnyakov became a risky asset on the eve of the uncertainty about the course and results of the presidential election scheduled for 2008 in the absence of Putin in the ballots. Alexander Veshnyakov allowed himself to criticize individual manifestations of Putinism. He called the mass practice of removing candidates from parliamentary elections by a court decision “abnormal,” he hoped for a return of direct elections of governors, he called the initiative of United Russia to return an early vote, which created a lot of opportunities for frauds “discrediting the law,” expressed concern regarding the amendments proposed by United Russia to the law on combating extremism, and also opposed the bill put forward by United Russia which repealed a requirement for members of the Central Election Commission and heads of regional election commissions to have a law degree.

Nine months before the State Duma elections and a year before the presidential election, it was important for the Kremlin that a loyal person heads the Central Election Commission. On March 27, 2007, Vladimir Churov became the head of the CEC, who stated that he considered his main difference from Veshnyakov that he was “less inclined to comment on the electoral law.”

In 2008, Veshnyakov was appointed Russian Ambassador to Latvia. As a diplomat, he strictly followed the official foreign policy of the Russian Federation. On December 15, 2016, he was relieved of his duties as ambassador.