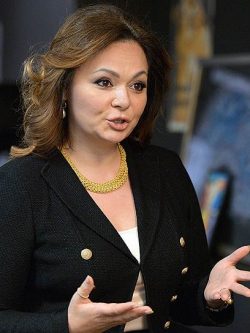 VESELNITSKAYA, Natalia Vladimirovna (b. 1975) is a Russian lawyer, managing partner, solicitor at the Kamerton Consulting attorney bureau of the Moscow region. Between 1999 and 2001, she worked at the Prosecutor's Office of the Moscow Region. In 2005, Natalia Veselnitskaya set up her own law firm, Kamerton Consulting. Until 2013, her company represented the interests of the Office of Logistics of the FSB of the Russian Federation.

On January 8, 2019, New York’s federal prosecutor accused Veselnitskaya of obstruction of justice, of attempts to thwart the investigation of the money-laundering by an unnamed influential businessman from Russia and his investment firm.

Veselnitskaya was put on the United States wanted list and faces up to ten years in prison. According to the U.S. Department of Justice, the case Veselnitskaya was trying to prevent was related to an investigation into the laundering of 5.4 billion rubles, or more than $200 million, stolen by corrupt Russian officials, whose actions were disclosed by Hermitage Capital auditor Sergei Magnitsky.

In 2017, the son of U.S. President, Donald Trump Jr. published a correspondence from which it followed that he met with Veselnitskaya during his father's election campaign. According to Trump Jr., Veselnitskaya promised to transfer compromising materials about the Democratic presidential candidate Hillary Clinton. Veselnitskaya rejected that she owned the documents defaming Clinton.

Russian Lawyer Who Met With Trump Jr.: I Didn’t Have Clinton Info They Wanted

Russian lawyer who met with Trump Jr. was in touch with top Russian prosecutor