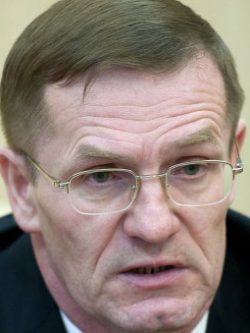 VASILYEV, Sergey Vasilyevich was born on June 22, 1960, in Miass, Chelyabinsk region. In 1981, he graduated from the Sverdlovsk Law Institute. He worked as a trainee in the prosecutor’s office of the Leninsky district of Zlatoust, Chelyabinsk region, as a prosecutor of Novy Urengoy, Yamal-Nenets Autonomous Okrug, as a deputy prosecutor of the South-Eastern Administrative District of Moscow, and the Lublin Interdistrict Prosecutor of Moscow. From July 2001 to July 2005, he was Deputy Head of the Personnel Department of the General Prosecutor's Office of Russia. From August 25, 2005, to August 29, 2006, he was the Prosecutor of the Moscow region. On August 30, 2006, he was appointed Deputy Minister of Justice of the Russian Federation.

On April 10, 2007, Vasilyev was appointed Director of the Federal Registration Service. On February 11, 2009, he became the Head of the Federal Service for State Registration, Cadastre, and Cartography - Chief State Registrar of the Russian Federation (Rosreestr). Among the reasons for his dismissal in October 2012 where the failure to meet the deadlines for the cadastral valuation of capital construction projects and the disagreement with plans to designate St. Petersburg as a pilot region as part of the transfer of powers of Rosreestr territorial bodies to the regional level. In November 2012, Vasiliev was appointed Director of the Department for Monitoring and Verification of the Implementation of Decisions of the Government of the Russian Federation.

The exercise of administrative functions within the framework of the current anti-democratic regime.

Sergey Vasilyev is one of the career officials whose indifference to the seizure of power by a group of people associated with organized crime and indifference to the flagrant corruption supports and nourishes the existing political regime in Russia, which evolves into dictatorship. Vasilyev is a member of the government and is responsible for his decisions and their implementation.