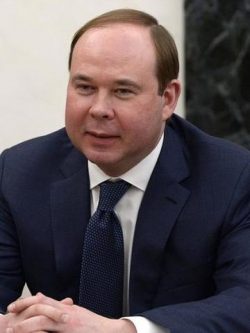 Head of the Presidential Administration of Russia.

He graduated from the MGIMO, Faculty of International Relations, in 1996.

The main reason for Vaino's accusation is his many years of holding senior positions in the executive branch, direct active participation in the creation and functioning of an unlawful, anti-democratic, corrupt state system. “Anton Vaino is a top-class apparatchik. For many years he led the daily work schedule of the President. Very correct! Always well-prepared and organized. Of those who do not make mistakes. Amazingly efficient. He perfectly knows the entire political and administrative elite of the country.” This is how Vaino is characterized by Oleg Morozov, the former head of the Kremlin's internal policy department (the author's spelling is preserved).

For a pseudoscientific publication “Capitalization of the future” Vaino is included in the Dissernet database. The publication describes a “new paradigm of predictive control” and a Nooscope, a device for recording changes in the noosphere. Almost all sources cited by the author are his own publications from 2010-2012.