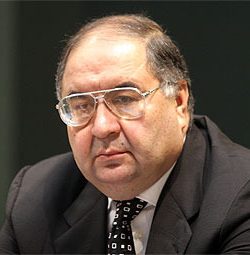 USMANOV, Alisher Burkhanovich (b. 1953) graduated from MGIMO with a degree in international law in 1976. His fellow student was Sergey Yastrzhembsky, the future press secretary and assistant to Boris Yeltsin and Vladimir Putin. He worked as a research fellow at the USSR Academy of Sciences, senior assistant to the Central Committee of the Komsomol of Uzbekistan. In 1980, Usmanov, along with his friends, the children of high-ranking Uzbekistan officials, was sentenced to 8 years in prison for extorting bribes and stealing state property through fraud. In 1986, he left the penal colony for parole, and for some time he worked as a patent specialist at the Institute of Physics of the USSR Academy of Sciences in Andijan. Then, with the help of contacts acquired during his studies at MGIMO, he returned to Moscow, where he began working at the Foreign Economic Association of the Soviet Peace Committee, rising to the rank of the General Director.

Since 2006, he has been the owner of the Kommersant publishing house, and since 2008, a partner of Yuri Milner and shareholder of DST (Mail.ru Group). In 2012, Usmanov, through AF Telecom, received a controlling stake in the communications giant Megafon. In the same year, with partners Vladimir Skoc and Farhad Moshiri, he founded the super-holding USM Holdings, combining Metalloinvest, MegaFon, Scartel, Mail.Ru Group, Disney Russia, and MUZ-TV. Since 2008, he has been the President of the International Fencing Federation (FIE), re-elected in 2012 and 2016.

The basis of Usmanov’s oligarchic capital was assets that he, together with business partners and with the support of high-ranking officials, established control over during the large-scale privatization of state enterprises carried out in Russia from the mid-1990s to the beginning of the 2000s. Among the billionaire’s influential friends is Dmitry Medvedev, as well as former first deputy prime minister Igor Shuvalov and former Rosvooruzhenie general director Yevgeny Ananyev.

In March 2017, Alexei Navalny and the Anti-Corruption Fund (FBK) published an investigation film He Is Not Dimon For You, which cited evidence of Usmanov’s corrupt ties with the top leadership of the Russian Federation. In the ensuing public debate, Navalny published a detailed account of the history of the initial accumulation of Usman's billions. According to sources cited by him, from 1993 to 2002, Usmanov, with the help of Middlesex Holding, Interfin and Gazprominvest, carried out a fraudulent privatization scheme of the Oskol Electrometallurgical Combine (OEMK), Lebedinsky GOK and other key Russian metallurgy companies.

Commentary by Alexey Navalny: “When the shares of OEMK and Lebgok are bought back in your favor from the state-owned Gazprom, it is privatization. It used to be a state-owned asset, and now it has become Usmanov's offshore asset. The fact that the seller's company (Gazprominvestholding) at the time was also headed by Usmanov is just a giant multilayer conflict of interest.”

Usmanov, for three consecutive years, from 2013 to 2015, was the richest man in Russia, according to Forbes. His personal fortune in 2015 was estimated at $18.6 billion. Bloomberg named Usmanov the richest Russian in 2012, evaluating his fortune at $20 billion. That same year, he entered the top 100 most influential people in the world, according to Forbes, and the annual ranking of 50 most influential people, according to Bloomberg Markets Magazine. At the end of 2018, Alisher Usmanov’s fortune was estimated at $12.6 billion. For some years he was among the richest residents of Great Britain and Switzerland.

Usmanov was involved in the scandals related to his attempts to pressure the media and restrict freedom of speech.

In 2007, former British Ambassador to Uzbekistan Craig Murray published the results of an investigation alleging that Alisher Usmanov “was not a political prisoner, but was a bandit and racketeer who justly spent six years in prison.” With the help of lawyers, the oligarch managed to remove compromising information from Internet sites and block web resources that refuse to delete it.

In 2011, Usmanov, as the owner of Kommersant Publishing House, personally attempted to censor the publication of a photograph of the ballot paper with obscene inscriptions addressed to Vladimir Putin in the Kommersant-Vlast magazine, and then secured the dismissal of the magazine’s editor-in-chief Maxim Kovalsky and the CEO of the holding Andrey Galiev.

In 2012, The Times reported that Usmanov hired the London-based PR company RLM Finsbury, which edited an article about Usmanov on the English Wikipedia, removing information about Usmanov’s criminal charges and other critical reviews.

In 2016, Usmanov lost the status of a tax resident of the Russian Federation, since he was abroad for too long. Forbes suggested that the real reason for this was the intention to optimize taxes due to changes in Russian legislation on the control of foreign companies.

In 2018, Usmanov was included in the Kremlin Report of the US Treasury, a list of 210 officials, politicians and businessmen close to Russian President Vladimir Putin.

In August 2019, it became known that the Citadel holding associated with Alisher Usmanov tripled its revenue for 2018, and also absorbed four competitors, becoming a super-monopolist in the market of “operational-search measures” (SORM), developed in the interests of Russia's state security services for total control of mobile and Internet traffic. According to RBC, the Citadel occupied 60 to 80 percent of the wiretap market. The company is part of IKS Holdings of Anton Cherepennikov, a partner of Usmanov.

Indirect evidence of Usmanov’s complicity in the establishment and functioning of the criminal regime is his receipt of the highest state awards, including orders of Merit for the Fatherland, orders of Honor and Alexander Nevsky, as well as official gratitudes from the President and Government of the Russian Federation.