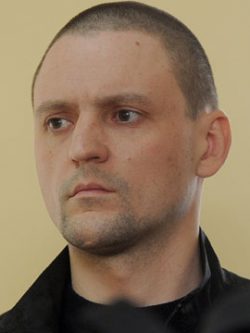 Russian left politician, leader of the movement "Vanguard of the Red Youth", coordinator of the "Left Front", coordinator of the Council of Initiative Groups of Moscow and the public "Moscow Council". One of the leaders of the protest movement in Russia in 2011-13. Supports a special operation in Ukraine, disperses Kremlin propaganda about Bandera and Nazis.

Public support for Russian military aggression against Ukraine. Sergey Udaltsov is included in the report "1500 warmongers" compiled by the Free Russia Forum. The report contains the names of Russian public figures, military commanders, members of the parliament, propagandists, artists and athletes who have publicly spoken out in support of Putin's aggression or are directly involved in it. The Free Russia Forum is seeking sanctions against them in the European Union.