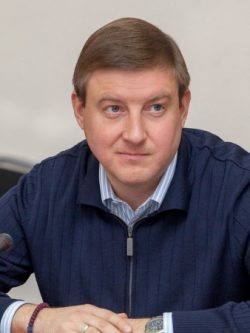 TURCHAK, Andrey Anatolyevich (b. 1975) and his political success are associated with his father, Anatoly Turchak, who used to go to the same judo club along with Vladimir Putin and the Rotenberg brothers. Apparently, such connections proved to be very useful for Turchak Sr., since having started his career as a simple mechanic at the Leninets factory, he soon became the general director of the enterprise, and then headed the Leninets Holding Company OJSC.

Turchak Jr. also began practicing judo early on, already at the age of 16 becoming a coach at the youth sports school of the Olympic reserve. At the age of 20, Andrey Turchak already became a manager at the Leninets subsidiary, and at 25 became the restructuring director and then the director of corporate policy at Leninets. At 28, Andrei Turchak became vice president of Leninets. In August 2005, Andrey Turchak was appointed coordinator of the youth policy of the United Russia party and joined the coordinating council of the Young Guard of United Russia. Two years later, Turchak was elected chairman of the coordinating council of the youth organization.

In subsequent years, Turchak’s career advancement was only accelerating. In 2006, the Bureau of the Supreme Council of United Russia recommended Turchak for the post of a member of the Federation Council from the parliament of the Nenets Autonomous Okrug. In 2007, he became a member of the Pskov Regional Assembly of Deputies from the United Russia party, and over the next two years, he combined this post with membership in the Federation Council. In February 2009, President Dmitry Medvedev appointed Turchak Governor of the Pskov Region. At that time, Turchak was 33 years old.

In August 2010, a conflict broke out between the young governor Turchak and Oleg Kashin, a correspondent for Kommersant newspaper. The reason for the conflict was merely a commentary in LiveJournal, in which Kashin compared the governor of the Kaliningrad region Georgy Boos with any other governor, citing Turchak as an example in the following terms: “Listen, well, you’re demonizing him completely, but compare him with any governor, not even with Ramzan or Tuleyev, with any fucking Turchak - is Boos something uncompromising?”

Turchkak’s reaction turned out to be extremely acute: “You have 24 hours to apologize. You can do this here or in a separate post.” However, the journalist did not apologize. Subsequently, the governor deleted his comment. About three months later, on November 6, 2010, Oleg Kashin was attacked. As a result of the attack, both his jaws and a shin were broken, and the phalanges of the fingers were torn off. Doctors also diagnosed a concussion.

In 2015, Kashin announced that his case had been resolved. The attackers are Danila Veselov and Vyacheslav Borisov. The first was the security chief of the St. Petersburg mechanical plant, a subsidiary of the Leninets holding, the second was a security guard of the same enterprise. Mikhail Kavtaskin, another security guard at a mechanical plant, was their driver. They gave evidence, from which it followed that Turchak's comrade-in-arms, the manager of the Leninets holding, Alexander Gorbunov, ordered the attack. He paid them 3.3 million rubles. According to investigators, the motive for the crime was a conflict with Governor Turchak. However, the attack was not blamed on the latter and Turchak did not bear any responsibility for this crime. This scandal did not negatively affect his career.

On October 12, 2017, by decree of the President of Russia, he was relieved of his post as governor of the Pskov Region at his own request. However, on the same day, Dmitry Medvedev, chairman of the United Russia party, appointed him acting secretary of the General Council of United Russia instead of Sergei Neverov. On November 2, 2017, Turchak was nominated by the regional parliament for the post of a senator from the Pskov region. During the presidential election in 2018, Turchak was in the initiative group that nominated Vladimir Putin for the post of president of the Russian Federation.

Active support for the Putin regime, nepotism, the organization of the assassination attempt on journalist Oleg Kashin.

The biography of Andrey Turchak convincingly indicates that his career take-off became possible primarily due to his father's acquaintance with Vladimir Putin and the friendly relations between them. Andrey Turchak does not have any special, outstanding abilities to advance so early and so quickly up the career ladder, from a simple judo trainer right up to the governor and secretary-general of the ruling party. The rapid promotion of a young judoka is a typical example of the depravity of the current system under Putin when family ties and acquaintances become more important than a person’s professional qualities.

For many years, working as a functionary in the government system, Turchak never doubted the rightfulness of the political course of Vladimir Putin, invariably supporting any actions of the country's leadership. One of the striking manifestations of such a steady loyalty was the support by Turchak of the pension reform in the country, which caused a storm of indignation in society.

Andrei Turchak is considered the paymaster of the attack on the journalist Oleg Kashin, however, despite the convincing evidence of his involvement in this crime, he still did not bear any responsibility for that. On the contrary, he advanced up the career ladder and strengthened his political position.