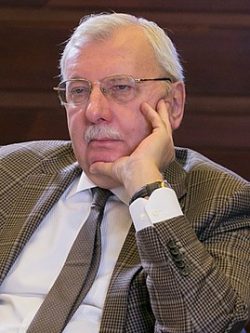 TV presenter, Dean of the Higher School of Television at Moscow State University

TRETYAKOV, Vitaly Tovievich (b. 1953 in Moscow) graduated from the Faculty of Journalism of Moscow State University in 1976 and got a job at the Novosti press agency, where he worked until 1988. In 1988-1990, Tretyakov worked in the editorial office of the Moskovskie Novosti newspaper as an op-ed columnist, then as a political commentator and, finally, as deputy editor-in-chief. In 1990, Vitaly Tretyakov created Nezavisimaya Gazeta and was its editor-in-chief until 2001, as well as of its separately published applications: Independent Military Review, NG Religion, Ex libris NG and others. From 1995 until his dismissal from Nezavisimaya Gazeta in 2001, he enjoyed the patronage of oligarch Boris Berezovsky.

From 2001 to 2013, Tretyakov was the general director and chief editor of the Independent Publishing Group NIG. From 2005 to 2009, he was the chief editor of the Political Class magazine, and in 2006-2007, the editor-in-chief of the Moskovskiye Novosti weekly and General Director of the Foundation for the Promotion of the Development of Education in the Field of Journalism (to the present).

In 2000-2002, Tretyakov was a professor at the Department of Applied Political Science at the Higher School of Economics. In 2001-2007, he was a professor at the faculty of International Journalism at MGIMO. Since 2008, Tretyakov has been the Dean of the Higher School of Television at Moscow State University. Vitaly Tretyakov considers former KGB officer and Prime Minister Yevgeny Primakov and Patriarch of the Russian Orthodox Church Kirill (Gundyaev) his idols among his contemporaries. He admires the work of the notorious far-right philosopher Alexander Dugin and political propagandist Andranik Migranyan.

The creator of the Nezavisimaya Gazeta, which once claimed to be impartial and even liberal, has been dependent on the drivers of the political situation for the third decade. In the 1990s, he served Berezovsky and then began praising Putin and his foreign and domestic policies. He dedicated several books to Vladimir Putin, and, according to him, “Putin is undoubtedly one of the three most politically successful leaders of the country of the 20th and the beginning of the 21st century Ahead are only Stalin and Lenin, and Putin is the third.”

For many years, Vitaly Tretyakov fostered the image of a moderate, respectable expert, sometimes allowing himself to criticize “a few excesses” of Putin’s policy of building a regime of personal power. But, as in the case of many other propagandists, his “moderate” mask vanished with the annexation of Crimea and the armed intervention of the Kremlin in the internal affairs of Ukraine. Since then, Tretyakov fully joined other pro-Kremlin agitators and began to use standard propaganda vocabulary, based on deliberate misinformation. Here are just a few examples: “Ukraine is a state with the artificial territory, within artificial borders, which fell to the Ukrainian nationalists in 1991 as a gift of fate,” “Ukrainianism is based on the fact that Ukraine is for Ukrainians. We are ready to tolerate you, although you are not Ukrainian, if you speak Ukrainian, worship Bandera and shout “whoever doesn’t jump is Muscovite,” “Crimea is not Ukraine anymore. Donbas is no longer Ukraine,” “Banderites’ power makes you speak Ukrainian, think Ukrainian and kiss the statue of Bandera,” etc.

Tretyakov does not recognize the sovereignty and territorial integrity of Ukraine fundamentally, compares the neighboring country with “an ulcer that needs to be removed,” expresses the view that “the Ukrainian language is worse than Russian, it is certainly one level linguistically lower” and it attacks Russians who consider otherwise. Using the status of the dean of the Higher School of Television of Moscow State University, he intentionally pits Russians against Ukrainians, fuels an atmosphere of intolerance in Russian society and exposes his compatriots as crazy imperialists.

He plays the role of the propagandist completely consciously, not being embarrassed by this label. Propagandists, according to Tretyakov, say “sincerely and honestly, without deceiving.” “Every journalist is a propagandist. There are no journalists who are not involved in propaganda… If someone says in my face: “You are a propagandist” - this person will be completely verbally smeared in a minute and a half. The audience will understand that he is an idiot. Many are shy about being accused of this. You must not get lost. You must defend your country, your corporation, and not be fooled by these cheap tricks.” Tretyakov follows the pro-Kremlin narrative that objectivity does not exist anywhere, but there is only someone’s selfish interests, and therefore it is necessary to support “your” side of the conflict, in this case, the Russian state with its ruling clique. “I struggle with the opinion that there is honest journalism in the West and that there are nurseries of vile propagandists in Russia. First, to think so means not respecting yourself. Secondly, this is not true. By the way, in Russia, there really are hotbeds for lying journalists. Basically, they are in the liberal media,” says Tretyakov.

Tretyakov is very concerned about the search for “hostile actors” and spies inside the country. He includes, among them, employees of foreign foundations and activists of the opposition to the Putin dictatorship. In that spirit, he commented on the protests in the summer of 2019 against the non-registration of independent candidates for participation in the elections to the Moscow City Duma. “The protests of the liberal opposition in recent weeks in Moscow are provocative and, undoubtedly, are the beginning of a planned long-running campaign aimed at the presidential election of 2024. Its development and coordination are carried out from abroad by Mikhail Khodorkovsky’s organizations in cooperation with Western agencies, including almost all Western and NATO media.”

Vitaly Tretyakov justifies sexual harassment and violence against women. After the scandal with the Duma member Slutsky, who obsessively harassed female journalists, Tretyakov said that he did not see anything bad in it: “He [Slutsky], like any normal man, in certain circumstances could put his hand on woman’s knee or some other place.”

Tretyakov is a typical example of a pseudo-intellectual who is in demand by the Putin regime. His ease in making conspiracy and inhumane statements are explained by the fact that he had already been part of the propaganda machine of the totalitarian communist regime. Taught on the examples of Soviet propaganda, Tretyakov tells his students that “you need to study not only the classical Western theories of journalism but also the Marxist-Leninist one.” Thus, he normalizes the propaganda discourse and passes it on to the next generation, reducing the standards of journalism to simply serving the interests of the ruling party. We would like to believe that such skills will not be in great demand in future free Russia.