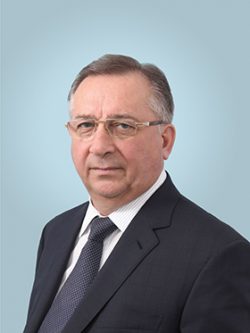 Chairman and President of Transneft (2007 - to date), retired major general of the FSB.

TOKAREV, Nikolay Petrovich (b. 1950 in Karaganda) graduated from the Karaganda Polytechnic Institute with a degree in electrification and automation of mining in 1973. For several years, he worked at mining enterprises in Kazakhstan, where his task was to monitor anti-Soviet sentiments among workers and to prevent the disclosure of classified information. In 1978, Tokarev enrolled in a two-year study at the KGB Higher School in Moscow. He began his career in the Main Directorate of the KGB, and soon after graduating from the Higher School in the early 1980s, he was transferred to East Germany. There he met and patronized Vladimir Putin, who arrived in Dresden in 1985. In 1990, Putin returned to Leningrad, while Tokarev remained in Germany for another year and was transferred to Berlin to “monitor the behavior of employees.”

From 1993 to 1996, Tokarev headed the department of external relations at the Russian-German Leasing Company, a subsidiary of Sberbank. Then, at the suggestion of Putin, he became deputy general director of the state-owned enterprise for managing the property of the Office of the President of Russia abroad. Since the summer of 1999, Tokarev has been the head of the security service, then vice president of Transneft. He oversaw the foreign-economic bloc, foreign projects, and analytical work. With the election of Putin to the presidency, Tokarev received the post of General Director of Zarubezhneft. In 2007, he was appointed Director of Transneft, the world's largest pipeline company, which pumps about 90% of Russian oil and 26% of its refined products and is owned by the state.

Once a communist informer Nikolai Tokarev, thanks to his former colleague, became the head of the world's largest oil pipeline corporation. It is noteworthy how quickly Putin has placed his closest colleagues and associates in key places in state-commercial structures since he arrived in the Kremlin. Tokarev is one of the most important members of the ruling group. The flow of petrodollars, which have been under their control for twenty years, serves primarily to maintain the regime’s power, strengthen and enrich it, and spread its corrupt influence outside the country.

In 2004, according to the UN report of the commission of Paul Walker, investigating frauds around the UN program Oil for Food, the companies of Putin’s friends Gennady Timchenko (Gunvor) and Zarubezhneft, headed by Nikolai Tokarev, cooperated with the Saddam Hussein’s regime. According to the report, the companies were involved in the sale of oil for about $500 million.

In November 2010, Transneft’s minority shareholder, Aleksey Navalny, published an investigation where he found out the company's unjustified funds spendings in the construction of the East Siberia-Pacific Ocean oil pipeline, which he estimated at $10 billion. Tokarev linked Navalny’s actions with the “information campaign” against Transneft. Navalny demanded Tokarev provide copies of the minutes of the meetings of the Board of Directors to check some of his assumptions, and the court confirmed his right as a minority shareholder on this. However, in an interview with the Izvestia newspaper in May 2011, Tokarev said: “We are not providing anything to the crooks and are not going to do it.”

According to some experts, Transneft is used to finance the business of the Summa Group, controlled by the Dagestan oligarch, and, as it is believed, the “wallet” of Dmitry Medvedev, Ziyavudin Magomedov. In 2014-2016 alone, Transneft lost more than 80 billion rubles in the use of derivative financial instruments and about 19 billion rubles in investments in Vneshprombank and Interkommerts Bank. Transneft's total losses in 2014 and 2015 amounted to more than 100 billion rubles, which is two times higher than all dividends paid in the company's entire history.

In 2016, an investigation by the Organized Crime and Corruption Reporting Project (OCCRP) revealed numerous ties between the companies of relatives and friends of the head of Transneft and enterprises that provide services to the state company. As noted in the investigation, Tokarev’s daughter Maya Bolotova, who applied for Cyprus citizenship in 2014, indicated her Cypriot address at the location of Ronin Europe office, a subsidiary of the Ronin Group, which specializes in trust capital management and works with the pension fund of Transneft.” In total, it managed 64 billion rubles in 2015. The main source of these funds was Russian state-owned companies, including Transneft. Besides, the members of the Tokarev family own expensive property in Croatia and Latvia, however, this property has not been declared, as required by law.

The result of Tokarev’s activities, as well as other Putin’s friends in the management of state-owned companies, is lost opportunities and billions of dollars that have passed by ordinary citizens of Russia. This money settled in offshore havens, in luxury real estate in the Mediterranean, and was spent on the adventures of intelligence and state security agencies inside Russia and abroad. It is necessary to realize that removing the KGB yoke and bringing the leaders of the current regime to an account will open up opportunities for real, rather than declarative, economic growth, increased prosperity and improved quality of life for millions of Russians, as well as peace and stability in Europe.