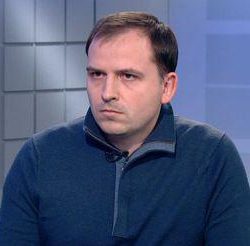 SYOMIN, Konstantin Viktorovich (b. 1970 in Sverdlovsk) was born into the family of an engineer and subsequently a member of the city council from the United Russia party. While still a freshman in the Faculty of Journalism at Ural State University (graduated in 2001), he began working in television. He worked for local TV companies ASV, ATN, was the host of the weekly newscast On The Eve, and as a war correspondent, he made trips to Dagestan and Chechnya. On one of the trips to Chechnya, an officer Yuri Ilchenko was killed by poisonous gases through the fault of Syomin. He was a correspondent for Expert magazine in the Urals region and met with top Russian oligarchs.

In November 2000, Konstantin Syomin became a correspondent for the Vesti program on the state TV channel RTR (subsequently, Rossiya, now Rossiya-1, belonging to the state media holding VGTRK), and prepared reports for the Vesti Nedeli weekly newscast. From January 2004 to March 2007, he was the head of the VGTRK correspondent's office in New York. In April 2007, he became the host of Vesti and also hosted the nightly newscast Vesti+. In the same year, he was awarded the medal of the Order of Merit for the Fatherland. In 2012, he graduated from the Department of Documentary Studies at New York University.

From April 2014 to March 2019, Konstantin Semin hosted the Agitprop (Agitation and Propaganda) program on the Russia-24 TV channel. He became famous for the propaganda film Biochemistry of Betrayal in February 2014, directed against opponents of the ruling regime in Russia. He maintains the political blog AgitBlog, where he expresses his communist and pro-Putin views. In the fall of 2017, he took part in the presidential primaries of the Left Front. The wife of Konstantin Semin, Marina, along with his son Vasily has been living in the United States since 2017 and, presumably, has American citizenship.

Aggressive pro-Kremlin propaganda; libel and provocation against the democratic opposition.

It is difficult to find a more controversial propagandist-provocateur in the Russian media than Konstantin Semin. An offspring of a prosperous family who has lived in the United States for many years and has a family across the ocean, he is one of the most odious advocates of neo-Sovietism and whistleblowers of “Vlasovites” and “traitors” among the Russian liberal and nationalist opposition. Until March 2019, he served as an anti-capitalist mouthpiece on Russian television, which attracted the leftist and communist electorate to support the Putin regime. At the moment, he switched to propaganda work on the internet, where he poses as a left “alternative” to the existing system, however, avoiding criticism of its criminal-Chekist basis and personally of President Vladimir Putin.

In 2008, Konstantin Syomin provoked an international scandal with his comments on the internal political situation in Serbia, which he broadcasted on the Vesti + program on the Rossiya TV channel. “A few years ago, the country, stunned by liberal promises, wept the Western puppet of Zoran Djindjic, a man who ruined the legendary Serbian army and special services, sold heroes of national resistance to The Hague for abstract economic assistance and received a well-deserved bullet for this,” he said commenting on the unrest in Serbia caused by the declaration of independence of Kosovo. These statements were discussed in the Serbian parliament, and calls were made to recall the Serbian ambassador from Russia. During an official visit to Serbia, the Russian delegation led by Prime Minister Viktor Zubkov assured that Syomin’s remarks did not reflect the official position of the Russian authorities.

The most scandalous product of Konstantin Syomin was the pseudo-documentary film Biochemistry of Betrayal. It aired on the state TV channel Rossiya-1 in February 2014, at the height of Euromaidan in Ukraine, and was one of a series of accusatory films about the opposition. In this film, Syomin compared all those who disagree with the Kremlin’s policy with the general Andrey Vlasov, commander of the anti-Soviet Russian Liberation Army (ROA) and head of the Committee for the Liberation of the Peoples of Russia (KONR) during World War II. In the film, Syomin concluded that the German command, which lured Vlasov to its side, after the end of the war was overrun by the USA. They continue to conduct a “psychological war” under American leadership, undermining the confidence of Russian citizens in the ruling regime.

It is noteworthy that while arranging interviews with the participants of the film, Syomin and the administration of the TV channel deliberately withheld from them the true purpose of the film, and they finally showed only selected, the most controversial fragments. Former Moscow Mayor Gavriil Popov, human rights activist Sergey Kovalev, creator of the Don Cossacks Against Bolshevism museum, Vladimir Melekhov, politicians and bloggers Valeria Novodvorskaya, Alexei Shiropaev, Ilya Lazarenko, Dmitry Savvin and others became victims of the provocation of Syomin and VGTRK. After the release of the film, Syomin admitted that he lied and provoked his interlocutors.

As a full-time propagandist on the state television channel, Syomin continued to incite anti-Western and anti-Ukrainian hysteria, as well as attacks on the Russian opposition. He directly participated in the persecution of the opposition politician Boris Nemtsov, who was killed on February 27, 2015, in downtown Moscow. His name was mentioned in the Nemtsov List, a list of journalists who incited hatred towards ideological opponents of the Putin regime inside the country. Representatives of the Russian opposition presented the report on the activities of these propagandists in the US Congress and proposed to include them in the Magnitsky Act’s list of human rights violators. Konstantin Syomin repeatedly publicly expressed support for Vladimir Putin, and also mocked the victims of the Holodomor organized by Stalin’s regime.

In recent years, Syomin has been diligently creating an image of a critic of the current regime “from the left,” while often expressing opinions that are notorious even by the standards of Russian officialdom. However, he remains part of the system, and his inhumane views fit into the framework of pro-government discourse. His role in fueling an atmosphere of hatred in Russian society against opponents of the regime is well documented. He will no longer be able to escape from his biography, and, if the people of Russia have sufficient political will, he will be held responsible for his hypocritical rhetoric and assistance in turning the country into a dictatorship.