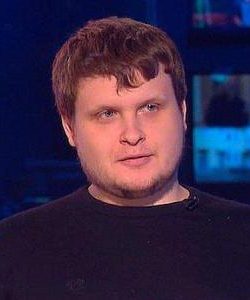 STOLYAROV, Alexey Vladimirovich (also known as the Pranker Lexus) was born on September 16, 1987, in Sverdlovsk (Yekaterinburg). There is no available information about his early years and origins, but as he claims, he received an economics degree, after which he “worked with public procurement in commercial organizations.” Stolyarov began with phone pranks in early youth. At some point, the government put an eye on a young man and he started to do a political prank in the government’s interests. Fame came to Stolyarov in 2012, when he tried to provoke the exiled oligarch Boris Berezovsky to discuss the financing of all-Russian protests against falsified election results in 2011-12.

However, Lexus received all-Russian fame by working in a duet with Vladimir Kuznetsov, Pranker Vovan, against the internal and external opponents of the Kremlin. In 2016, Stolyarov and his colleague hosted the Call show on NTV. The men were also presenters of the Telephone Guys program at the Komsomolskaya Pravda radio station. The prankers admitted that they had previously received paychecks from the LifeNews propaganda channel.

1. Conscious provocations against political opponents of the Kremlin.

In 2016, Lexus called the Krasnoyarsk lawmaker Konstantin Senchenko, impersonating opposition activist Ilya Yashin. Shortly before this, the lawmaker had condemned the statements of Ramzan Kadyrov that “non-systemic opposition” should be treated as enemies of the people. During the call, the pranker impersonated Ilya Yashin and advised him to apologize to the Chechen dictator. The very next day, the Senchenko publicly apologized.

Together with Kuznetsov, they called the opposition politician Boris Nemtsov (later murdered near the Kremlin), trying to get him crazy, as well as the late Valeria Novodvorskaya, posing as Anna Politkovskaya and Pavel Astakhov, who had already been killed then. However, the most resonant was the conflict between the prankers and Mark Feygin, when he was a lawyer for the captured Ukrainian officer Nadezhda Savchenko. The conflict erupted in March 2016, after the appearance of a fake letter addressed to Savchenko, allegedly from the President of Ukraine Petro Poroshenko. The fake letter said that “the issue will be resolved in favor of the truth soon” and that there is no need for a hunger strike. After it became known that it was the prankers who wrote a letter to Savchenko, Feygin announced his intention to bring the prankers to justice for the violation of the secrecy of correspondence, and they, in turn, tried to provoke Feygin for a fight in one of Moscow's cafes. A month later, the investigating authorities of Ukraine opened a case against Stolyarov and Kuznetsov.

2. Anti-Ukrainian propaganda and aiding the occupation administrations of “DPR”, “LPR” and “The Republic of Crimea.”

The activity of pro-Kremlin prankers reached its greatest scope with the outbreak of the Kremlin's armed aggression against Ukraine. They, easily getting phone numbers, called Igor Kolomoisky, Dmitry Yarosh, Mikhail Saakashvili, Vitali Klitschko, and President Petro Poroshenko. After the publication of the call with Poroshenko, the Ukrainian president’s press secretary accused the prankers of working for the Russian security agencies. According to The Guardian journalist Shaw Walker, who investigated prankers, “the vast majority of the victims of their political pranks are Ukrainians, and their work very often corresponds to the tasks set by the Kremlin and brings information that may be useful to it.”

In November 2015, prankers said they had pranked the initiators of the civil blockade of Crimea, Mustafa Dzhemilev and Lenur Islyamov, and allegedly discovered the identity of the person who blew up electric power lines in the Kherson region. Anton Gerashchenko, a member of the Ukrainian parliament, said in response to the appearance of a “prank-investigation” that its authors worked for the Russian special services, which organized power line explosions in the Kherson region, and that evidence they used could be used against Crimean Tatar activists in the annexed Crimea.

In February 2017, prankers called NATO Secretary-General Jens Stoltenberg on behalf of the Ukrainian President and some American congressmen on behalf of Prime Minister of Ukraine Volodymyr Groysman, discussing plans for Ukraine's accession to NATO. They later called Turkish President Recep Tayyip Erdogan, Belarusian President Alexander Lukashenko, US Ambassador to the United Nations Nikki Haley, and British Prime Minister Boris Johnson. By trolling and using misinformation, prankers Lexus and Vovan provided all possible assistance to the security and intelligence agencies of the Russian Federation, misleading political leaders when the Kremlin had tense relations with these countries, “probing” them for vulnerable positions and provoking them for ambiguous statements.

Phone provocations by Stolyarov and his colleague always coincided with the state information agenda, and their records were broadcasted in the programs of federal TV channels. All of these conversations were aimed at compromising the victim, discussed as a “sensation” by the pro-Kremlin propaganda media. In turn, the propaganda used these attempts to humiliate the opponents of the Kremlin as a form of entertainment for the Russian audience, and the Russian security agencies used them to collect specific information and to form a psychological portrait of the victims, their level of awareness and plans. Consequently, pro-Kremlin prankers should be considered as one of the levers of the sabotage-propaganda, the hybrid war of Putin’s dictatorship against the opposition and the West. According to Mark Feygin, it is highly unlikely that prankers, “who know the phones and emails of top officials from everywhere, are simple small cheaters.”

Happy to Be a Weapon: Russian Prank-Callers Target Kremlin Opponents