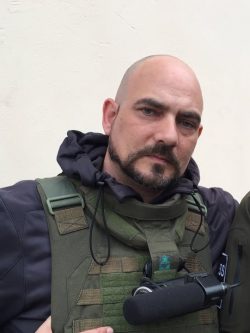 STESHIN, Dmitry Anatolyevich (b. 1972) graduated from the North-West Academy of Public Administration. He began his career in the St. Petersburg Five Corners newspaper. Then he was the editor of Kaleidoscope magazine, where he has been published since 1994. His cooperation with Komsomolskaya Pravda began in May 2000. In 2001-2003 he was the chief editor of the Komsomolskaya Pravda office in St. Petersburg. Since 2004, Dmitry Steshin has been working together with his partner Alexander Kots. Together, they covered events in Kosovo, Afghanistan, Chechnya, the countries of North Africa and the Middle East, Georgia, as well as in Ukraine from the point of view favorable to the Kremlin. In 2011, they were captured by rebels in Libya, who accused them of spying for the regime of Muammar Gaddafi. After the intervention of the Russian authorities, they were released. Among other journalists loyal to the Kremlin, Steshin was awarded a medal of the Order of Merit for the Fatherland, II degree, for “objectivity in reporting on events in Crimea” on April 21, 2014, by decree of Putin. The Security Service of Ukraine (SBU) has declared him persona non grata in Ukraine as an accomplice of terrorists.

Advocacy and misinformation in the interests of the Kremlin, aiding terrorist organizations and dictatorial regimes, war crimes, slandering the Russian opposition.

Dmitry Steshin, one of the full-time Russian propagandists specializing in covering international conflicts from a point of view complementary to the Kremlin. He covered the events of the anti-corruption revolutions in Kyrgyzstan, Mongolia, and Moldova, the armed invasion of Russia into Georgia in 2008. In 2013, he spoke at the Seliger Youth Forum before novice pro-Kremlin journalists.

It is noteworthy that Dmitry Steshin had close ties with Nikita Tikhonov and Evgenia Khasis, the murderers of lawyer Stanislav Markelov and journalist Anastasia Baburova. Tikhonov invited Steshin to work in the Russkiy Obraz magazine, and Steshin helped his friend to hide from justice: when Tikhonov was wanted in the case of antifascist Ryukhin’s murder, he lived in Steshin’s apartment for some time. It was Steshin, according to Tikhonov, who introduced him to arms dealers. Through them, Nikita Tikhonov acquired the gun, which he used to kill Markelov and Baburova. Noteworthy, that Tikhonov and Khasis coordinated their actions with people related to the presidential administration, namely, with Ilya Goryachev. In 2011, Steshin was a witness in this case. Tikhonov received a life sentence for the murders he committed, while Steshin had no consequences.

Steshin and Kots joined in the escalation of anti-Ukrainian hysteria during the Euromaidan and with the beginning of the armed aggression of Putin's Russia against Ukraine. On January 29, 2014, Komsomolskaya Pravda published a report by Kots and Steshin entitled “We survived the Holocaust, we will survive the Maidan. Maybe…” The reason for creating this text was misinformation about manifestations of anti-Semitism on the Maidan, spread on behalf of a non-existent organization. Russian pro-government media actively used this appeal to libel the participants of the Maidan as anti-Semites and Nazis. During an illegitimate “referendum” in Crimea, employees of the Komsomolskaya Pravda tried their best to downplay the size of the boycott of the vote by the Crimean Tatars. In the text “Crimean Tatars: the boycott did not take place” Kots and Steshin defended the thesis that the Crimean Tatars ignored the Mejlis’s call for a boycott. They called the decision of the community’s representative body “politically immature.” At the same time, according to the results of monitoring the turnout, the Mejlis stated that more than 95% of the Crimean Tatars boycotted the so-called “status referendum.” Both propagandists received a medal of the Order of Merit for the Fatherland, II degree, for the “correct” coverage of the Crimean events from Putin’s hands.

In May 2014, the SBU banned Steshin and Kots from entering Ukraine “due to violation of the law on the status of foreigners and stateless persons.” As reported, Steshin and Kots took part in the interrogations of the captured Ukrainian soldiers. Moreover, Steshin asked the pro-Russian militants in Sloviansk to capture the German Bild correspondent Paul Ronzheimer for allegedly “incorrect coverage” of the “referendum on the establishment of the Donetsk People’s Republic (DPR).” Nevertheless, a few days after the ban on entry, they again appeared in Ukraine, in Luhansk, controlled by the pro-Russian militants and Russian security agencies. Kots wrote about his appearance in Luhansk in his article. He did not reveal all the details but hinted that they bribed border control. Observers repeatedly linked the beginning of the shelling with the appearance of Kots and Steshin on the front lines.

As a pro-Putin propagandist, Steshin does not miss the opportunity to attack the democratic opposition in Russia. Here he, as an “expert in orange revolutions technology,” finds the machinations of overseas enemies in social conflicts provoked by the Russian authorities: over the construction of a temple on the site of a park in Yekaterinburg, in protests against the construction of poisonous landfills and incinerators in the Arkhangelsk Region and the Moscow Region, and in protest against the banning independent candidates from running in the Moscow City Duma elections. However, in domestic politics, his voice is lost against the background of more professional propagandists.

In August 2017, Dmitry Steshin was one of 20 signatories of a letter to French President Emmanuel Macron requesting to pardon the international far-left terrorist Ilyich Ramirez Sanchez, who is serving his life sentence in prison.

Dmitry Steshin and Alexander Kots should be held accountable for many years of misinformation and incitement to intolerance. The measure of their guilt in the apologetics of dictatorship is to be determined. However, they can hardly ever wash their reputation from an array of deliberate lies and propaganda.