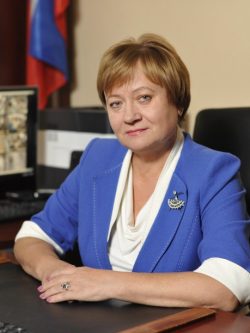 SOLOPOVA, Olga Nikolayevna (b. 1962) headed the Basmanny Court from 2002 to 2013. It was under her leadership when the doubtful extension of the arrest of Mikhail Khodorkovsky was decided there, and the expression “Basmanny justice” became an idiom. From 2013 to 2018, she was the chairman of the Tverskoy District Court in downtown Moscow. On October 11, 2016, she was elected Deputy Chairman of the Council of Judges of the City of Moscow. She was awarded the medal For Impeccable Service and the medal For Merits to the Judicial System of the Russian Federation, 2nd Degree. According to the Moscow City Court, in 2009, Olga Solopova became one of the three highest-paid chairpersons of district courts.

On December 23, 2003, as the chairman of the Basmanny Court, she ordered all journalists to be removed from the court during the hearing of the case of Mikhail Khodorkovsky. On March 12, 2004, she made five decisions on the arrest of Swiss bank accounts of legal entities and individuals, which, according to the investigation, were related to the Yukos case.

She also took part in the Bolotnaya Square case. It was the criminal persecution of opposition activists who got into clashes with police after a deliberate police provocation during an opposition rally on Bolotnaya Square in Moscow on May 6, 2012. In May 2012, she authorized the immediate removal of the opposition camp OccupyAbay on Chistoprudny Boulevard. In 2012, she unlawfully sanctioned the arrest of Leonid Razvozzhaev, accused of preparing for the riots, and in 2013, she ruled to place Konstantin Lebedev under house arrest.

On January 13, 2014, she refused to give relatives of Sergei Magnitsky the materials of a newly instituted posthumous criminal case.

On October 23, 2014, she imprisoned one of the leaders of Russian nationalist Alexander Belov (Potkin). The authorities instituted a criminal case against him after he had refused to take part in the anti-Ukrainian campaign.