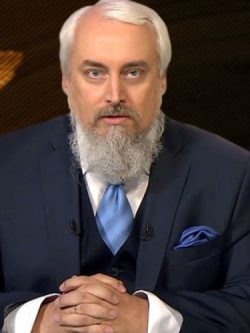 SMOLIN, Mikhail Borisovich (b. 1971 in Leningrad) graduated from the History Department of St. Petersburg State University in 1996. In 1997, he became editor of the publishing section of “Moscow” magazine. In 1999, he took up the post of editor in the "Roman Journal of the XX century." In 2004, he received a Kandidat degree in History. Later, he was the Deputy Director of the Russian Institute for Strategic Studies (a subsidiary of the Presidential Administration, the former think-tank of the Soviet KGB and the Foreign Intelligence Service).

Currently, he is the head of the Orthodox Center for Imperial Political Studies, the executive director of the Imperial Renaissance Foundation, and the editor-in-chief of several Orthodox and ultra-conservative magazines. Since 2017, Smolin has been working as Deputy Editor-in-Chief of Tsargrad TV, an Orthodox conservative TV channel founded by Konstantin Malofeev, a sponsor of pro-Russian militants in eastern Ukraine.

Defamation and inciting hatred towards opponents of the Putin regime, inciting ethnic hatred and enmity.

The example of Mikhail Smolin demonstrates the synthesis and even absorption of the official discourse in Russia by marginals and anti-Western fanatics. Smolin, calling himself a monarchist and propagandist of the Russian imperial (expansionist) ideology for several years, was the deputy director of the Russian Institute for Strategic Studies (RISI). This institute was founded by President Yeltsin on the basis of the former Research Institute of Intelligence Problems of the First Main Directorate of the KGB of the USSR as the think-tank of the Foreign Intelligence Service Of Russia. It was later reassigned to the Presidential Administration, and work there is considered a state civil service. This institute became famous for declaring the ongoing AIDS epidemic in Russia a part of the information war of the West against Russia. Reuters journalists also claimed that RISI, on behalf of Russian President Vladimir Putin, was behind developing a plan for “Russian interference in the 2016 US presidential election.”

In 2014, during the annexation of Crimea and Russia's armed intervention in Ukraine, Smolin joined the official anti-Ukrainian hysteria by publishing the article “Ukraine is Russia.” In it, he openly denied the right of Ukrainians to self-determination, Ukraine’s sovereignty, territorial integrity, and the inviolability of internationally recognized borders. In particular, he stated the following: “Ukrainian statehood is an association that survived within the borders of Soviet times quite by accident. As in the days of the Russo-Lithuanian state or the Commonwealth, entire regions that are civilizationally closer to Russia are already breaking away - and should break away. This process already has - and should continue to have - support in Russia under the slogan of “collecting the Russian land.” <...> “Ukrainism” is the revival of pagan savagery, multiplied by the steppe anarchy. <...> We need to take a tough stance that the South Russian, Malorossiya lands are an integral part of the Russian state.”

Smolin’s article on Tsargrad TV’s website about the 2020 amendments to the Constitution, which allowed Putin to rule at least until 2036, caused a great resonance. In this article, he did not hesitate in expressing himself and called those who criticized the “nullification” of the presidential terms of Vladimir Putin and the decision of the Constitutional Court “political whores.” Smolin wrote that “opposition tantrums and fits of impotent rage” about the conclusion of the Constitutional Court “have nothing to do with the law.” “This is a purely political dissatisfaction with the fact that the judges did not side with the radical opposition and did not follow the path of politicking. This defective mental “coronavirus” is transmitted through the opposition’s social networks via the oral-contact method <...> The epidemic process consists in the continuous transmission of the “disease” among the opposition,” Smolin writes. - “No one cares what the Constitutional Court wrote. All verdicts have already been handed down in advance, all assessments are posted on Twitter: all are prostitutes, whores, and corrupt creatures. It’s none of your business, the opposition bot, to read the very conclusion of the Constitutional Court. You must believe your leaders unquestioningly - they alone know what this plague looks like under the name of a non-Putin “bright future.” If you don’t like someone’s decision, did the whore always take it?”

The author of the article stated that in reality, the decision of the Constitutional Court is “very interesting” not only for professional lawyers. “Yes, and persons with reduced social responsibility (all kinds of political whores) are not sitting at the Constitutional Court, but are living in the virtual reality of their YouTube and blogs,” Smolin said. He also criticized the judge of the Constitutional Court Konstantin Aranovsky who did not participate in the consideration of amendments due to illness. The author of the article states: “Although Judge Aranovsky, with his sudden malaise, nevertheless, apparently, expressed his political “I can’t be silent, I’ll get sick.”

It is noteworthy that Smolin's article was published on the official website of the Constitutional Court. After the media drew attention to the material, it disappeared from the court site.