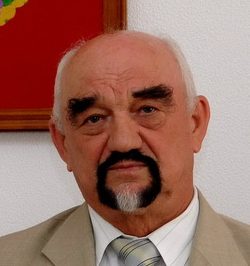 SMIRNOV, Igor Nikolayevich (b. 1941 in Petropavlovsk-Kamchatsky) graduated from Zaporizhzhya Engineering Institute in 1974. In 1966-1987 he worked at the Electric Machine-Building Plant in the city of Nova Kakhovka of the Ukrainian SSR and was a member of the Communist Party. He moved to Tiraspol in the Moldavian SSR in 1987, where he headed the Elektromash Plant from 1987 to 1990.

In 1990, he was elected to the Supreme Council of the Moldavian SSR and the Tiraspol City Council. On September 2, 1990, the congress of deputies of Transnistria, an industrially developed region of Moldova with a predominantly Russian-speaking population, took place. There, he was elected chairman of the Provisional Supreme Council of the internationally unrecognized Transnistrian Moldavian Soviet Socialist Republic (PMSSR), then chairman of the Supreme Council of the Pridnestrovian Soviet Socialist Republic. In February 1991, he was elected head of the self-proclaimed republic. On March 17, 1991, he held a referendum on the territory of Transnistria on the preservation of the USSR, banned by the Moldovan authorities. In August 1991, he supported the Emergency Committee. During the armed confrontation between Moldova and Transnistria in 1992, he was commander in chief of the PMR army.

Igor Smirnov was elected four times as the head of the Transnistrian Moldavian Republic in 1991, 1996, 2001 and 2006. In 2011, he ran for a fifth term, but in the absence of support from the Russian Federation, he finished only third. Since then, Smirnov virtually disappeared from the public eye and lives a private lifestyle, being a citizen of the Russian Federation. According to European Commission Regulation 2005/147/CFSP, Igor Smirnov, as well as his sons Vladimir and Oleg, are banned from entering the EU.

Violation of the territorial integrity of the Republic of Moldova, forcible retention of power, corruption, assistance to criminal business, embezzlement of Russian taxpayers’ money.

Events 1990-1992 in Moldova and, in particular, in Transnistria originate from the Soviet policy of national-territorial structure and national-cultural policy. Therefore, we will not give assessments or take sides in the conflict, both of which were rooted in the Soviet communist nomenclature and deliberately incited ethnic hatred. However, the authorities of the self-proclaimed republic focused on preserving their territory as part of the USSR from the very beginning, and then on an alliance with the Russian Federation, while the independence of this territory was never recognized internationally, including by the Russian Federation. Thus, from a formal point of view, Smirnov, as one of the leaders of Transnistria since 1990, can be accused of violating the territorial integrity of the Republic of Moldova and participating in illegal armed groups as commander in chief of the “Armed Forces of the PMR.”

We can judge the results of those events and the role of Igor Smirnov in them. For almost 30 years, the once-industrial stronghold of Moldova has turned into a black hole of Russian humanitarian and financial assistance, a smuggling center and a tool for the Russian Federation to destabilize the situation in Moldova and the neighboring regions of Ukraine.

So, shortly after the end of hostilities, Igor Smirnov came into conflict with the commander of the 14th army of the Russian forces stationed in Transnistria, Lieutenant General Alexander Lebed, who accused the Transnistrian leadership of corruption and abuse of power. Media associated the dismissal of Lebed from the armed forces of the Russian Federation in July 1995 with his conflict with Smirnov. Since then, the breakaway republic has been living in a state of permanent socio-economic crisis. The PMR administration has traditionally blamed external circumstances for its plight: economic blockade, non-recognition, double pressure from Moldova and Ukraine, etc. Until a certain time, subsidies from Moscow and privatization of enterprises saved the situation, as in 2003-2005 almost all of them, including the Kuchurgan Power Plant, were sold to Russian businesses.

In 2005, the Sheriff company received a monopoly on the import of almost all goods and was exempted from customs duties and excise taxes by Smirnov's special order. Thus, a unique model of “monopolizing” the country's economic space appeared: only a tenth of the goods imported to Transnistria from abroad is being sold within its borders. Everything else is smuggled into Moldova, Ukraine, Russia, and the EU.

In August 2011, Russia's Investigative Committee began checking the distribution of financial assistance that Russia has provided Transnistria since 2006. The media reported that the Investigative Committee suspected that funds were being transferred to the account of AKB Gazprombank CJSC. The chairman of the Board of the bank in 2004-2008 was the son of PMR president Oleg Smirnov, and the president of the bank was Oleg’s wife Marina. On October 28, 2011, the Investigative Committee opened a criminal case against Oleg Smirnov on charges of embezzlement of 160 million rubles sent by Russia to Transnistria as humanitarian aid. The Kremlin refused to support Smirnov in the 2011 elections, and he lost. However, the next head of Transnistria, Yevgeny Shevchuk, was able to stay in power for only one term and was accused of corruption and embezzlement too. His successor was Vadim Krasnoselsky, the former head of the security service of the infamous Sheriff company, which, besides the monopoly on duty-free import of goods, is accused of contract killings and racketeering. It is no exaggeration to say that Igor Smirnov used Russian taxpayers’ money to build the criminal system in Transnistria that rules the breakaway region up to date.