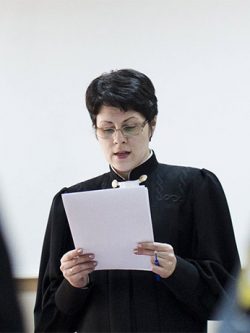 SKURIDINA, Irina Anatolyevna (b. 1980) was a judge of the Basmanny District Court of Moscow from 2008 to 2013. On July 26, 2013, by decree of Vladimir Putin, she was promoted to a judge of the Moscow City Court. Opposition activists have known judge Skuridina since 2008 when she examined 15 cases of participants in the March of Dissent in two days, sentencing twelve of them to administrative arrest and three of them to fines. Later, Skuridina refused to satisfy Ksenia Sobchak's complaint. Sobchak demanded to return her €1.5 million confiscated as “material evidence” as well as her passport for travel: the judge found the investigation’s argument convincing that this money could be used to finance the riots. Judge Irina Skuridina also took part in the Bolotnaya Square case.

Besides sentencing participants of the March of Dissent to administrative arrests and fines in 2008, she also took part in the Bolotnaya Square case. It was the criminal persecution of opposition activists who got into clashes with police after a deliberate police provocation during an opposition rally on Bolotnaya Square in Moscow on May 6, 2012.