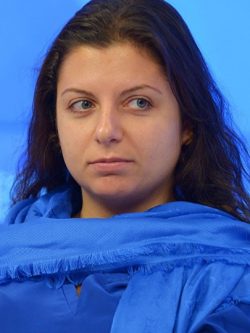 SIMONYAN, Margarita Simonovna (b.1980) is a high-rank Russian propagandist and media manager, Editor-in-Chief of the Russian international broadcaster. Born in Krasnodar, she graduated from the Faculty of Journalism of the Kuban State University and Vladimir Pozner School of Television Mastery. Soon after she started her career in Krasnodar and Rostov-on-Don, she moved to Moscow and in 2002 became a special correspondent on a federal TV channel. In 2005, she became the Editor-in-Chief of the Russia Today TV Channel (RT), a newly created international broadcaster. Since December 31, 2013, she has been the Editor-in-Chief of Rossiya Segodnya state media holding, and since November 10, 2014, the Sputnik news agency, which is an international part of the holding.

Legitimizing and promoting the Putin regime.

RT and Rossiya Segodnya, led by Simonyan, made a significant contribution to the advocacy of acts of international aggression by the Russian regime and crimes against humanity. These include the war with Georgia, the annexation of Crimea and Russian military operations in southeastern Ukraine, the downing of MH-17, the poisoning of Litvinenko, the attempt to poison the Skripals, and so on.

One of the most striking episodes in the propagandist’s career was her participation in covering the terrorist attack in Beslan in September 2004. In one of the live broadcasts, she reported 354 hostages, although by that time it was known that 1,128 people had become hostages. She also reported false information that “terrorists do not make demands”. Although the main demand of the attackers was also known and it was the withdrawal of Russian troops from Chechnya. This lie became part of a large-scale armed operation of the Russian security forces, which led to mass casualties, the escalation of violence and the strengthening of Putin's dictatorship.

In addition to managing a propaganda channel, Ms. Simonyan has always demonstrated personal support Russia's aggressive policy towards neighboring countries. Simonyan is also known as one of the most active participants in the formation and strengthening of Vladimir Putin’s regime of personal power. Simonyan was the confidant of Vladimir Putin in the March 2018 presidential election.

In 2016, the European Parliament adopted a resolution on anti-EU propaganda from Russia and Islamist terrorist groups, which aim to “distort the truth, incite fear, provoke doubt and divide the EU”. The document says that “the Kremlin has stepped up its propaganda against EU since annexing Crimea and waging hybrid war in the Donbas”. It notes that that ”the Russian government is employing a wide range of tools and instruments, such as think tanks [...], multilingual TV stations (e.g. Russia Today), pseudo-news agencies and multimedia services (e.g. Sputnik) [...], social media and internet trolls, to challenge democratic values, divide Europe, gather domestic support and create the perception of failed states in the EU’s eastern neighbourhood”. On 13 November 2017, RT America officially registered as a “foreign agent” in the United States with the Department of Justice under the Foreign Agents Registration Act.

A Voice of Mother Russia, in English

What is Russia Today?

The Guardian view on Russian propaganda: the truth is out there

A Powerful Russian Weapon: The Spread of False Stories

The West should take on the Putin P.R. machine