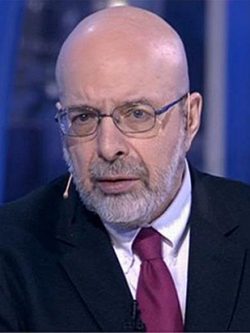 SIMES, Dimitri Konstantinovich (b. 1947) is an American political scientist and historian of Soviet descent. Born in Moscow, he graduated from Moscow State University. Despite his public anti-Soviet statements and participation in anti-government demonstrations in his student years, Dmitry got a job at the Institute of World Economy and International Relations, where he became deputy secretary of the Komsomol committee. By the spring of 1972, he had already written his Ph.D. thesis. Suddenly, in July 1972, Simis quit the institute due to his intention to emigrate to Israel. Yevgeny Primakov, a deputy director of the institute and a longtime KGB operative, approved the appeal, and less than a year later Simis settled in Washington, DC.

Immediately upon arrival in America, Dimitri decided to get involved in politics. He made contact with Richard Pearl, assistant to Senator Henry Jackson, with Brent Scowcroft, future National Security Advisor to Presidents Gerald Ford and George H. W. Bush, and with James Schlesinger, former CIA Director and US Secretary of Defense. Soon, Simis got a job at the Carnegie Endowment’s Center for Soviet and European Studies and American passport, despite FBI suspicions of his collaboration with the KGB. Since the mid-1980s, Simes has been an adviser to former President Richard Nixon. In 1994, shortly before Nixon's death, he founded the think-tank Nixon Center for Peace and Freedom (later — Center for National Interest).

Since 1985, Simes has been publishing The National Interest magazine, which promotes the theory of realism in international relations, dividing the world into spheres of influence of the “great powers”, ignoring the issues of human rights, and refusing to confront the Kremlin. After the collapse of the USSR, Simes married Anastasia Rurikova, daughter of Dmitri Rurikov, foreign policy adviser to President Yeltsin. In the 2000s, Simes became close to Gleb Pavlovsky, then adviser to the Putin Administration, and an oligarch Oleg Deripaska. Together, and with the support of Vladimir Putin, he founded the Institute for Democracy and Cooperation in New York in 2007. That was a think-tank that monitored human rights in the United States, but this project was not successful. However, since then, Simes has been a member of the Valdai Club — a forum of Western and Russian experts promoting cooperation with and “understanding” of Putin's Russia in the international political establishment.

Collaborating with Soviet and Russian special services, participating in misinformation of the Western and Russian public and promoting Putin's interests in American foreign policy.

Symes has been suspected of collaborating with the KGB since the 1970s due to the ease which he managed to leave the USSR with, regarding his Komsomol and academic career and strong ties with the highest Communist party circles.

In his magazine The National Interest, Simes and his colleagues are threatening an inevitable nuclear war between the United States and Russia if the United States does not listen to the interests of the Putin regime and continue to confront the Russian Federation. His magazine twice published articles titled “Stop Poking the Russian Bear”. According to Simes, irrational Russia, “driven into a dead-end” will destroy America because it has no other option. His book, published in 2015 in Russia, got the alarming title “Putin and the West: Don't Lecture Russia How to Live!”. However, Simes decided not to publish this book in America.

Since at least 2015, Simes oversaw Maria Butina while she was engaged in illegal lobbying activities in favor of the Russian government, and also published her in his magazine. Simes also participated in the Putin regime’s attempts to establish an informal channel of communication with Trump’s campaign, and subsequently with his administration. The investigation into Russian meddling in the US presidential election showed that Simes discussed it with Jared Kushner, the former Russian ambassador to the US Kislyak, and also Paul Manafort. Together with the latter, he organized Trump's speech on foreign policy at the Mayflower Hotel in April 2016.

When the FBI launched an investigation into Simes in the summer of 2018, he quickly relocated to Moscow. There, with the well-known propagandist Vyacheslav Nikonov, he is hosting the Big Game political TV show on Channel One. Simes has become a regular guest (as “an independent American expert on foreign policy”) on various propaganda talk shows on Russian state television. In his speeches, he invariably disseminates Kremlin’s official point of view. He accuses the West of the war in the Donbas and Syria, transfers responsibility for the downed Malaysian plane to the Ukrainian side, tells the Western public that Putin has nothing to do with the murder of Litvinenko and Skripals poisoning, and blames the Russian opposition in betraying national (de facto — Putin’s) interests. After each subsequent crime of the Putin regime, he discourages the Western establishment and the wider public from an adequate reaction, threatening that it would increase the chances of a military confrontation with Russia.

THE SPY WHO WENT BACK INTO THE COLD

A U.S. NGO Made in Moscow

The Bear and the Elephant