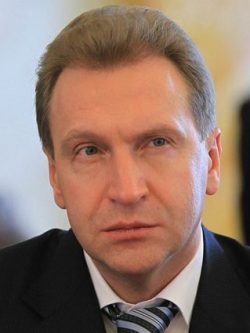 SHUVALOV, Igor Ivanovich (b. 1967) graduated from the law faculty of Moscow State University in 1993 and worked as an attaché in the legal department of the Russian Ministry of Foreign Affairs. Then he began working at the ALM-Consulting Law Office of the Moscow College of Advocates, one of the founders of which was Alexander Mamut. He held the positions of a senior lawyer and the director of the bureau. In 1995-1996, he was the founder of a few business structures, including OPT-Consortium of Banks (holder of shares in Public Russian Television).

He has been in the civil service since 1997. He served as the Head of the Department of the State Register of Federal Property of the State Property Committee and Deputy Minister of State Property. In1998, he became firstly Acting Chairman, and then Chairman of the Russian Federal Property Fund (RFBR). Simultaneously, he represented the interests of the state in Rosgosstrakh, ORT, Gazprom, and other large commercial structures. On May 18, 2000, he became Minister and Chief of Staff of the Government of the Russian Federation chaired by Mikhail Kasyanov. Three years later, he left the government and was appointed assistant and then deputy head of the presidential administration. From 2004 to 2008, he headed the board of directors of Sovcomflot and was the representative of the Russian president in the G8.

From 2008 to 2018, he served as the First Deputy Prime Minister of Russia in Putin’s and Medvedev’s governments. Since 2010, he has been responsible for coordinating the activities of federal executive bodies in interacting with Russian and foreign investors. In 2011, he oversaw the economic block of the government. Since May 2018, he has been Chairman of Vnesheconombank (VEB).

Direct implementation of the criminal policy of the Russian leadership to usurp power and complicity in national and cross-border corruption.

The main basis for Shuvalov’s accusation is his holding of the highest positions of executive power, his direct active participation in the legitimization of the Putin regime, and the creation of a state corruption system in personal selfish interests.

Back in 2009, independent analyst Konstantin Haase called Igor Shuvalov “Putin’s chief marshal,” “the engine and the main person responsible for everything.” According to him, for Putin, Shuvalov is “an impetus for anything”, he is a broad-based executor and organizer, so he is entrusted with “projects that have an economic essence, but also have an extremely important political public component, and clear deadlines that must not be disrupted.” Among such important political projects were the preparation of G8 summit in St. Petersburg and APEC summit in Vladivostok, “ideological support of national projects,” the Customs Union of Russia, Belarus, and Kazakhstan; the creation of a financial mega-regulator, the holding of the Universiade-2013, the World Cup-2018, and other large-scale projects.

Shuvalov became one of the key executors of Operation Tandem, which provided legitimization of the actual usurpation of power by transferring Vladimir Putin and Dmitry Medvedev from the president’s chair to the prime minister’s chair and vice versa. He was called the “tandem speechwriter,” who prepared both the programmatic Krasnoyarsk speech of Medvedev and Putin’s report on the Plan-2020 plan. In one of the articles on Russian corruption, columnist Michael Weiss calls Shuvalov “Putin’s long-standing consultant on economics,” using the term consigliere, which in the Russian political discourse has an unambiguous meaning of a key participant in the mafia system.

Shuvalov is known for his utter loyalty to Putin: “I want to work where the president says. I am glad for any work that the president will give.” In 2011, on the eve of a growing wave of civil protests against the irremovability of power, he was seen as the likely leader of the Right Cause spoiler party. However, he chose to be a “steam locomotive” of the ruling United Russia party, leading the regional electoral list in the scandalous Duma elections in 2011 and abandoning the mandate after the election.

The foundation of Shuvalov’s corrupt influence was laid back in the mid-90s, during the period of large-scale privatization by future Russian oligarchs, many of whom were ALM Consulting clients or partners. So, according to Forbes sources, “Abramovich and Shuvalov were already friends in the mid-90s and continue to maintain close relations... It was Shuvalov who was responsible for the legal support of the privatization of Sibneft... Participation in these projects ended for Shuvalov with an option of 0, 5% stake in Sibneft.”

Besides Abramovich, Shuvalov has close business and friendly relations with Oleg Boyko, Suleiman Kerimov, Alisher Usmanov, and other Russian oligarchs.

During his work in the government, Shuvalov was repeatedly convicted of activities incompatible with the status of a civil servant, including the acquisition of foreign assets, ownership of offshore companies, the use of insider information to buy shares, and even direct bribery. In March 2012, Alexei Navalny published information that tens of millions of dollars were transferred to the account of Shuvalov’s company from companies that belong to oligarchs Roman Abramovich and Alisher Usmanov. In 2016, FBK published an investigation stating that Igor Shuvalov, the first deputy head of the Russian government, owns ten apartments in an elite apartment complex on Kotelnicheskaya Naberezhnaya, whose market value is estimated at more than 600 million rubles. According to FBK, lawyer Sergey Kotlyarenko, who worked with Shuvalov at the Federal Property Management Agency, began to buy out these apartments for him in 2014, right after the annexation of Crimea. Kotlyarenko is the manager of all the assets of Shuvalov.

In 2014, the property of the Shuvalov family was estimated at $220 million. In 2016, an unnamed influential Russian businessman familiar with Shuvalov estimated his current wealth as “at least two to three billion dollars” in a conversation with Meduza.

Testimonial of Mark Galeotti: “The financial maneuvers that allegedly involved Shuvalov are problematic precisely because this is not an exception, but a norm. The Russian elite is constantly engaged in hiding, understating, and laundering their incomes... For those who considered Shuvalov a kind of “great white hope,” all this is a reminder that he is just another representative of the elite, a rich man who is engaged in dubious dealings, and the owner of even more dubious assets.”

Indirect evidence of Shuvalov’s complicity in the criminal regime’s activity is his receipt of the highest state awards, including orders for Merit to the Fatherland (IV, III and II degrees) and Alexander Nevsky, Order of Honor, as well as official Gratitudes of the President and letters of honor of the Government of the Russian Federation.