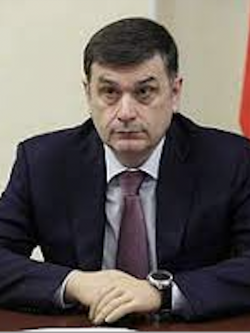 Date and place of birth: June 6, 1967 in Old Urukh, Kabardino-Balkarian Autonomous Soviet Socialist Republic. Since 2016, he has been the First Deputy Head of the United Russia faction in the State Duma, head of the intra-faction group. Since 2007, he has been a member of the State Duma from the United Russia party. In 2002, he received PhD in Economics at the Russian Academy of Civil Service. In 1997, he founded and headed the Solidarity charity foundation. From 1993 to 1997, he was a Member of the Parliament of Kabardino-Balkaria. In 1991, he started his career as a senior detective in the department for combating organized crime in the Ministry of Internal Affairs of the Kabardino-Balkarian republic. In 1991, he graduated from the history faculty of the Kabardino-Balkan State University

Shkhagoshev is a co-author of several bills restricting the rights and freedom of citizens, in particular: