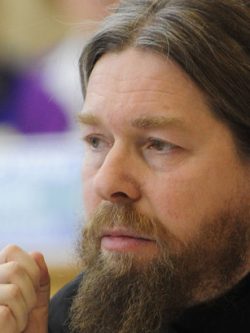 Bishop of the Russian Orthodox Church, Metropolitan of Pskov and Porkhov.

He is the chairman of the Patriarchal Council for Culture and co-chairman of the Church-Public Council for protection against the Alcohol Threat. He is a church writer and screenwriter, the author of the documentary-journalistic film “The Death of the Empire. Byzantine Lesson.” He is the chief editor of the Internet portal Orthodoxy.Ru, a member of the Supreme Church Council of the Russian Orthodox Church of the Moscow Patriarchate, and a member of the public council under the Committee on Culture of the State Duma.

He has a reputation for being close to the Kremlin and a confessor to Vladimir Putin. According to published testimonies, a retired Lieutenant General of the KGB Nikolai Leonov introduced him to Putin.

Collaboration with the KGB / FSB, complicity in anti-democratic propaganda and the establishment of a dictatorship.

Tikhon-Shevkunov is the most ambitious and probably the most influential church leader of the Putin era. He is considered the leader of the ultra-conservative faction in the Russian Orthodox Church, directly influencing President Putin. Shevkunov’s life path demonstrates that he was not accidental at this place. Even in his student years, when he was a Komsomol activist at VGIK, he was nicknamed “Sheptunov” (aka whistle-blower) due to suspicions of cooperation with the KGB. As a novice at the Pskov-Pechersk Lavra, Georgy boasted of his connections with the Committee. Once again in Moscow, he made a fast career in a short time. According to one of Shevkunov’s former colleagues at the publishing house of the patriarchy, in the early 1990s, KGB officers began to visit them, and Shevkunov eagerly talked to the officers and was inspired by KGB conspiracy theories. He argued that it was necessary to cooperate, because “only special services will be able to protect the country from Satanism and Islamism,” that “the KGB is the force that can keep the state from collapse.” When a fire broke out in one of the churches of the Donskoy Monastery in 1991, Shevkunov hastened to accuse parishioners of the Russian Orthodox Church Outside Russia of arson, calling them agents of foreign intelligence.

When the Russian Orthodox Church began to return the churches taken under communism, a struggle began in the church environment between the church bureaucracy established during the Soviet years and religious dissidents. The latter, among other things, wanted to serve not in Church Slavonic, but in the Russian language, which was strictly prohibited in the USSR. One of them was George Kochetkov. Tikhon, with the support of “Cossacks and Black Hundreds,” staged a pogrom in his church, and Kochetkov was forbidden to serve for three years. One of the participants in that provocation, now a political émigré in USA Vyacheslav Dyomin, claims that “No one understood that we were used by the Lubyanka (KGB), that they just led us and sent us to do either this or that. And it was just here when my acquaintance with Tikhon Shevkunov began. Apparently, he then began to actively cooperate with this “civilization,” and it nurtured him greatly.” Indeed, the Sretensky Monastery, where Tikhon soon became the vicar, is regarded as the favorite temple of FSB officers, located next to the FSB headquarters on Lubyanka.

Reportedly, he was introduced to Putin, then still an employee of Yeltsin administration, by former senator and banker Sergei Pugachev and the head of the analytical department of the KGB of the USSR Nikolai Leonov in 1996. Shevkunov maintained close relations with Leonov after the eviction of the “liberal” Kochetkov from the monastery. Since then, they began to communicate regularly. Following Putin, his regular parishioners became Lyudmila Putina, former Prosecutor-General Vladimir Ustinov, former Governor of St. Petersburg Georgy Poltavchenko, head of the Security Council Nikolai Patrushev, head of the Constitutional Court Vladimir Zorkin, State Duma member Elena Yampolskaya, who was the editor of Shevkunov’s book and became famous for her notorious statement: “Only two forces are capable of holding Russia over the abyss. The first is called God. The second is Stalin.” Shevkunov began to appear in the Kremlin regularly, accompanying Putin on foreign trips and publicly supporting him in his speeches.

Shevkunov can be called one of the main architects of modern anti-Western conspiracy theology among the Russian authorities. Back in 2008, he released a film about the collapse of the Byzantine Empire “The Death of the Empire. Byzantine Lesson,” which was broadcasted three times on federal TV channels in prime time. According to the director of the film, Byzantium had rotted from the inside, betrayed traditions and fallen victim to the ideological machinations of the “envious West.” The film is replete with analogies to the events of recent histories, such as the struggle against the oligarchs, the Orange Revolution in Ukraine, the strengthening of the “power vertical,” etc. The film justified the construction of a rigidly hierarchical authoritarian model of the state and the expansion of imperial ambitions to the detriment of the interests of the indigenous population of the imperial center. According to the journalist and publisher Sergei Chapnin, “This is an ideal presentation of textbooks of the FSB Academy in a historical analogy: a conspiracy, an implacable enemy, pressure on the government and the state through internal groups. This is the logic of the KGB Institute textbook. I have read what they wrote about Soviet history.”

The syncretic of Orthodoxy and Sovietism is another of Shevkunov’s principles. “Most of us lived in the Soviet Union. It was distorted Russia, but the real one. Our president correctly said that those who do not grieve over the destruction of the Soviet Union do not have a heart,” he once said. Despite the recognition of the continuity of Putin's Russia from the USSR, Shevkunov never condemned the Cheka, NKVD, and KGB, the direct predecessors of the FSB, those who massacred and prosecuted Christian believers and priests. Abbe Joseph Kiperman, who met with the novice Shevkunov at the Pskov-Pechersk Lavra in the late 1980s, offers his explanation: “From the very beginning, the Chekists decided to build a Soviet church so that parishioners would be just Soviet people. They wanted to leave the appearance of the church, and change everything inside. Tikhon is one of those Soviet people. The devil’s latest idea is to mix everything so that Ivan the Terrible and Saint Metropolitan Philip are together. Let there be new [anti-communist] martyrs and their [communist] tormentors who suddenly turned out to be good because political Orthodoxy sees both Grozny and Rasputin as saints, and Stalin as a faithful child of the Church. This confusion is the devil’s last know-how.”

Shevkunov also has a direct influence on certain unlawful actions of the authorities. It is believed that he was behind the criminal case against the theater director Kirill Serebrennikov in 2017, the campaign against the Matilda movie by Alexei Uchitel, as well as criminalization of “insulting believers’ feelings.” Shevkunov’s growing influence may mean his ambition to become the next Patriarch. After Shevkunov received his diocese and became metropolitan, he can apply for a patriarchal post. The Russian Orthodox Church of Moscow Patriarchate, recreated for propaganda purposes by Stalin, continues to play the government and its special services tool under Putin. The renewal that religious dissidents dreamed of did not happen in post-Soviet Russia. The spiritual life in Russia has not yet gained freedom, and Georgy (Tikhon) Shevkunov is one of the main obstacles to this.

Putin and the monk