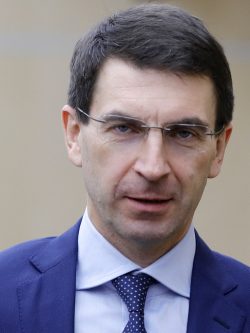 SHCHEGOLEV, Igor Olegovich (b. 1965) studied at the translation faculty of the Moscow State Institute of Foreign Languages and as part of the international student exchange program at the Faculty of German Studies of the University of Leipzig (GDR). During his studies in Leipzig, according to journalists, Schegolev met with Vladimir Putin, who headed the House of Soviet-German Friendship there and served in state security agencies. According to some reports, it was back then when Putin recruited a promising international specialist.

Igor Shchegolev began his career as an editor at the Telegraph Agency of the Soviet Union. In 1992, ITAR-TASS was opened based on this news agency. In it, Schegolev worked as an editor, and then as a senior editor of the general editorial office for European countries. In 1993, he became a correspondent for ITAR-TASS in Paris. In 1997, he became deputy head of the agency’s news service, was a member of the Kremlin pool and covered the activities of Boris Yeltsin. In 1998, he joined the Government Information Department as a deputy head of the department. In September of that year, he received the post of press secretary of the Prime Minister of Russia, Yevgeny Primakov. A month later, he was appointed head of the government apparatus information department. In June 1999, he was transferred to the position of Advisor to the Chairman of the Government of Russia, Sergei Stepashin.

On May 22, 2012, he was appointed Assistant to the President of the Russian Federation. In this position, he oversaw the Office for the Application of Information Technology and the Development of Electronic Democracy in the Presidential Administration. On June 26, 2018, he was appointed Plenipotentiary Representative of the President of the Russian Federation in the Central Federal District. In 2014, Schegolev got in the sanctions lists of the United States and Canada due to Russia’s armed intervention in Ukraine.

When Shchegolev headed the Ministry of Communications and Mass Media in 2008, the Russian Internet was still a zone relatively free of state regulation and censorship. However, after mass protests against the falsified election results in Russia and the Arab Spring erupted in 2010-2012, which, according to the Russian leadership, became possible due to unregulated social networks, the government launched an attack on the freedom of the Internet. In this regard, Putin gave an unequivocal signal to his subordinates: “When neutralizing various kinds of extremist structures, we must act as decisively as possible. To block the attempts of the radicals to use the capabilities of information technology, the resources of the Internet, and social networks for their propaganda.”

In 2011, on the initiative of Igor Shchegolev and his business partner, the “Orthodox oligarch” Konstantin Malofeev, the so-called Safe Internet League (LBI) was created, a GONGO lobbying for Internet censorship. Igor Shchegolev became chairman of the board of trustees of the organization. So, in 2011, the LBI created the inter-regional public youth movement Cyberdruzhina, which identified “dangerous content” and “extremism” on the Internet. In 2012, the LBI drafted a bill providing for the creation of a blacklist of websites. As a result, the infamous Unified Register of Prohibited Sites was created, which allowed Russian authorities to block websites out of court. In November 2016, LBI and First Cossack University signed a cooperation agreement that planned to create Cossack cyber-forces. LBI has the ambition to become a filter that selects “safe” websites. All others become suspicious by default. After that, LBI offers providers, so far voluntarily, to provide users with access only to “safe” sites, blocking everything else. A similar experiment was already tested in 2013 in the Kostroma region. The experimental joining the “safe” Internet may become mandatory overtime in the framework of Putin’s “fight against extremism.”

Schegolev was also the initiator of the bill “On the Right to Oblivion” and supported the bill on messengers, which obliges them to provide their services only to users identified by the phone number. According to Schegolev, the current model of managing the global Internet is illegitimate and needs a reform that would strengthen the role of non-Western and, ultimately, authoritarian governments, in particular Russia, in decision-making. There is a serious reason to believe that it was Shchegolev who was behind the adoption of the notorious bill on the isolation of the Russian Internet in 2019.

Besides, Shchegolev is suspected of corruption and the use of his official position to provide privileges to certain individuals. As head of the presidential press service, minister, and presidential aide, he supported his friend Konstantin Malofeev in organizing dubious business schemes in the industry, in particular, in the Svyazinvest. The former head of Svyazinvest accused Malofeev and Shchegolev of plundering budget funds and withdrawing assets abroad.

Putin's client from his student years, Shchegolev remains faithful to his patron to this day. Together, they share anti-Western conspiracy theories and the desire to isolate the country from free access to information. Along with Putin's other associates, he got on the sanctions lists. Shchegolev personifies Russia’s movement backward, towards the dystopian practices of China and Iran. In a free, European Russia, his skills and connections are unlikely to be in demand.