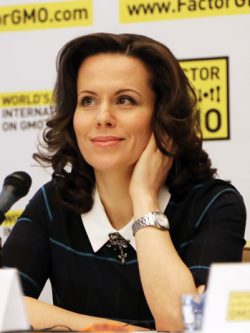 SHAROYKINA, Elena Akinfovna (b. 1979 in Dnipropetrovsk) began her career on the Dnipropetrovsk regional television while still studying at the university. She hosted programs on political and social issues and worked as a parliamentary correspondent in the Verkhovna Rada of Ukraine. In the late 1990s, as a specialist in public relations, she took part in election campaigns across Ukraine.

In 2002, she moved to Moscow. In 2003, she founded and currently leads the company Production Ru Communication Group, which specializes in providing services in marketing communications, political and social technologies. The customers and partners of Production Ru were large Russian state, commercial and public structures, including the United Russia party, the government of the Khanty-Mansi Autonomous Okrug-Ugra, FSUE RosRAO, FC URALSIB, Rosenergomash concern, Russian Union of Auto Insurers, Russian Football Union, media holding Newmedia Stars, etc. The Production Ru group also operated in Ukraine, though it was pretty quickly integrated into a Russian propaganda machine oriented to work in the West.

Sharoykina was responsible for PR-support for the election of the president of the International Chess Federation (FIDE) when Kirsan Ilyumzhinov won a controversial victory. This project brought Sharoykina the Russian White Wing PR Prize in the nomination of the Best Nonprofit PR Project of the Year. According to many experts, the election of FIDE president had signs of corruption.

Sharoykina played a key role in lobbying the anti-GMO law, which was adopted in June 2016 simultaneously with the infamous Yarovaya Package. Critics also stated that Elena was acting with the help of powerful government institutions in Russia that are in fact behind her lobbying activities. In 2016, she was included in the Myrotorets database as an accomplice to the anti-Ukrainian terrorists. Since April 2016, she has been director of Tsargrad-TV.

Sharoykina leads one of the largest non-state media holdings, specially created and for many years actively used to promote and strengthen Putin's dictatorship. Tsargrad is known for its broadcasts with pro-Russian terrorists in Donbas, anti-Ukrainian propaganda, escalation of homophobic hysteria, and misinformation about the activities of Russian opposition movements. It is worth noting that the owner of the channel, Konstantin Malofeev, finances the activities of illegal armed mercenary units from the Russian Federation in the Donbas. Due to this, he was included in the European Union and United States sanctions lists in 2014.

A joint investigation by The Insider and Bellingcat on the Kremlin’s strengthening influence in Europe indicates that Sharoykina together with Konstantin Malofeev took an active part in working with various radical political movements in Western countries to use them for spreading the pro-Putin and anti-NATO propaganda.