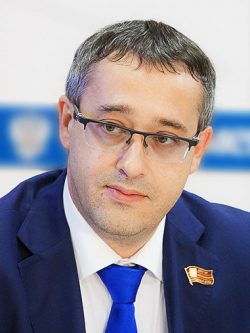 Chairman of the Moscow City Duma

SHAPOSHNIKOV, Alexey Valeryevich (b. 1973 in Moscow) was a cadet at a military institute of the USSR Ministry of Defense (then the RF Ministry of Defense) in 1990-1992, studying at the military law faculty. In 1995, he graduated from the Moscow State Law Academy. Aleksey Shaposhnikov’s career depended entirely on his father, Valery Shaposhnikov, who in the early 1990s worked in the Social Security Committee of the Military under the Russian Ministry of Defense. There, according to media, he implemented shady schemes for privatizing the property of the Ministry of Defense when heading a specialized check investment fund Star. Together with his father, they organized the PROFI Social Security Fund for military and security personnel. A 19-year-old Alexey was General Director, and Shaposhnikov Sr. became Deputy General Director.

When Putin came to power, the father and son became actively involved in politics. In 2001, Shaposhnikov Sr. was elected to the Moscow City Duma from the Unity party, which later transformed into United Russia. Shaposhnikov Jr., in turn, headed the Unity Moscow youth organization (later, the Young Guard of United Russia), while studying political science at the Russian Presidential Academy of Public Administration. From 2003, he worked as a consultant to the secretariat of the head of the State Duma apparatus and his deputies. In 2005, he graduated from the Academy of National Economy under the Government of the Russian Federation majoring in Economics, Public Finances, Public Administration.

Besides political activity, the Shaposhnikovs had common business with Viktor Baturin, brother of the wife of the then-mayor of Moscow, Yuri Luzhkov. Baturin, in turn, was the owner of the Severyanin company, where Shaposhnikov Sr. served as Deputy Director until 2004 when his son inherited the chair of the company. It is noteworthy that Severyanin owns the Fermoplast-K plant on the Yaroslavskoye highway, producing disposable food wrap. The plant was called a source of high styrene gas emissions. This scandal prevented Alexey from being elected to the State Duma in 2007. Nevertheless, he became a member of the Presidium of the Moscow City Regional Political Council of United Russia.

Aleksey Shaposhnikov climbed the party career ladder to the Moscow City Duma speaker in very greenhouse conditions thanks to his father, the party functionary of United Russia and the former member of the Moscow State Duma. While Shaposhnikov Sr. worked closely with Luzhkov’s elite in the capital, Shaposhnikov Jr. found support in the Sobyanin administration. Under Shaposhnikov, the role of the Moscow City Duma remained decorative, and it still approves the laws passed to it from the City Hall. The Moscow Duma has the smallest powers among the regional parliaments of Russia. In particular, the Moscow City Duma has no authority to establish a system of executive bodies in the region and to approve candidates for deputy mayors, heads of departments of finance and city property. The Moscow City Duma is also not entitled to approve the report of the mayor on the implementation of the budget and programs of the socio-economic development in the city. The elected representatives have no control over the budget of Moscow, which exceeds 2 trillion rubles ($30 billion). The Moscow City Duma also has no control over the disposal of the city's property.

At the same time, the Moscow and federal authorities are zealous in the elections to the Moscow City Duma, doing everything possible to prevent the majority of independent and opposition candidates from even being included on ballots. As a result, in the city, which, even taking into account mass fraud, gives United Russia no more than 37% in the elections to the State Duma, there was a parliament where 38 of the 45 members represented United Russia, and the remaining 7 were from other “systemic” parties (up until 2019).

Shaposhnikov is known for his support of the so-called “municipal filter,” the procedure for collecting signatures of members of representative bodies of municipalities in support of candidates for regional heads. The “municipal filter” has become an effective tool for the authorities to get rid of the competitors capable of winning the race. Many pro-government media hypocritically mention that Shaposhnikov “descended to help” the opposition in 2013, collecting the signatures of municipal deputies to nominate Alexei Navalny as a candidate for mayor of Moscow. However, none of these sources ever criticized the very idea of ​​such a filter, which Shaposhnikov has repeatedly expressed support for.

The erosion of lawmaking in modern Russia can be demonstrated by the following episode from the activities of Shaposhnikov as speaker of the Moscow State Duma. On December 26, 2018, there was a scandal when, at the end of the vote, representative Elena Shuvalova pointed out to Shaposhnikov that the scoreboard shows the numbers 33 “for” and 3 “against,” while there were 26 representatives in the hall. The chairman, even though he could verify the discrepancy, preferred to trust the system, and the vote was declared valid.

Aleksey Shaposhnikov, who pursued a fast-paced political career, is unlikely to stay on as head of the Moscow puppet parliament and sees it as a springboard to his career. Such people prefer to avoid publicity, and therefore it is especially important to carefully monitor them and cover uncomfortable episodes of their activities. People like Shaposhnikov are ready to trade their loyalty, destroy real political competition and block the possibilities for free expression, cultivating civic disunity and apathy.