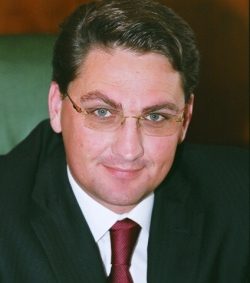 President of the Gazfond Pension Fund, a member of the Board of Gazprom Media.

SHAMALOV, Yuri Nikolayevich (b. 1970) is the eldest son of co-owner of Rossiya Bank Nikolay Shamalov and the elder brother of Vladimir Putin's son-in-law, Kirill Shamalov. From February 1997 to July 2003, he was the Commercial Project Coordinator at Siemens, Deputy Director for Sales of the Medical Solutions Department of Siemens LLC in Moscow.

Shamalov is a typical representative of the so-called Putin’s oligarchy, people who owe their multimillion and billion-dollar fortunes exclusively or mainly due to personal ties or long-standing and lasting friendships with Vladimir Putin. Moreover, this is the second generation, which cements the tendency to strengthen the clan-mafia system and the acquisition of dynastic features.

The RBC investigation notes that Yuri Shamalov, formally not the owner of the business, “is in a significant managerial position: since 2003, he has been the head of Gazfond, the largest private pension fund in Russia.” In 2015, the fund's assets were estimated at 450 billion rubles. More than half a million of Gazfond's mandatory pension insurance clients are employees of the largest Russian monopoly Gazprom and its many former and current structures: Sibur, Gazprom Media, Gazprombank, Gazprom Neft, and others.

The appointment of such a mediocre manager to such a high position in Gazfond had only one reasonable explanation, a relationship with Putin’s friend Nikolai Shamalov, as well as work in the St. Petersburg Committee on Foreign Economic Relations in the early 1990s, headed then by the future president of Russia Vladimir Putin and the future head of Gazprom, Alexey Miller.

The leadership of one of the largest financial institutions in Russia allowed Yuri Shamalov to ensure the implementation of large-scale projects that have a corrupt nature and aimed at enriching members of business clans led by people from Putin’s inner circle — Timchenko, Kovalchuk, Miller, and Shamanov. In 2011, Novaya Gazeta noted that “the eldest son of Nikolai Shamalov was in demand in the big business of his colleagues in the Lake cooperative. Under Yuri Shamalov, a deal was made to redistribute the assets of the state-owned company Gazprom in favor of the Rossiya bank.”

Yuri’s assistance was also in use for the acquisition of a $2 billion stake in Sibur by his younger brother Kirill Shamanov in 2014 through a loan from Gazprombank, which he controls together with partners as a member of the board and the head of its largest shareholder. At the same time, the transaction, according to experts, was carried out by oligarchs-friends of Putin to minimize damage from international sanctions, and Kirill Shamalov acted as the nominal owner of this asset, as a son-in-law of President Putin.